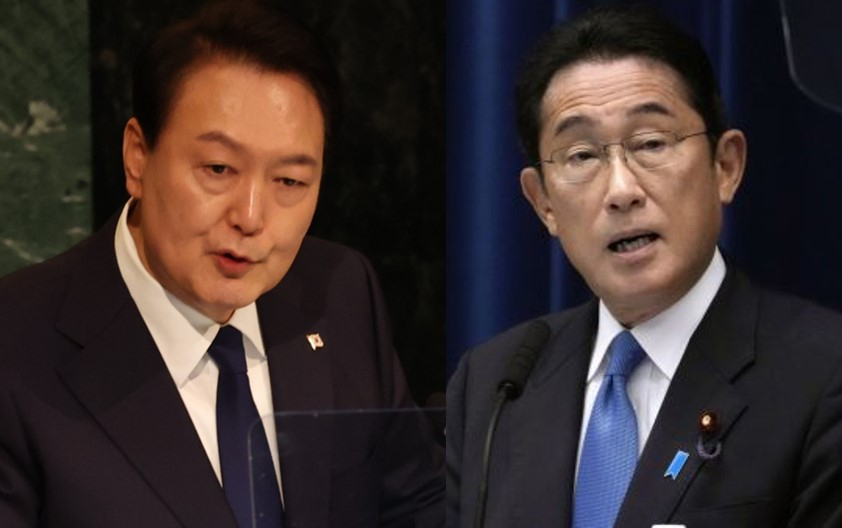 The meeting between President Yoon Suk-yeol and Japanese Prime Minister Fumio Kishida took place on the sidelines of the UN General Assembly after much controversy and led to few immediate results.

While Seoul's presidential office touted the meeting as “meaningful,” some critics say the bilateral meeting was unnecessary and that it has put Yoon in a more difficult position.

Yoon told reporters on the way to his office Monday morning that Seoul-Tokyo relations were a complicated matter that would require time and effort to resolve.

“South Korea-Japan relations aren’t resolved with a spoonful of rice,” Yoon said, using a proverb to describe the complicated nature of bilateral relations.

Despite Yoon and the presidential office’s self-praise, experts said the meeting was unnecessary for South Korea.

Professor Lee Young-chae of Keisen University in Tokyo said, “Japan clearly understands that Yoon has a low support base (domestically) and that his government is in a more fretful position. I think (the Japanese government) used his weak point.”

“From Japan's point of view, there was no need to hold a summit, but they think they will eventually be able to get something from South Korea by accepting the Yoon administration’s request,” he said.

“Because the meeting took place at the request of the Yoon’s government, Yoon now has more burden to solve pending issues, such as the compensation issue (for Koreans’ forced labor during the colonial period), on its own,” Lee said.

On the issue of compensation for forced labor, Korea proposed the idea of "compensation for conscription through private organizations" to Japan at the Korea-Japan foreign ministers' meeting. However, Japan maintains that it has no responsibility, as the issue was resolved by the 1965 treaty on basic relations between Korea and Japan.

On Friday, the Asahi Shimbun reported that Korea owes Japan because Japan did not want to meet with Korea, and there were no new results from the talks, citing one of the participants in the talks. It added that Korea should lead progress in bilateral relations in the future.

Critics also said the Korean government was too hasty in announcing the summit, with the aim of boosting Yoon’s low approval ratings on the occasion of the overseas trip.

“The principle of diplomacy is that the two nations should agree when to announce to the media. But this time it was collapsed (by the Korean side),” professor Yuji Hosaka of Sejong University, adding the Korean government’s unilateral announcement provoked negative reports from Japan.

“Even after the talks ended, Japan did not acknowledge it as a formal meeting,” he said.

Following the talks, the Korean government defined it as an "informal summit" and the Japanese government as a "meeting."

Rep. Woo Sang-ho of the main opposition Democratic Party of Korea harshly criticized the 30-minute Korea-Japan summit as "a catastrophe.”

Woo, a member of the National Assembly's Foreign Affairs and Unification Committee, said in an interview with a local radio interview on Monday, "We call it a summit but Japan calls it a meeting. It is an international disgrace.”

Woo called for the replacement of Kim Tae-hyo, the first deputy head of the National Security Office, saying that the NSO caused controversy in the process of promoting the Korea-Japan talks by prematurely announcing the summit.

Despite the fuss, other critics see the meeting itself as meaningful.

Lee Won-deok, a political science professor at Kookmin University, said “Although (the two leaders) did not resolve the pending issues immediately, the meeting itself was meaningful because it helped to find consensus and secure trust with each other.”