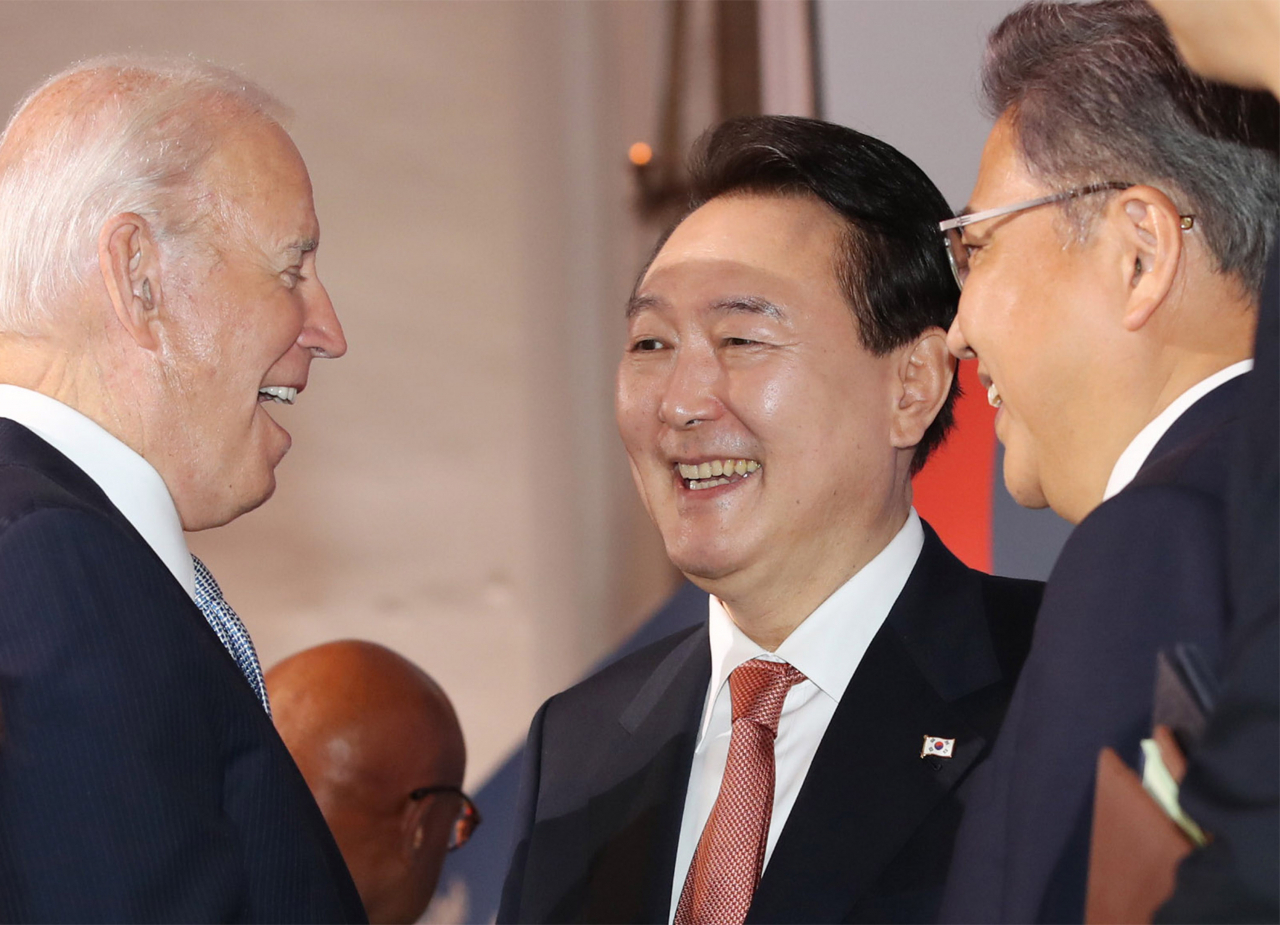 President Yoon Suk-yeol met with his US and Japanese counterparts on the sidelines of the United Nations General Assembly, but only after complications -- what the opposition party here has referred to as a debacle -- and without tangible results.

The presidential office said on Wednesday in New York that Yoon and US President Joe Biden met at a reception hosted by King Charles III in London on Sunday, the seventh financial pledge meeting of the Global Fund in New York on Wednesday and at a reception hosted by Biden the same day. They discussed the US Inflation Reduction Act, cooperation in financial stabilization and extended deterrence of North Korean threats, the office said.

“President Yoon explained Korean companies' concerns regarding the IRA and asked for close cooperation between the two countries so that the US administration can resolve our concerns in executing the IRA,” the office said.

In response, Biden was quoted as saying he is well aware of the concerns and they would continue to hold consultations between the two countries.

The office added that the two leaders agreed to work closely together to implement liquidity facilities for financial stability if necessary. In addition, they assessed that discussions between South Korea and the US are taking place on deterrence of nuclear threats, and agreed to further strengthen cooperation between the two countries to curb North Korea's weapons ambitions and come up with joint countermeasures against North Korean provocations.

The White House also released a written statement, saying the two leaders reaffirmed their commitment to strengthen the alliance and ensure close cooperation to address the threat posed by North Korea. “The Presidents also discussed our ongoing cooperation on a broad range of priority issues including supply chain resilience, critical technologies, economic and energy security, global health, and climate change.”

The US statement did not mention the Inflation Reduction Act and liquidity facilities, raised by South Korea.

Yoon’s summits with the US and Japan during his overseas trip did not go as smoothly as planned.

Earlier in the day, Yoon attended the seventh financial pledge meeting of the Global Fund in New York from 4 p.m. there and briefly encountered Biden for some 48 seconds. After the short encounter, Korean media reported that the summit with the US had fallen through. Soon after, the presidential office released a statement that did not specify when the two leaders exchanged remarks.

“A short meeting between the leaders of the US and South Korea was plan B according to Biden’s schedule change,” the presidential office later said.

A few days before Yoon left for London, Kim Tae-hyo, the first deputy director of the National Security Office, told reporters that the summits with the US and Japan were confirmed on the margins of the UN General Assembly and they were coordinating on the schedules.

The office continued to say the summit with Biden was confirmed, but eventually Yoon could not sit down for talks with the US leader.

The meeting with Japanese Prime Minister Fumio Kishida came about after much discord. Multiple Japanese media outlets denied the Korean government’s announcement, citing its government and Kishida. Japanese media even reported that Kishida was upset about Korea's one-sided announcement.

The schedule of the brief meeting with Kishida on Wednesday was not announced to Korean reporters until it took place. The meeting was held at a conference building near the UN General Assembly for 30 minutes starting at 12:23 p.m.

The talks were made in a way that Yoon visited the building, a venue for “Friends of the Comprehensive Nuclear Test Ban Treaty,” attended by Kishida. The scene of Yoon entering the building for the talks was first captured by Japanese reporters waiting to cover Kishida.

When Korean reporters raised questions about why Yoon had to go to Kishida to hold a meeting, the presidential office said it could not find a suitable place.

Opposition parties denounced Yoon's administration over the meetings with the US and Japanese leaders.

The main opposition Democratic Party of Korea criticized Yoon’s 30-minute summit with Kishida, saying, "The process and the results were humiliating."

The party's Floor Leader Park Hong-keun said at the party's policy coordination meeting Thursday that the Korean side "had been shunned by Japan even before the talks and there were even (Japanese) reports that Prime Minister Kishida expressed displeasure and asked not to meet.”

“The half-hour meeting, which was barely achieved by visiting the Japanese prime minister early this morning, was a servile appearance of sitting face to face even without the Korean flag installed due to one-sided courtship,” he added.

Wi Sung-rak, a former South Korean ambassador to Russia, said there could be variability in coordination.

“Because the US or Japan is important to us, we set aside time for the summits and believe they will definitely take place. But from the US point of view, we are one of many so the time may change or fail,” Wi said.

“In the case of Japan, it is less variable than in the US. But, due to the presence of sensitive historical and political issues, it still has variability,” he said. “It would be better if (the presidential office) would have better prepared considering such variability.”