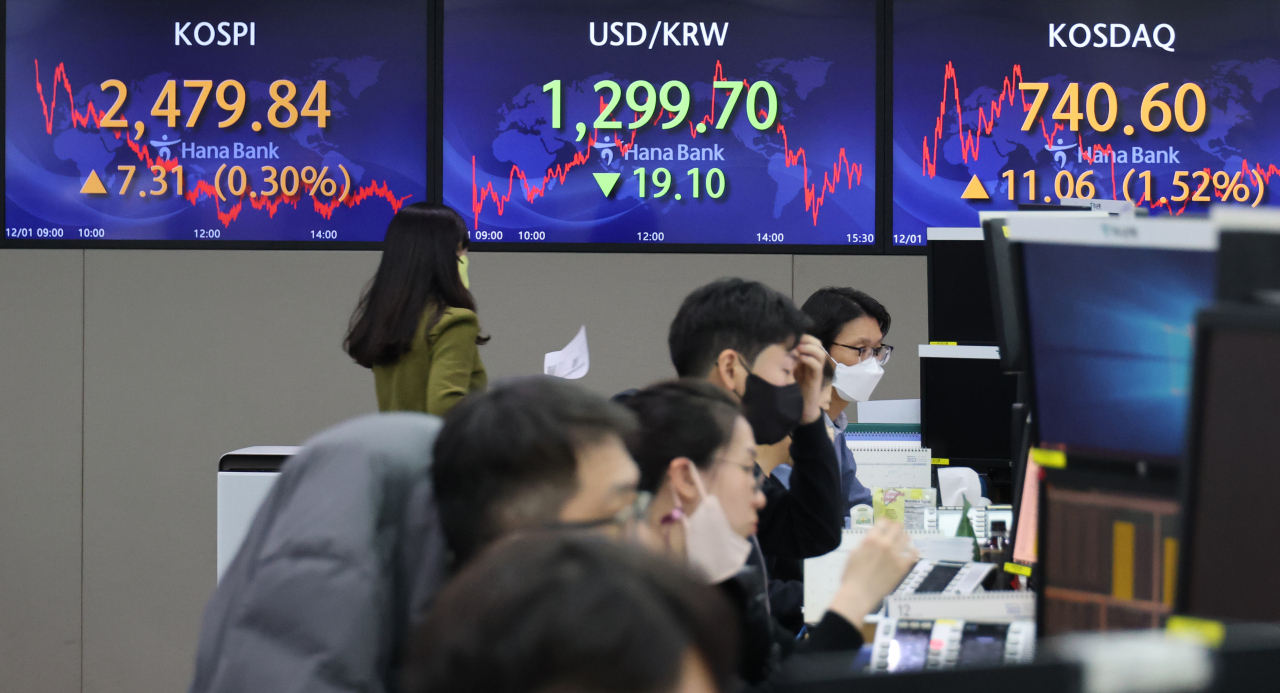 Electronic boards showing the Kospi, the currency exchange rate of the US dollar and the Kosdaq as of closing time are on display at a dealing room of the Hana Bank headquarters in Seoul on Thursday. (Yonhap)

The South Korean won rose to a four-month high on Thursday, as the US Federal Reserve hinted at a possible slowdown of its aggressive rate hikes.

The Korean currency strengthened to 1,299.7 won against the greenback as of closing time, back below 1,300 won for the first time in four months.

“The time for moderating the pace of rate increases may come as soon as the December meeting,” Federal Reserve Chair Jerome Powell said Wednesday at an economic forum.

The Fed has hiked interest rates by 75 basis points four times in a row since June to combat ongoing inflation. Though there are concerns that the Fed may continue with its aggressive pace, Powell’s speech hinted that it could go with a smaller hike of 50 basis points as soon as mid-December.

Powell, however, warned that the fight against inflation was hardly over.

“Monetary policy affects the economy and inflation with uncertain lags, and the full effects of our rapid tightening so far are yet to be felt,” Powell said.

"History cautions strongly against prematurely loosening policy. We will stay the course until the job is done.”

Encouraged by Powell’s remarks, the local currency started at 1,301 won per US dollar during Thursday's morning trading session. It gained strength to dip to 1,295.8 won at one point, for the first since Aug. 12.

Market heavyweights including tech giant Samsung Electronics led the boost on the Kospi shortly after the stock market opened.

The Bank of Korea has also hinted at possibly slowing its pace of raising interest rates.

“The monetary policy will be managed so that the housing market can attempt a soft landing,” Bank of Korea Gov. Rhee Chang-yong said Wednesday in an interview with Reuters.

“With the Fed hinting a slowdown of a rate hike, the Korean currency has become stabilized, allowing us to manage the fiscal policy more flexibly,” Rhee said.