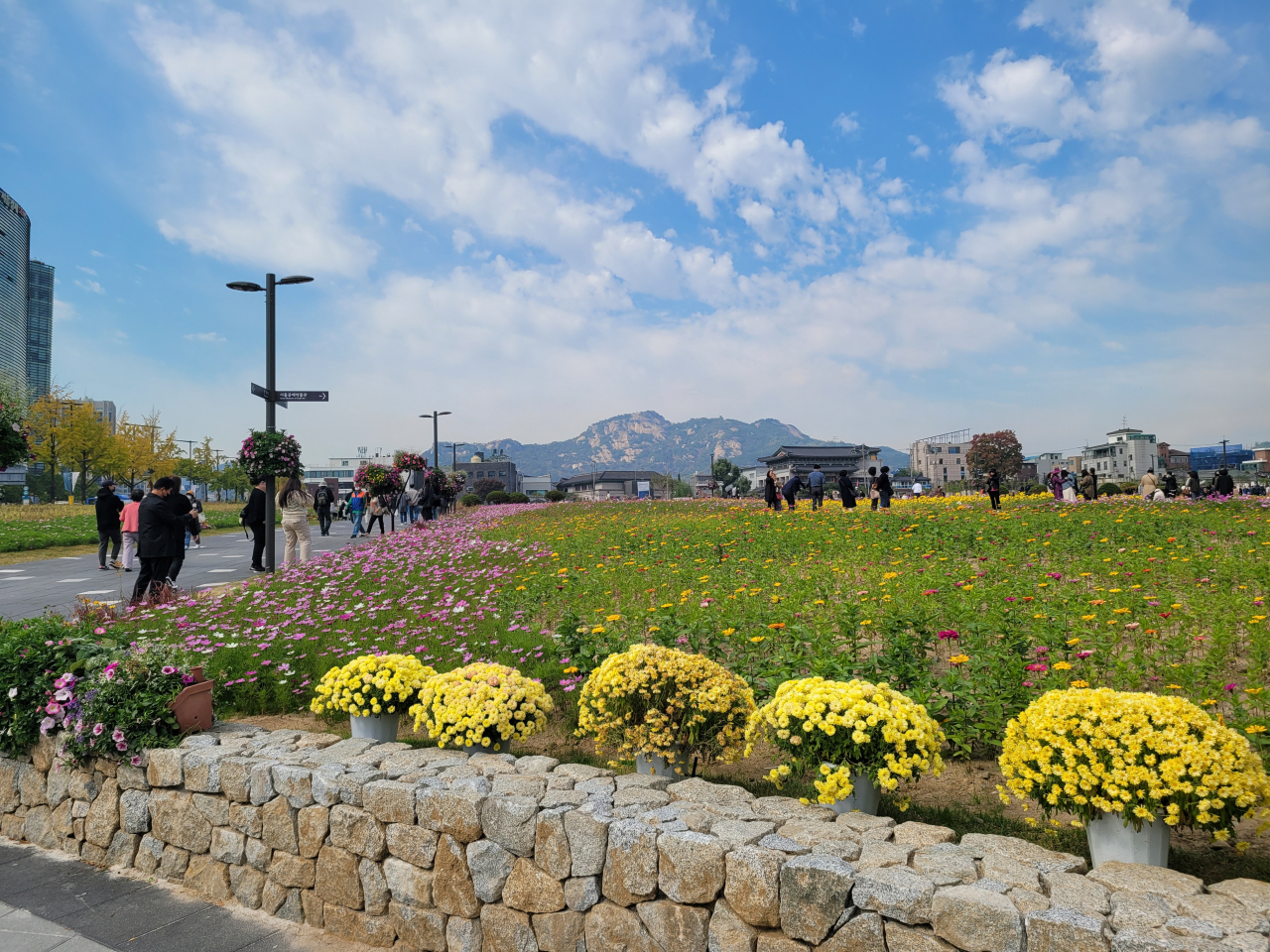 Walking westward from the main gate of the main palace Gyeongbokgung is a large open space filled with flowers and plants. The 37,000-square-meter space in Songhyeon-dong, previously blocked off by high walls on all sides, has been transformed into a park where people can now come and go freely.

“Yeorlin Songhyeon,” meaning "open Songhyeon," opened to the public in early October with its autumnal flowers in full bloom. People came to sit on benches and take in the view with fresh air. Located near Samcheong-dong, home to the National Museum of Modern and Contemporary Art, Korea, the park is frequented by people on their way to and from other museums and galleries in the area.

“It is good to see an empty space in the center of Seoul, which is always busy. I feel like I can breathe here. I wish this place could remain as it is now,” said Choi Hyun-sook, 69, who was strolling around the park taking pictures with friends.

The current arrangement is temporary, however.

The construction of a museum dedicated to the late Samsung Chairman Lee Kun-hee’s donated works of art could begin there from as early as 2024. The collection is currently stored at two national museums in Seoul. The new museum would take up about a quarter of the plot, according to the Seoul Metropolitan Government.

Located near a royal palace, the plot in Songhyeon-dong was full of pine trees during the Joseon era (1392-1910), as shown on a map of the capital city from 1780. The name “Songhyeon” refers to a pine hill. When Japan annexed Korea in 1910, Yoon Deok-young (1873-1940), a notorious pro-Japanese Korean official, built a house there and the land was subsequently used to house Chosun-Siksan Bank.

In the 1950s, US Embassy staff housing was built there and it would remain so until it was bought by Samsung Life Insurance in 1997. The land changed hands again in 2008 when it was sold to Korean Air.

Korean Air wanted to build a luxury hotel in the heart of the city, but the project stalled in the face of public opposition and numerous regulatory hurdles, leaving the land idle and unoccupied for more than a decade.

At the end of last year, the financially squeezed flag carrier, in a three-way deal, agreed to sell the land to the state-owned Korea Land & Housing Corp. for a reported 558 billion won ($416 million), which would then turn the land over to the Seoul Metropolitan Government in exchange for a plot in Samseong-dong, southern Seoul. 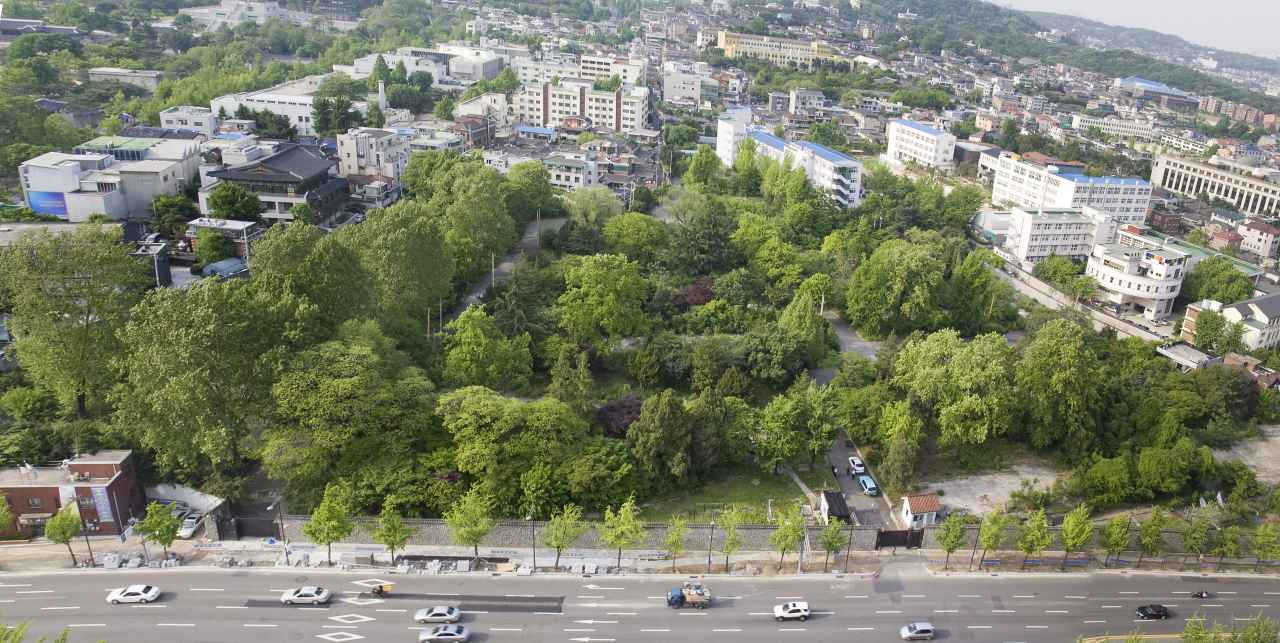 The deal is expected to be fully completed by the end of the year.

Is Lee Kun-hee Museum next?

While some hope for the land to be turned into a park, experts say such a decision would not help the neighborhood, but actually undermine it.

“A park is widely considered a good thing, but it is not true. A park can make the town lose its energy. It is important to have a facility that accompanies the park or open space, a way to ensure people use the space,” said Lee Jung-hyung, a professor at Chung-Ang University School of Architecture and Building Science, who has researched parks in Seoul.

Lee argues that many parks are effectively abandoned and neglected by residents. This is because most are managed by local governments that generally lack the necessary money and manpower to maintain the parks.

“Opening the land to the public is a welcome move because the land holds a historic meaning from the Joseon era to modern times. I am personally opposed to a building that tightly fills the area. A facility that would allow people to enjoy the empty space will be good,” said Cheon Jang-hwan, an associate professor of architecture at Kyung Hee University.

The city government aims to have the museum completed by 2027, but the process could take longer than expected as there are several steps that need to be taken ahead of the construction, the Culture Ministry said.

The Finance Ministry is currently conducting a preliminary feasibility assessment, a required step for all projects costing more than 50 billion won. The Culture Ministry has also admitted that further consensus needs to be built on the name of the museum as there has been a controversy about building a museum bearing the donor’s name, Lee Kun-hee.

“Once the plan takes shape following the feasibility assessment, we will try to form a consensus around the museum name. Then we will hold an international design contest for the museum and the park,” said a Culture Ministry official.

“The year 2027 is a tight schedule and it can take longer than that,” he added.

While the space is open to the public for the next couple of years, the land will be used as the venue for next year’s Seoul Biennale of Architecture and Urbanism, which will be held from September to October. Titled “Land Architecture, Land Urbanism,” the biennale will be helmed by the architect Cho Byoung-soo.