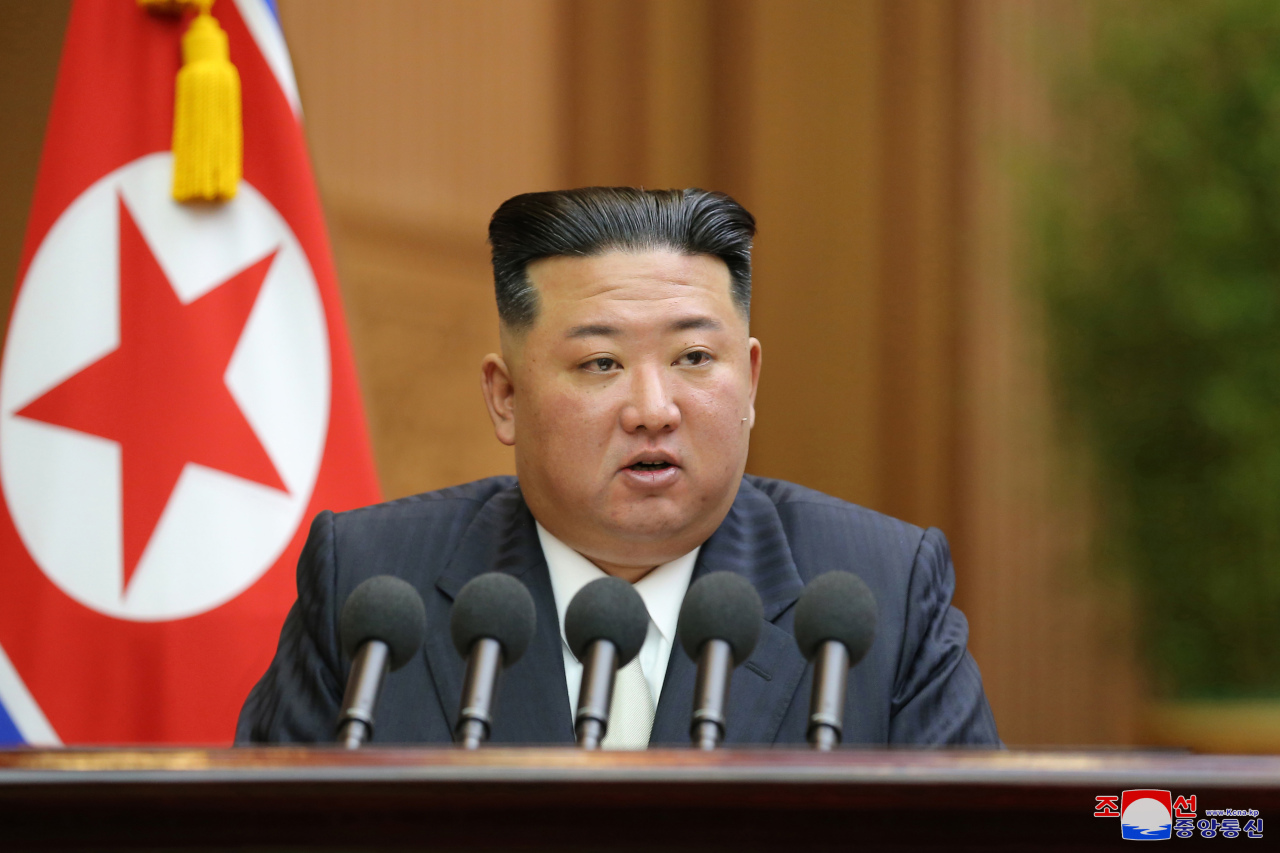 North Korean leader Kim Jong-un delivers a speech at the second-day session of the Supreme People`s Assembly in Pyongyang on Sept. 8, 2022, in this photo released by the Korean Central News Agency the following day. (Yonhap)
North Korea may conduct a seventh nuclear test after China’s party congress in October but before the US midterm elections in November, the South Korean spy agency said on Wednesday.

South Korea’s National Intelligence Service said North Korea’s completion of restoring Tunnel No.3 at the Punggye-ri nuclear testing site has increased the chance of a nuclear test during a closed-door briefing to the parliamentary intelligence committee.

The NIS said North Korea could conduct a seventh nuclear test between Oct.16 and Nov.7 should the country decide to go ahead with the plan, Rep. Yoo Sang-beom of the ruling People Power Party and Rep. Youn Kun-young of the main opposition Democratic Party of Korea told reporters after the closed-door briefing.

“The National Intelligence Service forecasts that there is a high chance that the test would be conducted after the Chinese Communist Party's 20th congress opening on Oct. 16 but before the US midterm elections on Nov. 7,” Yoo told a press briefing.

But Yoo elucidated that the South Korean spy agency raised the possibility that North Korea would conduct a nuclear test in the foreseeable future.

The assessment came after South Korea and the US have said that North Korea is ready to conduct a nuclear test at any time.

With regard to the COVID-19 situation in North Korea, the NIS raised doubts on North Korea’s public announcement that the country has eradicated the coronavirus. The South Korean spy agency said North Korea has carried out large-scale inoculations in border areas and repeatedly tightens and loosens COVID-19 curbs.

The South Korean spy agency also dismissed a foreign media report that a girl who appeared on the state-run Korean Central Television could be Kim Jong-un’s nine-year-old daughter Kim Ju-ae.

The UK’s Daily Mail first reported about the child among a pack of preteen children attending an event celebrating the anniversary of the country’s founding anniversary on Sep. 9.

“The National Intelligence Service sees that it is unlikely that the person is Kim Ju-ae when considering how the Kim family has handled family-related issues,” Yoo said.

In addition, the spy agency also confirmed the identity of an unidentified woman who was seen closely accompanying the North Korean leader at an event marking the country’s foundation anniversary in the video footage aired by the state-run television.

Youn said the woman has been identified by the NIS as Hong Yun-mi, who was a drummer at Pyongyang's all-women Moranbong Band that performed at the April 27 Inter-Korean Summit in 2018.

The NIS explained that Hong appears to be an aide to Hyon Song-wol, who serves as a vice department director of the Central Committee of the Workers' Party of Korea and is in charge of handling protocol for the leader, according to Youn.