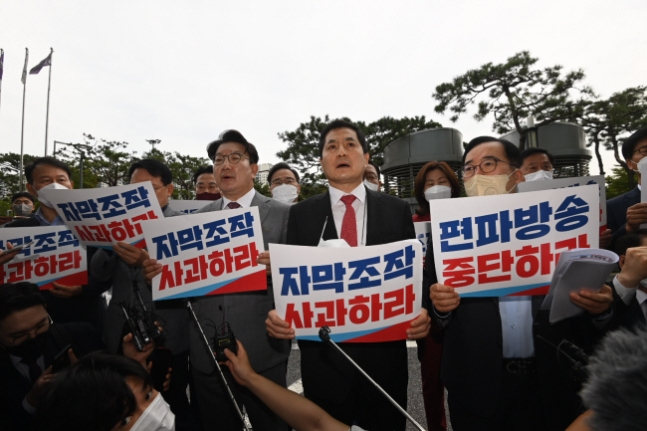 The presidential office and the ruling party are ratcheting up the pressure on local broadcaster MBC over its reporting on President Yoon Suk-yeol’s controversial use of vulgar language, against rising accusations of attempts at censorship of the press.

The presidential office said Tuesday night it sent an official letter to MBC President Park Sung-je asking for clarification on the matter.

“Regarding the MBC report, the presidential office said the subtitles were false. However, MBC did not revise the initial report but rather made additional reports, and the contents were reproduced with subtitles called ‘domestic media reports,’” the letter said, adding it damaged the alliance with the US as well as the national interest.

MBC immediately refuted the office’s claim, releasing its own statement.

“It is very regrettable that the presidential office, the highest authority, sent an official letter to the president of a public broadcasting company in the form of clarification of the reporting process, despite that there is an institutional mechanism that can object to the report,” the statement said.

“Even though most domestic media outlets reported the same, the fact that (the presidential office) sent such an official letter only to MBC raises doubts about whether it is trying to settle the controversy by sacrificing MBC,” it added.

MBC hoped that the recent attack on the broadcaster, which is being conducted primarily by some political circles, is not an attempt to “curb the public monitoring” and “criticism functions of the media.”

During his trip to New York last week, Yoon was caught on a hot mic insulting the US Congress. In the video released by local media, Yoon told his aides with vulgar language that it would be embarrassing for Biden if Congress did not approve something unspecified. The presidential office later sought to clarify that the remarks were directed at Korea's National Assembly, not the US Congress.

On Tuesday, the People Power Party launched a task force to find out the truth of what they called “MBC’s biased manipulated broadcasting.”

The ruling party is additionally urging MBC executives to resign. On Monday, some lawmakers held a press conference demanding the resignation of MBC President Park Sung-je and an apology broadcast, saying, "It is a serious manipulation broadcast that will remain as a dark stain on the media."

The party announced that it would take decisive action against Korea’s leading broadcaster MBC, which first reported Yoon’s remarks.