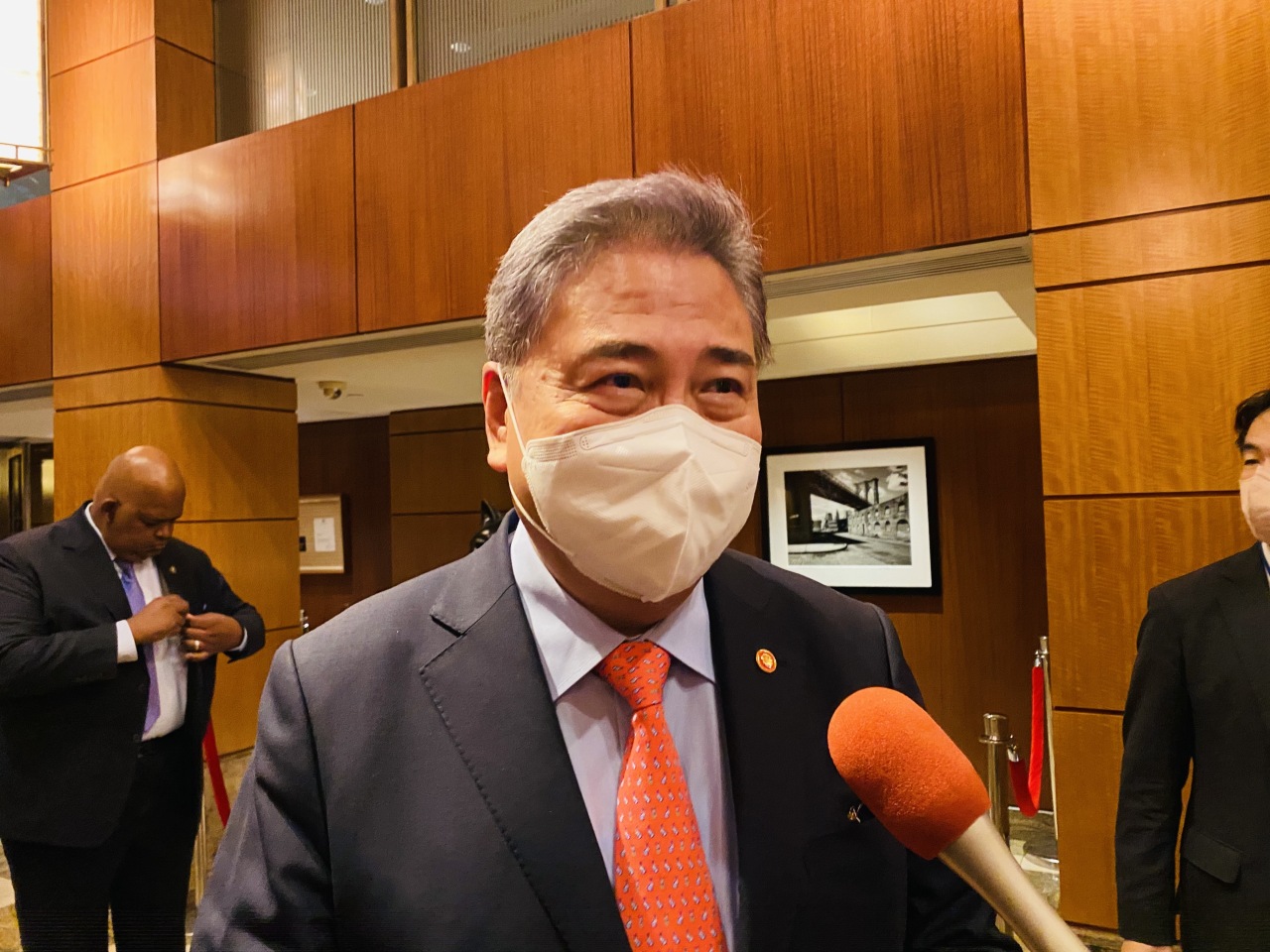 Minister of Foreign Affairs Park Jin speaks with reporters after a meeting with his Japanese counterpart Yoshihama Hayashi on Sept. 20 at a Manhattan hotel. (Yonhap)
South Korea’s main opposition is demanding that Minister of Foreign Affairs Park Jin be removed from office over what it calls the “unprecedented diplomatic disaster” that unfolded during President Yoon Suk-yeol’s recent trip to the US.

The Democratic Party of Korea convened a general meeting Tuesday afternoon and ratified a proposal to sack the top diplomat.

Park “ought to be held to account for the series of diplomatic gaffes,” the party said in a statement released ahead of the meeting, claiming that the president’s trip “did not lead to any accomplishments” and “only caused damage to the country’s international reputation.”

The party said that among other things, Yoon “appearing to insult the US Congress and President Biden” in a hot mic moment was “feared to weaken the alliance with the US.”

Last week, South Korean public broadcaster MBC released a low-definition video footage suggesting the president used coarse language as he was supposedly alluding to members of the US Congress.

Yoon’s office has denied the remarks in question, saying the president was discussing something else, and accused the broadcaster of a “misleading portrayal.”

“President Yoon and his office should know they cannot fool everybody,” said the Democratic Party of Korea’s floor leader, Rep. Park Hong-keun, on Tuesday. “Perhaps in an effort to control the damage, the president is blaming the press for reporting the truth when the problem is his language.”

In response to Yoon aides telling reporters that the president “does not recall his exact words,” the party’s top spokesperson Rep. Ahn Ho-young said during a press conference late Tuesday, “How convenient.”

“If there is something worse than foul language, it’s lying,” he said. “The president should own up to what he said and apologize.”

Following the calls to fire the foreign minister, the ruling People Power Party’s floor leader Rep. Joo Ho-young said the Democratic Party “can take advantage of its majority control in the National Assembly and push ahead with the proposal.”

Proposals on dismissing a member of the Cabinet require an affirmative vote from more than half of the National Assembly, whose majority is currently controlled by the opposition party.

“If the Democratic Party was acting in the best interest of the country, it would not do something that would restrict diplomatic activities,” Joo said.

In a statement also released on Tuesday, the Ministry of Foreign Affairs said the ministry was “working on the frontlines of national security.”

“It’s regrettable that the opposition party is willing to wield its majority power in a way that would deal a blow to South Korean diplomacy at a time when the country is facing daunting diplomatic challenges,” the ministry said.