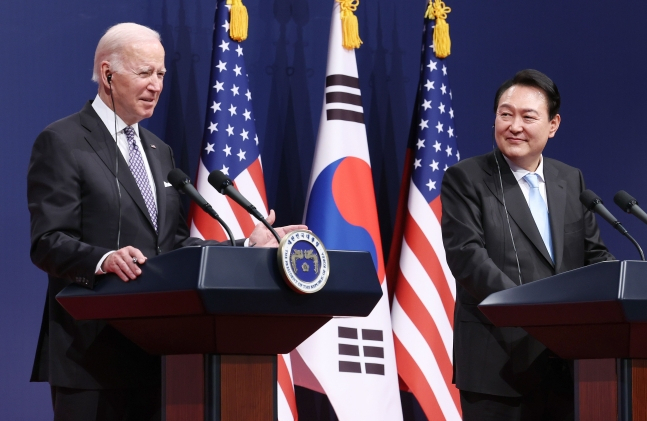 President Yoon Suk-yeol and US President Joe Biden hold a joint press conference for the Korea-US summit at the auditorium of the presidential office in Yongsan in May. / Presidential Photojournalists

President Yoon Suk-yeol is expected to hold talks with leaders of the US, Japan and China this month amid ongoing diplomatic challenges with the nations, putting his diplomatic capability to the test.

President Yoon will leave the country on Sunday to attend the funeral of Queen Elizabeth II in London on the following day. He will then move to New York, where he plans to attend and give a keynote speech at the United Nations General Assembly. There, the president is expected to hold bilateral summits with US President Joe Biden and Japanese Prime Minister Fumio Kishida. He will later meet with Prime Minister Justin Trudeau during his visit to Canada.

Separately from the trip, high-ranking Chinese official Li Zhanshu and US Vice President Kamala Harris will visit Korea on Thursday and Sept. 29, respectively, and both will meet with Yoon.

Above all, much attention is being paid to a possible summit with US President Joe Biden as economic cooperation between the two nations has appeared to be on rocky ground.

The US has stressed economic security with South Korea by encouraging investment from major Korean battery and chip firms and by pushing ahead with economic alliances, including the Indo-Pacific Economic Framework and “Chip 4” alliance. But as the US recently passed the Inflation Reduction Act and the Chips and Science Act, which favor its domestic companies, concerns are growing among Korean firms. For instance, Hyundai Motor, which ranked second (9 percent market share) in the US electric vehicle market after Tesla (70 percent) in the first half of this year, could be hit hard by the Inflation Reduction Act, which calls for suspending subsidies for electric vehicles that are not assembled in North America.

Since the Inflation Reduction Act was signed last month, the Korean government has worked to persuade the US government and Congress to resolve discrimination against Korean electric vehicles.

If Yoon and Biden meet bilaterally, issues related to the Inflation Reduction Act are likely to be dealt with as a significant item on the agenda.

A senior presidential official said on the condition of anonymity, “The US side has expressed its position to look into the IRA in detail (after the Korean side protested),” and added, “Since this issue is a very important issue for us, I think it will be raised in the bilateral talks.”

President Yoon is also expected to discuss the matter with US Vice President Harris, who is to visit Korea on Sept. 29.

The presidential office is also pushing for a bilateral talk with Japanese Prime Minister Kishida, who will attend the UN General Assembly. If the summit with Kishida is held, it could serve as momentum for a solution to the issue of compensation for wartime forced labor.

The relationship between the two nations has been thorny over the past years due to unresolved historical issues that have bubbled up. The Supreme Court justice in charge of the case to decide when to start compensation for victims of Japanese forced labor recently resigned. This has delayed the controversial procedure for compensating victims of forced labor by forcibly selling the domestic assets of a Japanese war criminal company for an indefinite period.

Yoon will also meet high-ranking Chinese official Li Zhanshu, who is leading 66 delegates to visit Korea from Thursday to Saturday. Li, the current chairman of the Standing Committee of the National People’s Congress, is the third-highest Communist Party leader.

It could pose a burden for Yoon to meet with Li after the Yoon government has normalized the Terminal High Altitude Area Defense anti-missile base in Seongju, North Gyeongsang Province, and has distanced itself from China by participating in the US-led Indo-Pacific Economic Framework and the Chip 4 alliance, which aim to hold China in check.

Park Won-gon, a professor in the department of North Korean studies at Ewha Womans University, said it does not appear that Li will make aggressive remarks about THAAD. “When looking at China's recent moves, it is trying to embrace Korea and refrain from harsh messages.”

“The most notable thing in the big framework (of Yoon's diplomacy this month) will be what kind of policy direction South Korea will show in the coming of Li and Harris between the US-China conflicts,” he said.

“This month will be an important month to show how the Yoon administration will pursue diplomacy while balancing the relations between the US and China. How to deal with North Korea will also be a common topic in the talks with the leaders of all three countries.”