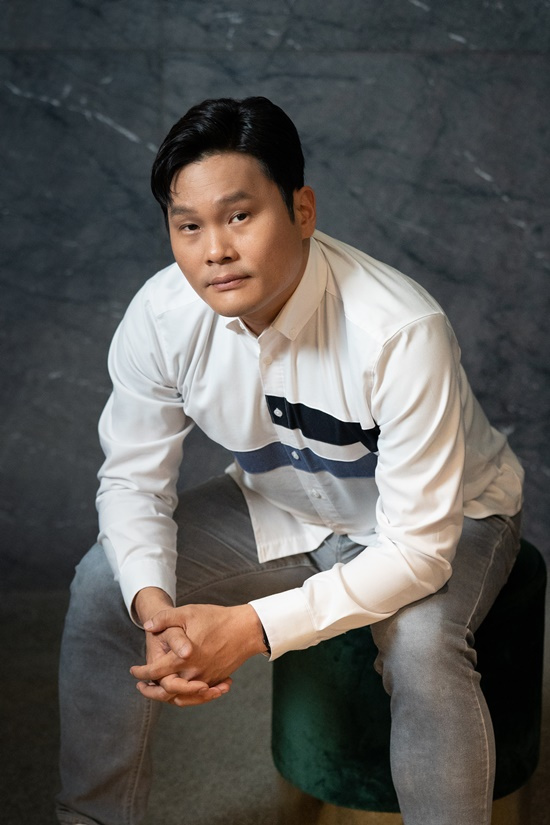 For “The Roundup” director Lee Sang-yong, filming a movie amid the COVID-19 pandemic was an experience he will not until the day he dies.

“We visited Vietnam for the first time in September 2019. We searched for locations to shoot the film and also finished casting Vietnamese actors. We planned to start shooting there at the end of February 2020. So a week before that, part of our team went to Vietnam. Actor So Suk-ku was also there, but we soon heard from the consulate that we would have to go back to Korea right away or we will all be quarantined,” said Lee during an interview via Zoom with a group of local reporters on Tuesday. “We had already spent around 1 billion won ($834,960) at that point. So I thought we wouldn‘t be able to finish shooting the film. Many films at the time could not get made. “

After a lengthy discussion, the team decided to shoot scenes in Korea first, then later film the scenes in Vietnam. But this plan had to be revised because the pandemic situation did not improve.

“We filmed the streets of Vietnam and came back. The actors had to work with a green screen and with a limited camera angles. I don’t enjoy working like this but we had to do it,” he said.

“We also had to change locations in Korea many times because we could not receive a permit to film. We had to change the script and the lines numerous times. That was really difficult,” the director added.

Lee’s debut feature, which is the sequel to the hit crime film “The Outlaws” (2017), centers on cop Ma Seok-do (Don Lee), who heads to Vietnam to extradite a suspect. But soon after his arrival, he discovers murder cases and finds out that the vicious killer (Son) has been committing crimes against Korean tourists for several years.

Although there were some bumps along the way, Lee said he was honored to work with a great team for his debut feature.

“I was stunned when I received the proposal for the movie, I could not believe that I had gotten such a great opportunity. Director Kang Yoon-sung, who was originally offered the work, could not take it up because he was working on another project,” the director said. “I had worries since the first film attracted 6.88 million viewers. People say that there are no sequels that are better than the original. So, my goal was not to make a better movie but just to do my best with what I have.”

What differentiates the sequel from the original film is the setting in a foreign country, the director said.

While the first film focuses on cop Ma Seok-do protecting Garibong-dong neighborhood in southwestern Seoul from intruder Jang Chen, the sequel takes him to a foreign country.

“I thought about how Ma Seok-do would deal with crimes happening outside of Korea. If you see movie series like ‘Die Hard,’ it is usually the protagonists that change by having some kind of new handicap or internal conflict as the series develops. But we decided to take a different road and keep the same character Ma Seok-do from the original movie and change his environment,” he said.

The director also compared the two villains -- Jang Chen (Yoon Kye-Sang) from the original movie and Kang Hye-sang in the sequel.

“Jang Chen is part of an organized crime group and aggressively expands his power in Garibong-dong. Kang Hye-sang is different because he works alone,” he said. “I did a lot of research on criminals that run from Korea. They are often living illegally in a foreign country without a proper job and will do anything for money. They are reckless and harm people they are familiar with. It is also very difficult to catch them.”

The director added that after looking into this information, he was able to create the character Kang Hye-sang, who is vicious and extremely greedy for money.

The director also briefly talked about why he selected Son for the role of Kang Hye-sang.

“He is an actor with two different sides. He has this cold side and at the same time, he has a soft side. Also during our meeting, he showed me his deep passion for the movie,” the director said. 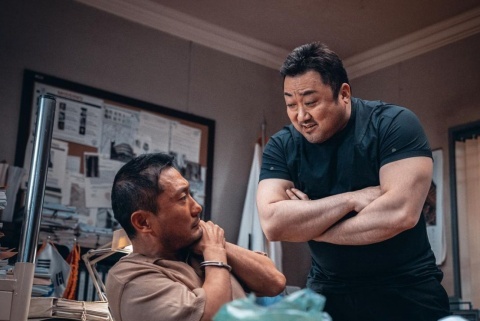 A scene from “The Roundup” directed by Lee Sang-yong (ABO Entertainment)
Toward the end of the interview, Lee also talked about the movie’s successful start, selling more than 3.55 million tickets in the first week of its release, according to the Korean Film Council.

“I am so grateful (viewers) are enjoying the movie,” he said enthusiastically. “It also encourages me to work harder on the third movie of the series, whichI am working on right now.”

“The Roundup” is now in local theaters.