[ The Korea Herald – Send E-mail ]
[Weekender] All washed up: Beach trash holds truths about North Korea
Packaging and bottles floating over from the North show development of private markets, informal economy
By Ji Da-gyum
Published : May 7, 2022 - 16:00
Updated : May 9, 2022 - 09:50 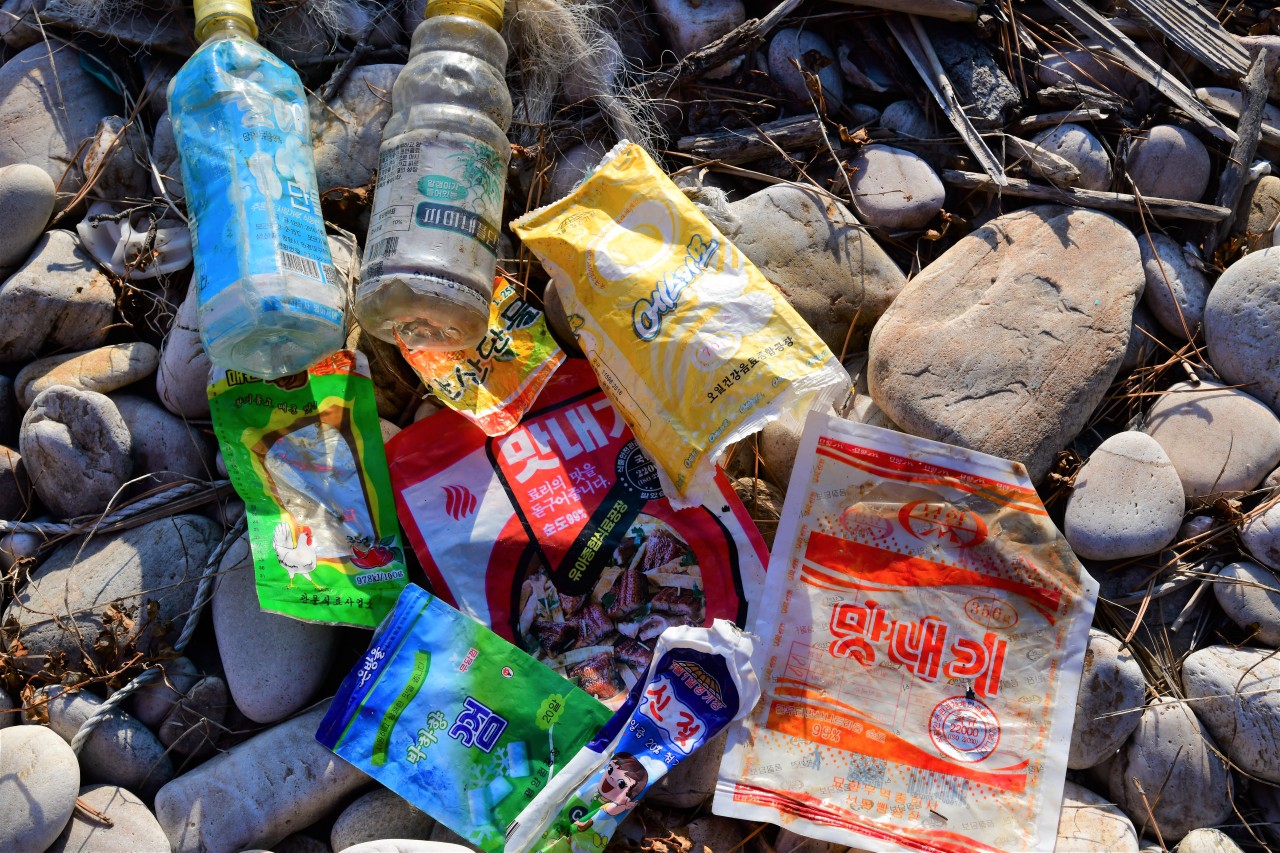 Beverage bottles, wrappers for chewing gum, condiments, ice cream and milk were found on the front-line island in the West Sea. (Photo Credit: Kang Dong-wan)
Kang Dong-wan, a 48-year-old South Korean professor at Dong-A University in Busan, has become a trash-to-treasure hunter after he realized the genuine value of trash that drifted in from North Korea along the eastern and western seaboards.

The professor views the washed-up trash as a window into the reality of North Korea and the people’s daily lives.

Kang has so far collected around 3,000 wrappers and packages of North Korea-produced items from the beaches on the West and East coasts in South Korea.

Ingredient and manufacturer information on the product packaging gives an indication of everyday life in North Korea and its economic structure. The development of industrial design, location of factories and distribution of manufacturing activities within the country through the trash. 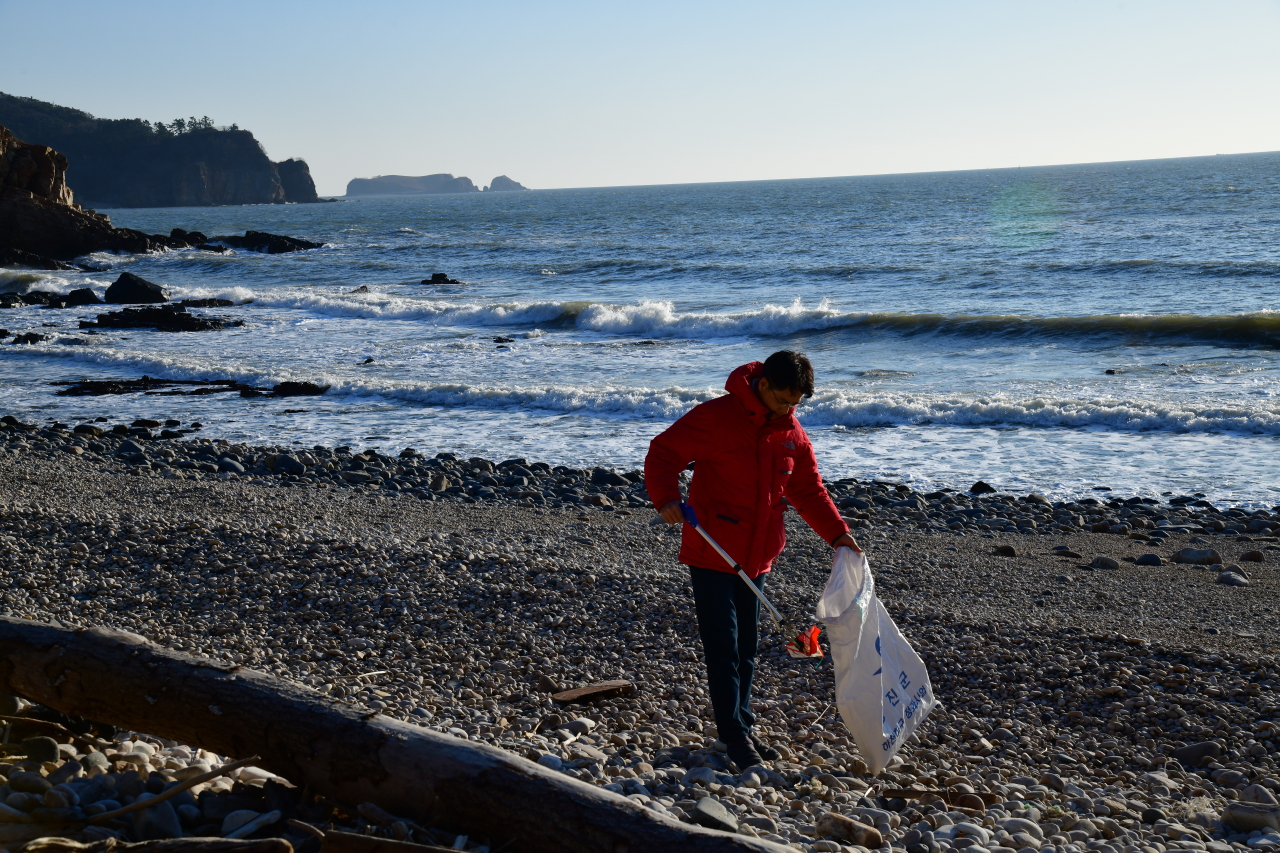 Kang Dong-wan picks up North Korean trash on Yeonpyeong Island, which lies just to the south of the disputed inter-Korean western maritime border, in December 2021. (Photo Credit: Kang Dong-wan)
Trash as a window on the North
Researchers who study North Korea always grapple with challenges in obtaining trustworthy and firsthand materials.

They often refer to reports and photos released by North Korean state-run media outlets to keep up with socioeconomic changes, mainly due to travel restrictions and the limited access to information from other sources. But the North Korean media frequently distorts things for propaganda purposes.

Kang pointed to the value of the trash as the firsthand and comparatively undistorted source of information on North Korea.

“In that context, the merit of the trash collection is that we can look into aspects of North Korea that are not choreographed or distorted by the North Korean authorities,” Kang told The Korea Herald.

The everyday supplies were produced by North Korea, distributed within the country, and used by the North Korean people.

“The products are not manufactured for show,” Kang said. “The pieces of trash are greatly important materials as they depict the lowdown of the North Korean economy and industrial structure as well as the development of industrial design and provide a better understanding of North Korean people’s lives.”

But this information-gathering method still has limitations as North Korean packaging lacks basic information such as manufacturing dates. Kang has also been unable to verify the quality of the products.

Hunting trash for information
Kang’s trash hunting began by accident on Baengnyeongdo, a South Korean island less than 14 kilometers off the North Korean coast, where he traveled in September 2020 to photograph North Korean villages.

Kang used to regularly travel to the border area between China and North Korea to take photos of North Korean cities and people with a telephoto lens, interact with North Korean people, and purchase North Korean products. He also traveled to Russia to meet North Korean workers.

Location does not matter to him as long as he can get a better handle on North Korean society. But the pandemic blocked him from traveling to China and Russia, where he could obtain relatively unfiltered and firsthand information.

But the pandemic travel restrictions made that more difficult. But when he visited Baengnyeongdo, he found he didn’t need a long lens to get a glimpse of what was happening in the North. There was information right at his feet, in the soju bottles and milk cartons that had floated across with the tide. 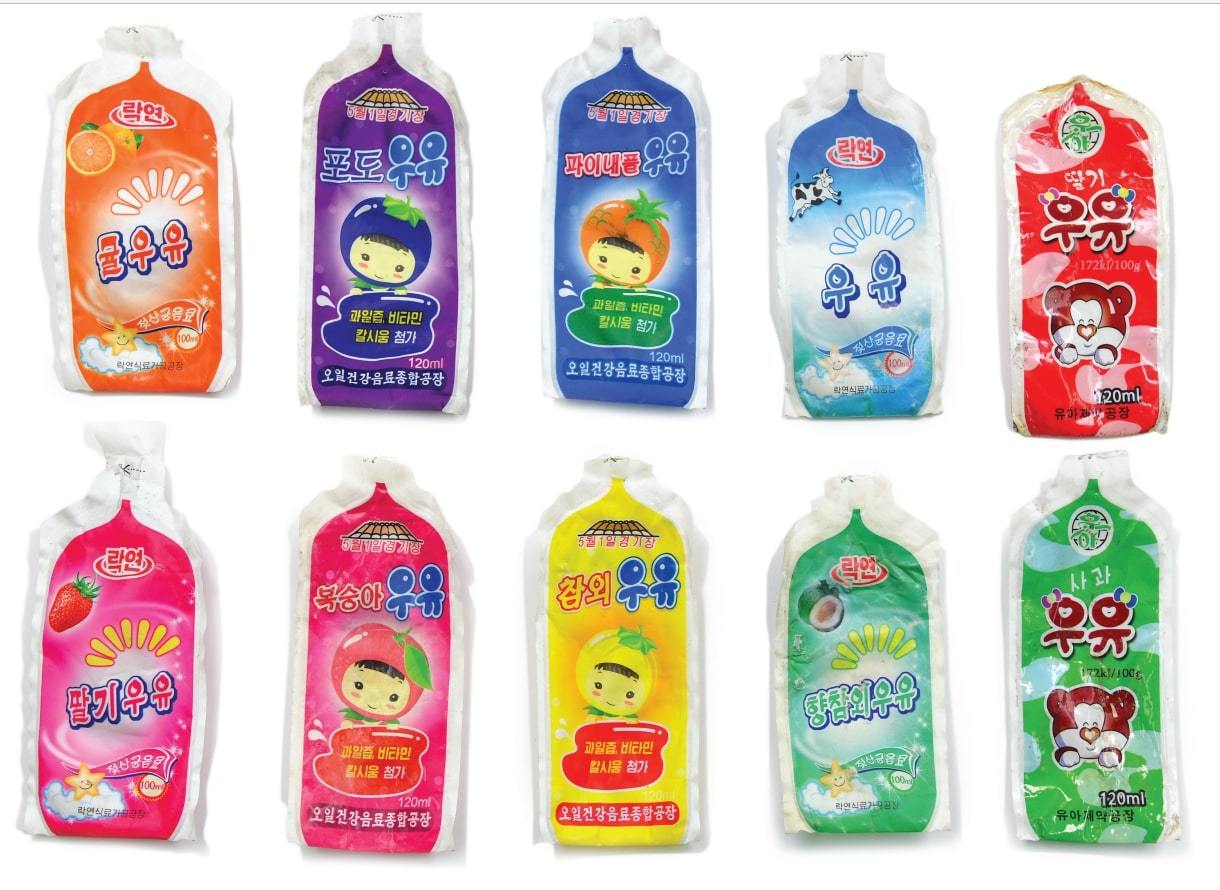 Milk packaging plastic bags with different flavors such as apple, oriental melon, pineapple, peach strawberry and tangerine were found on the Five West Sea near the disputed inter-Korean western maritime border. (Photo Credit: Kang Dong-wan)
Growing marketization
Kang said the key implication of the collected trash is to show the expansion of Jangmadang or unofficial markets and marketization in North Korea’s centrally planned economy, as well as the distribution of products through unofficial channels.

For example he found packages of everyday products manufactured in Pyongyang and Haeju, South Hwanghae Province, were found in the East Sea.

“The pieces of trash show that products are being actually distributed with the country (through unofficial channels), and traded at Jangmadang. Against that backdrop, we can understand that North Korean people’s individual preference has naturally affected the manufacture of products,” Kang said.

“If North Korea unilaterally produces and distributes goods (solely through official channels such as the public distribution system), there would be no need to develop industrial design and quality. But various flavors, product variety, and diversified packaging designs indicate that product production now reflects personal taste.”

A number of North Korean products copy the design of South Korean instant noodles and confectionery, and images reminiscent of Japan’s Hello Kitty are printed on daily necessities. The trend of imitating foreign goods suggests that consumer preferences have become the key consideration to determine what is produced in North Korea.

Amid growing markets and private economic activities, North Korean producers have no option but to seek manufacturing products that can gain popularity among consumers.

Focus on light industry
The trash Kang finds includes bottles for alcoholic and other beverages, fruit juice and milk cartons, and wrappers for bread, condiments, confectionery and instant noodles, as well as containers for laundry detergents and toothpaste.

“I used the expression ‘Pyongyang Market on the west coast’ on (the cover) of my book,’” Kang said, referring to his book “Picking up North Korean Trash on the Five West Sea Islands” published last November. “I have collected packages of all the items that we can generally purchase at a supermarket.”

Kang, for instance, has found around 35 ice cream wrappers with different flavors and additives such as collagen.

Kim also underscored that the major tasks of the new five-year economic plan aim to focus on “ensuring a smooth supply of commodities and materials in the light industry to increase the production of consumer goods” at the 8th Party Congress in January 2021. The North Korean leader also pointed out that light industry “plays an absolutely key role in providing the people with prosperous and civilized life.”

Kang also explained that he picked up milk packages the most on the beaches, and this trend stems from Pyongyang’s focus on child care policy. Kim ordered the establishment of the Party’s policy to supply nutritious food including daily products to children across the country at the party plenum in June 2021.

At the same time, the North Korean trash shows the limitations of the country’s self-sufficient approach.

The typical example is to use stevia as a sugar substitute due to Pyongyang’s constrained ability to import sugar cane and manufacture edible sugar.

“North Korea’s refusal to be incorporated into the global economy and emphasis on the self-sustaining economy has made the country more and more isolated and pushed it to produce substitutes,” Kang said, pointing out that North Korea’s isolation policy has created the vicious circle. 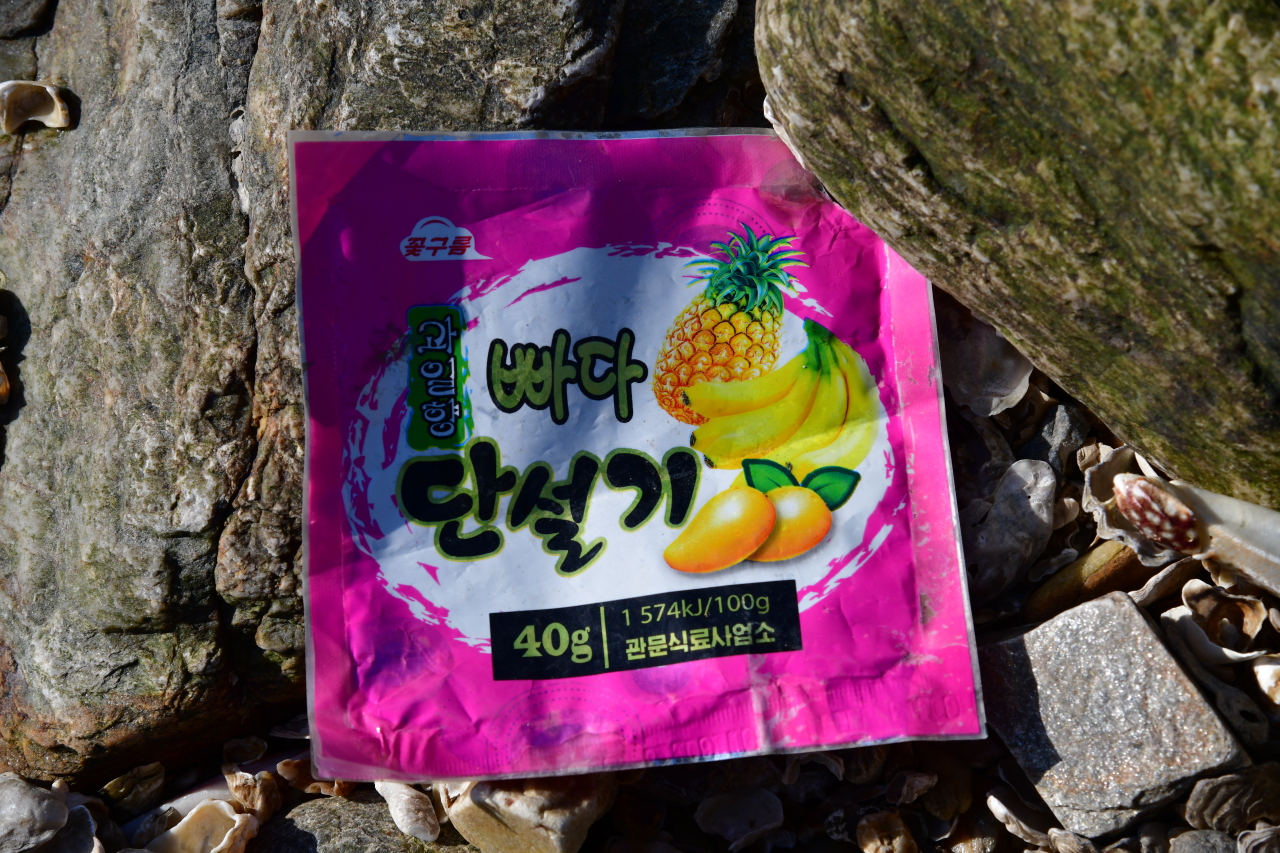 A wrapper of a fruit-flavored butter castella (Photo Credit: Kang Dong-wan)
Preparing for unification
Kang emphasized that his trash collection was of significance in garnering objective, truthful and undistorted information and contributes to preparing for the unification on the Korean Peninsula.

“South and North Korea should understand each other while preparing for unification. But distorted information about North Korea is rampant in South Korean society.”

The incumbent and former South Korean governments have “exaggerated or played down” the reality of North Korea and the people’s lives depending on their political tendencies, Kang said, citing it as one of the reasons for the spread of misinformation.

South Korean people, for instance, are not well-aware of the language differences between the two Koreas. They often misunderstand that North Korea still calls ice cream “eoreum bosungi,” but washed-up ice cream wrappers show that the country now uses the word “ice cream” or “Eskimo.”
The two Koreas had pushed forward the project of compiling a joint dictionary in earnest from 2005 to 2015 to recover linguistic homogeneity, but inter-Korean meetings between linguists were suspended due to strained relations.

“My work can contribute to narrowing linguistic and cultural gaps, and by extension, the trash collection is rather empirical research which seeks truth grounded on concrete evidence,” Kang said. “From a cultural aspect, enhancing understanding on development in North Korea’s industrial design has great significance in the process of (culturally) integrating the two Koreas.”

The professor will carry on his field research on the beaches in South Korea at his own expense as part of his efforts to “collect and analyze anything and everything related to North Korea.”

“Every time I go to the beach, I constantly discover new wrappers and packages. Therefore, I will continue to collect pieces of trash as they are very crucial data for tracking product changes over time and understanding the North Korean people’s living conditions.”

But Kang underlined that his research does not intend to shed light on the improvement in living standards or industrial development in North Korea.

Rather, Kang seeks to delineate the reality that the authoritarian Kim Jong-un regime sees the need to live up to the expectations of North Korean people whose influence has grown.