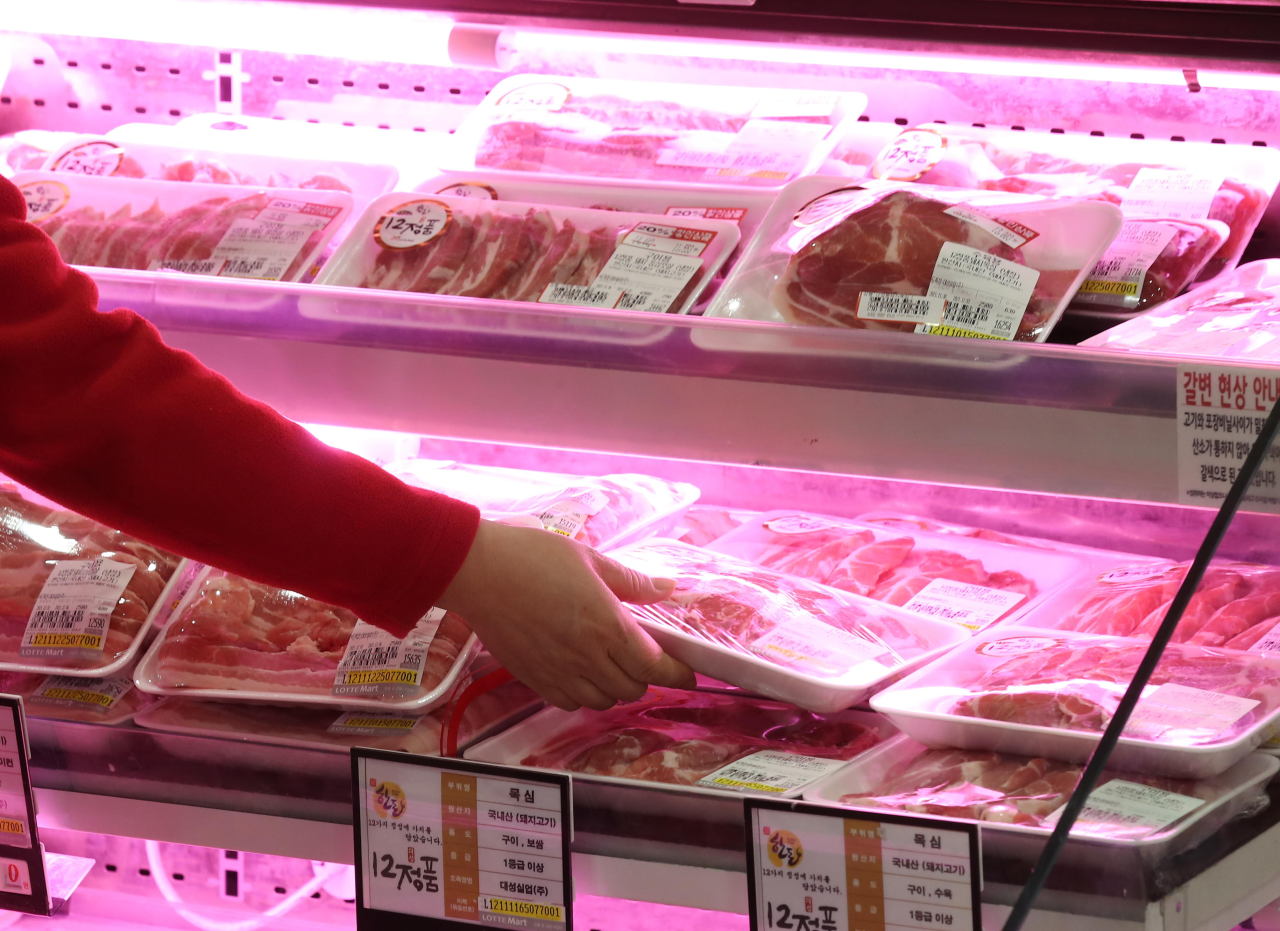 A consumer picks up one of the pork products, displayed at a large discount chain in Seoul, Thursday. (Yonhap)
SEJONG -- The growth in consumer prices posted the highest in almost a decade last month with prices of daily necessities such as diesel and agricultural products surging, sparking concerns over its impact on households.

Statistics Korea said Thursday that consumer prices climbed 3.7 percent on-year in November, which marked the highest increase since the 4.2 percent growth in December 2011.

Consumer prices increased over 3 percent for the second consecutive month, following a 3.2 percent growth in October. This could weigh on the household sector, which had already been saddled with record-high outstanding debt involving mortgages.

Gasoline and diesel prices surged by 33.4 percent and 39.7 percent, respectively, compared to November 2020. Though the government has taken countermeasures like slashing taxes on oil products, external factors such as fluctuation in international crude prices are likely to be continuous risks surrounding the inflationary pressures.

Prices of eggs and imported beef climbed by 32.7 percent and 24.6 percent, respectively, while cucumbers and lettuce each posted a growth of 99 percent and 72 percent.

Overall, a 7.6 percent increase was seen in agricultural products and 15 percent in livestock products over the past year. This has also elevated the prices for dining out at restaurants.

By region, Jeju Province topped the list as its consumer prices rose 4.5 percent on-year, followed by South Jeolla Province with 4.4 percent, Gwangju and Gangwon Province both with 4.3 percent each.

While Gyeonggi Province posted 3.9 percent, Seoul (2.9 percent) and Busan (3.6 percent) posted the lowest and second-lowest among the 17 major cities and provinces.

Deputy prime minister and Finance Minister Hong Nam-ki also sounded caution over the surging prices, saying that the government would take all feasible policies to tame the consumer prices throughout December.

Nonetheless, Hong stressed that the inflation growth in South Korea is not high compared to major countries, when it comes to a yearly comparison.

He cited the cumulative growth in consumer prices for the first 10 months of the year, which stood at 2.2 percent, an estimated 2.3 percent by the Bank of Korea and 2.4 percent of the Organization for Economic Cooperation and Development.

The Ministry of Economy and Finance, in a related analysis, said the US saw consumer prices shoot up 6.2 percent in October, which was the highest in more than 30 years. It also said the OECD average reached 5.2 percent in the corresponding month.

Among the nations which have publicized the figure for November, a 5.6 percent increase was seen in Spain and 5.2 percent in Germany. The inflation growth was 4.9 percent in the eurozone countries.