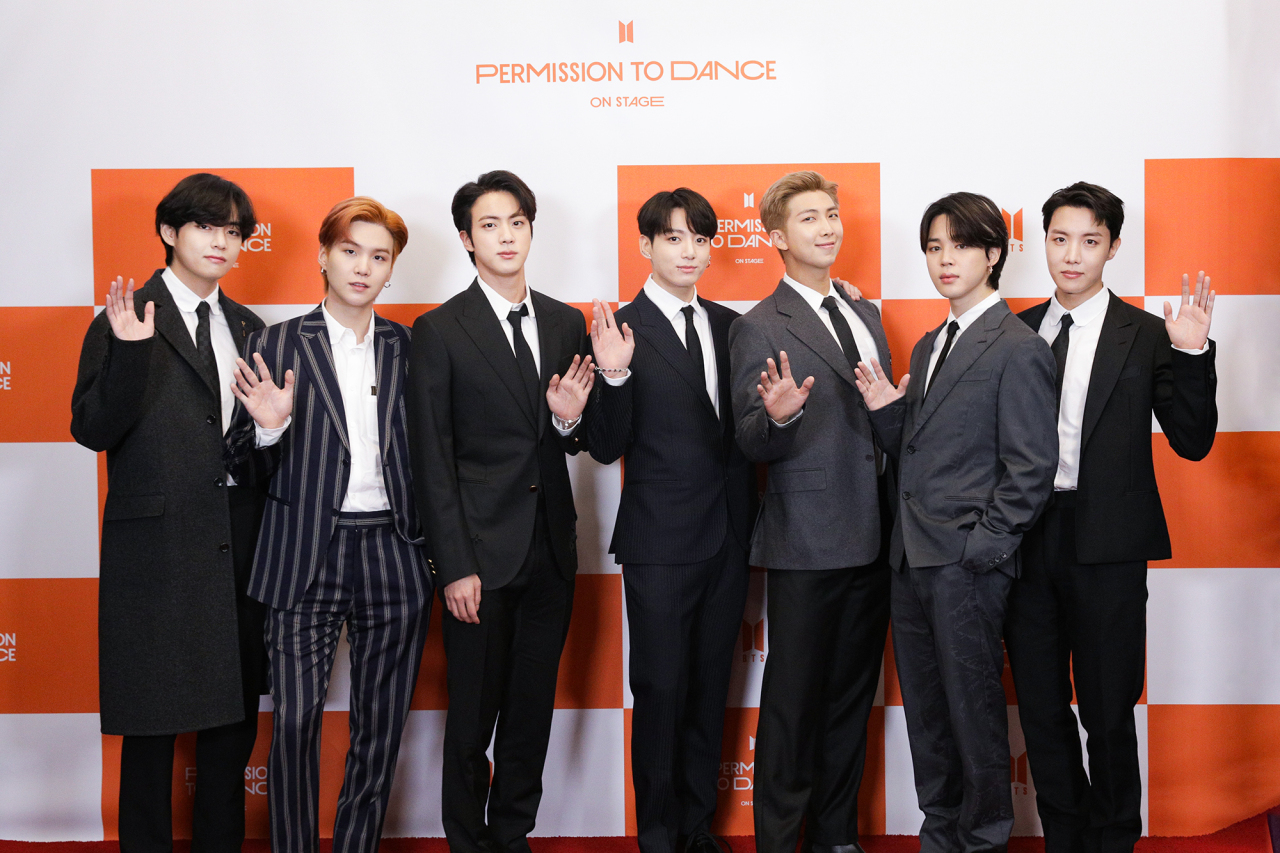 Members of K-pop sensation BTS pose for photos during a press conference for the “Permission to Dance on Stage” concert series at SoFi Stadium in Los Angeles on Sunday. (Big Hit Music)
Three members of K-pop sensation BTS have sold shares in their management agency Hybe, realizing profits worth around 10 billion won ($8.49 million) in the last two months, according to the company’s announcement on DART, the Financial Supervisory Service’s electronic disclosure board, Thursday.

Jin, J-Hope and RM dumped a total of 9.95 billion won-worth of stocks during regular trading sessions, which were gifted from the agency ahead of its market debut on South Korea’s main board Kospi market in October last year.

Hybe founder and Chairman Bang Si-hyuk evenly distributed 478,695 common shares of the agency to the seven members a month before the company went public.

The gift was a token of the long-term partnership between the company and the artists, according to Hybe. By owning 68,385 common shares each, the members’ individual gifted stocks were valued at nearly 9.2 billion won at the time.

The agency’s stock had been trapped between the 200,000 won and 300,000 won-mark in the latter half of this year but the shares started showing an upward trend from mid-October, spurred by the news that the boy group’s offline concerts would resume. The firm refreshed its 52-week high of 421,500 won during intraday trading on Nov. 17.

Shares of Hybe closed at 330,000 won Thursday, down 6.38 percent or 22,500 won, from the previous session’s close. Based on the stock’s closing price, the value of stock held by the group’s members Suga, Jimin, V and Jungkook stood at 22.6 billion won each. The valuation of J-Hope and RM’s stocks worth 20.7 billion won and 19.1 billion won, while Jin’s stock value came to 17.3 billion won.

Meanwhile, BTS will not be able to attend the 2021 Mnet Asian Music Awards scheduled for Dec. 11 in Paju, Gyeonggi Province, due to the latest change in the Korean government’s quarantine rules, implemented to curb the spread of the omicron variant of COVID-19. Instead, the group will appear in a brief video message for its fans, according to an official of Mnet, the cable channel that hosts the annual event.

The septet is required to undergo a 10-day mandatory self-quarantine upon returning from Los Angeles where it held its first in-person concerts, “Permission to Dance on Stage,” in two years.