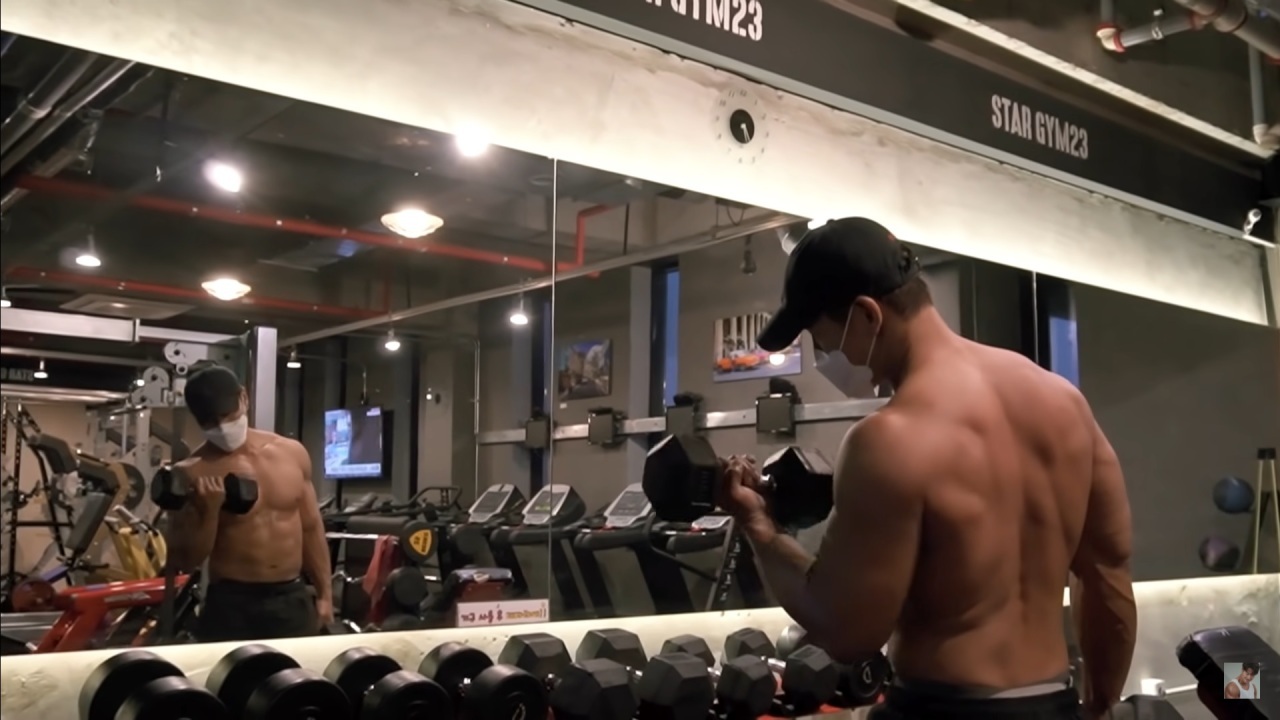 Controversy broke out one faithful Halloween to spook fans of the beloved TV personality, when a fitness YouTuber named Greg Doucette called him out for likely not being “natural” when working out to build his body.

“Is he natural? Of course not!” Doucette said in his video. He added that he thought it was not likely that Kim was using performance-enhancing drugs like anabolic steroids, but rather hormone replacement therapy like Doucette himself. HRT has been found to be effective at reversing the aging effects on muscles.

Doucette, a bodybuilder and powerlifter, appears to know what he is talking about when it comes to workouts with PEDs. In 2014, it was reported that Doucette was fined by the Canada Border Services Agency $50,000 for smuggling and distributing anabolic steroids, and that a 2010 search of his Halifax home found $250,000 worth of steroids and steroid distribution materials, along with 56 envelopes containing raw testosterone powder.

The Canadian bodybuilder admitted on Instagram in 2020 to using steroids in the past and said he was on HRT, both then and now. And now, he is accusing Kim, one year his junior, of doing the same as he is doing to compensate for his aging body -- that he is not “natural.”

In bodybuilding, being “natural” generally refers to not having been enhanced by any means other than working out, eating right, getting sufficient rest and protein supplements. A lot of the times it refers to not adding male hormones via artificial means. Obviously, this rules out PEDs and HRT, although the implications of using the two methods are not the same among bodybuilders.

The focal point of the dispute is simple: Is it feasible for a 45-year-old man to have a body like Kim’s without taking a shortcut?

There can hardly be any dispute that Kim has a phenomenal body. In 2018, Kim -- one of the main cast members of SBS’ “My Little Old Boy” -- took an InBody scan as part of a routine health checkup. He stood 177.4 centimeters tall, weighed 81 kilograms and his body fat was 8.5 percent.

To put that into perspective, the American Council on Exercise says athletes are normally in the 6-13 percent range, fit people are 14-17 percent and 18-24 percent is considered acceptable. It was reported in 2018 that then 33-year-old Cristiano Ronaldo, one of the biggest soccer superstars in the world, had 7 percent body fat.

Kim’s skeletal muscle mass was measured to be 42.8 kilograms. In short, Kim has an athlete-level body by any standards.

The controversy stems from Doucette’s argument that it is “highly doubtful” Kim is a natural athlete, based on the fact that the body does not keep growing with age and that male hormones decrease over time.

Nobody beats Father Time, but for how long can he be hoodwinked?

Deterioration of body over time

There have been amazing individuals in sports world who seemingly defy the test of time. Tom Brady, arguably the greatest quarterback of all time, was Super Bowl MVP in 2020, six months before he turned 43. Karl Malone, who had become the oldest NBA MVP ever at almost 36, was reported in 2013 to still be retaining his playing weight by working out three hours a day at the age of 50.

Brady and Malone have never been officially accused of PED use -- save a few blind allegations that they could not possibly be that fit at that age -- but even so, one could say they are the exception, not the rule.

Professor Yoon Joon-shik of the rehabilitation department at Korea University explained that among the deteriorating effects that accompanies aging is sarcopenia, defined by the loss of muscle mass and strength with aging. Korean Longitudinal Study on Health and Aging found sarcopenia to be prevalent among 16.7 percent of the male population above 65 in Korea, and 5.7 percent of the same female population.

“It usually manifests after 40, and becomes one of the biggest (health) issues around 50 or 60. It’s not just the loss of muscles, but also the accompanying changes in hormones and give effects on related organs,” Yoon explained, adding that working out is the most common advice he would give patients.

But he stressed that age alone would not be enough in determining a person’s physical condition as the age when one’s body breaks down differs for everyone. “Sarcopenia is likely to manifest later in a body of a person who has taken great care of his or her body. It would help to test one’s strength, cardiopulmonary function and to be aware of the hormonal level changes within one’s body.”

Hormone levels are another issue. The general clinical opinion is that testosterone, the primary sex hormone in males, usually start declining around age 30 at rate of 1 percent per year.

But Kim has a famously high testosterone level. In the aforementioned SBS show, it was revealed that Kim’s total testosterone was 9.24 nanograms per milliliter, which was considered very high for a man his age -- 42 at the time -- since the average figure for a man was 2.7-10.7 ng per mL, according to Severance Hospital in Seoul.

In a video Kim uploaded to his YouTube channel Friday, a blood test at a local hospital found Kim’s total testosterone levels to be 8.38, a lower figure than three years ago, but still very high for his age.

While it is clear Kim’s body is flowing with male hormones, the dispute is over where they came from. One of the most notable smoking guns in doping tests is actually low -- not high -- testosterone levels.

He tested positive for Turinabol, an anabolic steroid in an early drug test, although he stated that he did not knowingly take any prohibited substances. He received a 15-month suspension.

Not judging the validity of Jones’ case, the extended use of anabolic steroids and other PEDs can have long-term deteriorating effects on testosterone levels. In layman’s terms, injecting steroids will pump up your testosterone in the short term, but your body will get lazy and stop producing them over time.

In a Q&A session with a local newspaper, endocrinologist Jung Yoon-seok of Ajou University said that consistent exposure to large quantities of steroids can suppress hormone production inside the body. He was further quoted as saying that abusing such substances can affect the body’s capacity to maintain homeostasis -- the state of the internal, physical and chemical condition -- which can be very difficult to repair.

But Kim’s high testosterone levels are exactly the opposite of this case, although his accusers claim this is also “unnatural” because of his age.

Doucette has said from the beginning that Kim looks “100 percent natural,” but that is unlikely because “nobody can grow forever.” Kim has claimed that his weight has not varied beyond 1 or 2 kilograms for the last 15 years, showing he hasn’t “grown forever.”

Urologist and YouTuber Lee Yeong-jin, who runs a clinic in Daegu, posted on his channel a video saying that a man in his 40s with a testosterone level of 9.24 is perfectly feasible. “If one’s hormone (testosterone) levels were to increase because of drugs, the figure would be ridiculously high or low, not within normal range like Kim,” he said in his video.

There is no substantial evidence as of now that ties Kim to ever using HRT or steroids, but it would still be a tall order convincing everyone he is “natural.” This is from the simple fact that it is nearly impossible to prove a lifetime of PED non-use, despite how thorough the testing is.

This contrasts from the aforementioned Jones, who tested at 2.1 micrograms per deciliter, significantly lower than the male average.

But even this would not be definitive proof, as it is possible to also inject DHEAS for medical purposes.

Kim has expressed his willingness to “take every drug test available” and said he is currently taking necessary steps to do so. And while a great many people believe in what they perceive to be his earnest attitude toward working out, it is highly likely there will always be doubters regardless of the medical proof. No test covers a lifetime, at least not with today’s technology.

Kim himself said it best, “People are going to believe what they want to believe anyway.” The controversy, after all, started without any presentation of scientific proof.