[ The Korea Herald – Send E-mail ]
[KH Biz Forum] New business opportunity in metaverse imminent: SKT VP
Executive behind SKT’s “ifland” platform touts metaverse as place where all can happen
By Kim Da-sol
Published : Oct 26, 2021 - 16:22
Updated : Oct 26, 2021 - 18:28
The contactless trend in the COVID-19 era and development of digital technologies have accelerated the advent of the metaverse, opening up a new market with limitless business opportunities.

People will spend more time in three-dimensional virtual spaces than they do on the two-dimensional internet, said Jeon Jin-soo, vice president of SK Telecom who is leading the firm’s venture into the metaverse world. 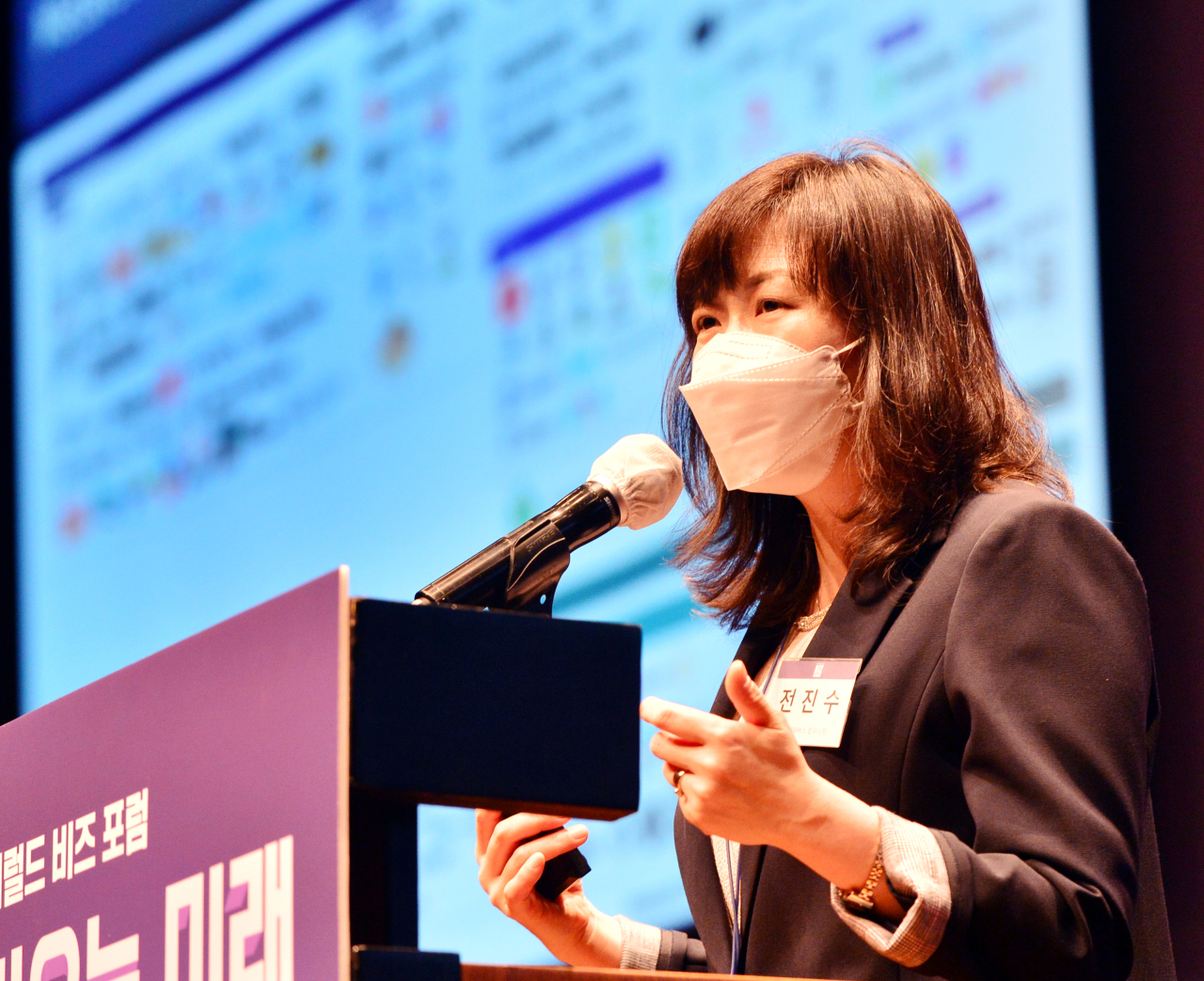 SK Telecom Vice President Jeon Jin-soo speaks during The Korea Herald’s annual business forum at the Shilla Seoul on Tuesday. (Park Hyun-koo/The Korea Herald)
“Metaverse is the next internet platform. All 2D information will turn 3D, such as changing the way we used to shop goods online by looking at photos or videos, to a new way that allows people to visit to the virtual store space, touch (virtual) products and make payments there,” said Jeon during her lecture at Korea Herald Biz Forum at the Shilla Seoul on Tuesday.


Metaverse first appeared in Neal Stephenson’s 1992 science fiction novel “Snow Crash,” where humans, as avatars, interact with each other in a three-dimensional virtual space replicating the real world.

Recently, the term metaverse has expanded to mean a digital reality platform which comprises aspects of social media, online game, augmented reality, virtual reality and even cryptocurrency, so that users can interact virtually.

In 2013, SKT jumped into the metaverse and 3D development business to develop AR, VR and avatar technologies. In July, Jump Studio, an in-house enterprise of SKT that specializes in volumetric video capture tech, launched a metaverse platform called ifland.

Three months since its launch, events like a university student entrance ceremony and a fan meeting involving celebrities have been held on ifland. An audition for roles for a web drama produced by SKT have also taken place there.

“Metaverse users create their own avatars, so-called secondary characters, and decide to apply or not apply their realistic appearances. In metaverse, avatars don’t necessarily have to be human -- they can be animated characters, animals or even digital humans, such as Rozy,” Jeon said.

Rozy, the country’s first virtual influencer created by Sidus Studio X, has garnered attention recently after appearing in a TV commercial. Some 103,000 Instagram users follow her on the platform and thousands “like” her posts about her everyday life as a 22-year-old woman interested in fashion and travel.

Jeon highlighted that due to restraints on meeting in person amid the pandemic, the metaverse not only works as a place to meet virtually but a platform that allows experiences that have been less feasible in the pandemic era.

“Places like the Louvre Museum can be created in metaverse by using high resolution photos taken by camera or with lidar technology. This allows users to go on overseas travels even during pandemic,” said Jeon.

She also stressed new business opportunities in the metaverse, as it can create transactions through commerce or sales of B2B2C contents on the platform.

“It is predicted that users will eventually participate in commerce activities in the metaverse through blockchain technologies such as NFT,” she added.

As global tech companies such as Facebook and Epic Games heavily invest in AR as the next digital paradigm following the invention of smartphones, the growth of metaverse has gained even more traction with rapid increase in user engagement.

“Only about a month has passed since ‘Squid Game’ premiered on Netflix, but metaverse users have already created a space to play a game that appeared in the show, dressing up their avatars like characters in the drama,” said Jeon.

Data from market research firm Statista showed that the global metaverse market will grow to be worth $269 billion by 2024, from the current $30.7 billion.

“That’s why I suggest you to actively participate in metaverse platform and get more engaged,” said Jeon.