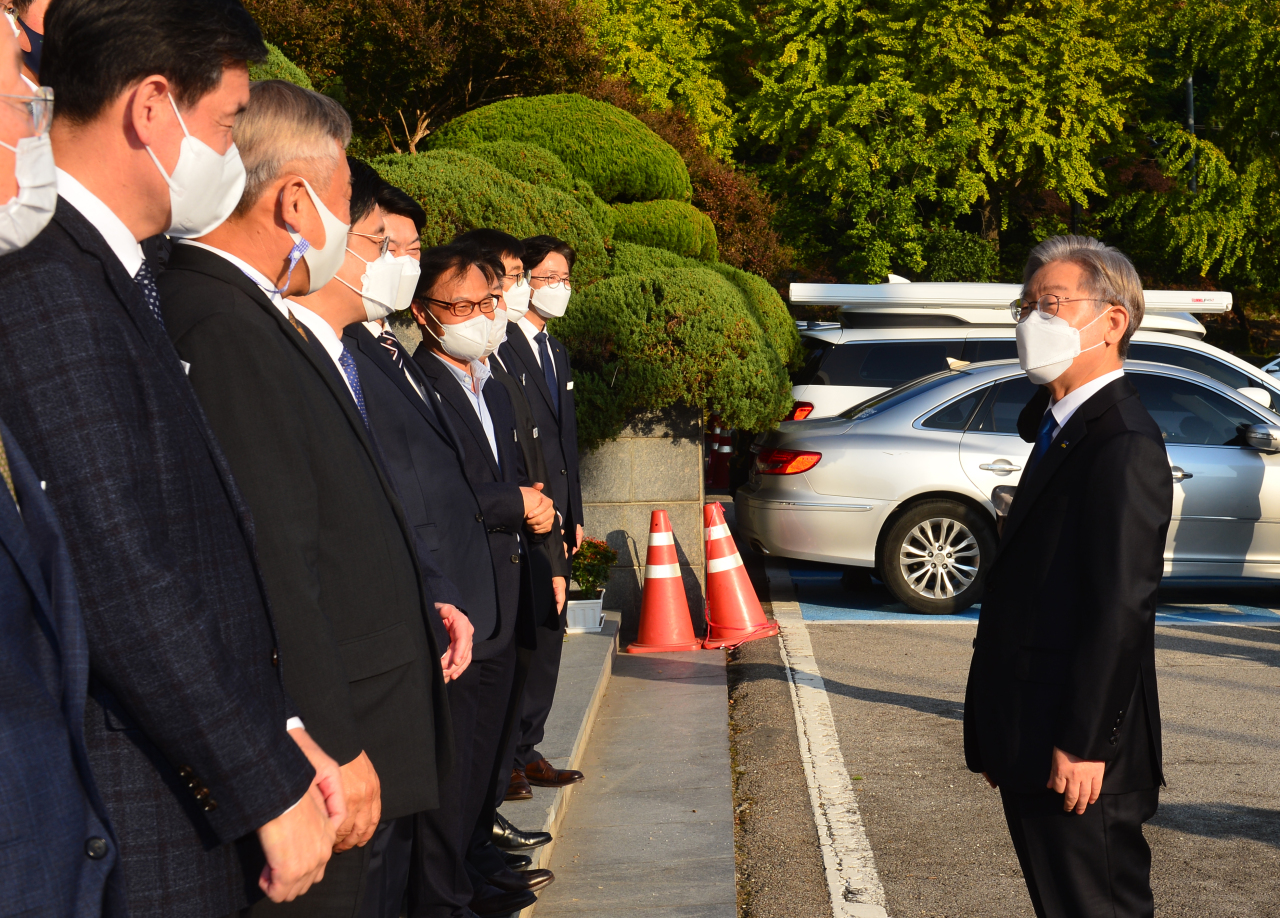 Lee Jae-myung, presidential candidate representing the ruling Democratic Party, exchanges remarks with officials of Gyeonggi provincial government after announcing his resignation from the gubernatorial post Monday. (Joint Press Corps)
Lee Jae-myung has left the Gyeonggi provincial government to focus on his campaign as the ruling Democratic Party’s presidential nominee, but his controversial policies are to continue, at least until July.

It is the second time the Gyeonggi provincial government has had temporary leadership. Lee In-je resigned from the gubernatorial post in 1997 to pursue an unsuccessful bid for the presidency.

But the vice governor’s task is mostly to continue what Lee Jae-myung started, not start anything new -- which could be a problem for those who have accused Lee of being a populist and even compared him to US Sen. Bernie Sanders.

Gyeonggi provincial government officials said they expect to continue the major initiatives begun under Lee’s leadership, with most centering on increasing welfare for Gyeonggi Province residents and relocating key provincial agencies to the northern and eastern parts of the province.

While in office, Lee emphasized the need to provide a basic income for residents and the necessities of life for low-income households. He was reviewing policies to raise wages for irregular workers, as opposed to full-time, permanent ones, while improving rest areas for on-site laborers.

Lee gained solid support from Gyeonggi Province residents and others for his liberal policies, and his universal basic income proposal won more support over the past year as more and more households experienced financial difficulties due to the pandemic.

Critics denounced Lee’s proposal as radical and unrealistic, and the naysayers even included some of his fellow ruling party members until he was declared the winner of the party’s presidential primaries.

His focus on welfare and lowering financial burdens for the common people continued even until his last day as governor on Monday.

On that last day, Lee signed an administrative order abolishing the 1,200-won ($1.03) toll for the Ilsan Bridge effective Wednesday at noon. His government had already revoked the National Pension Service’s right to operate the bridge.

The National Pension Service is planning legal action to fight the order, which it perceives as unjust because it deprives an investor the right to claim returns after building the bridge. Lee’s decision could be overturned, depending on later court rulings.

The bridge, connecting the cities of Goyang and Gimpo, Gyeonggi Province, opened in May 2008 after 178.4 billion won was invested to build it. The bridge is at the moment the only toll bridge of the 28 that cross the Han River.

But Oh may have much work on his hands if he is to carry out his mandate before July, given that Lee was distracted with frequent court visits and the presidential campaign, all of which took time away from his administrative duties.

While serving as governor, Lee stood trial on charges of spreading false information and violating election laws during a TV debate in the run-up to the 2018 gubernatorial election. He was ultimately cleared of all charges in July 2020.

Lee also spent time in recent months running his own presidential election campaign -- visiting voters in other parts of the country, preparing campaign promises and debating other presidential contenders.

He has also had to respond to allegations of involvement in a growing land development scandal, preparing rebuttals and fighting accusations of having mismanaged the project and engaged in illegal favoritism while serving as mayor of Seongnam before taking the gubernatorial post.

Lee was elected to the governorship in June 2018 and had eight months left until the end of his term. As a presidential candidate, he was required by law to give up the post at least 90 days prior to the election, slated for March 9.