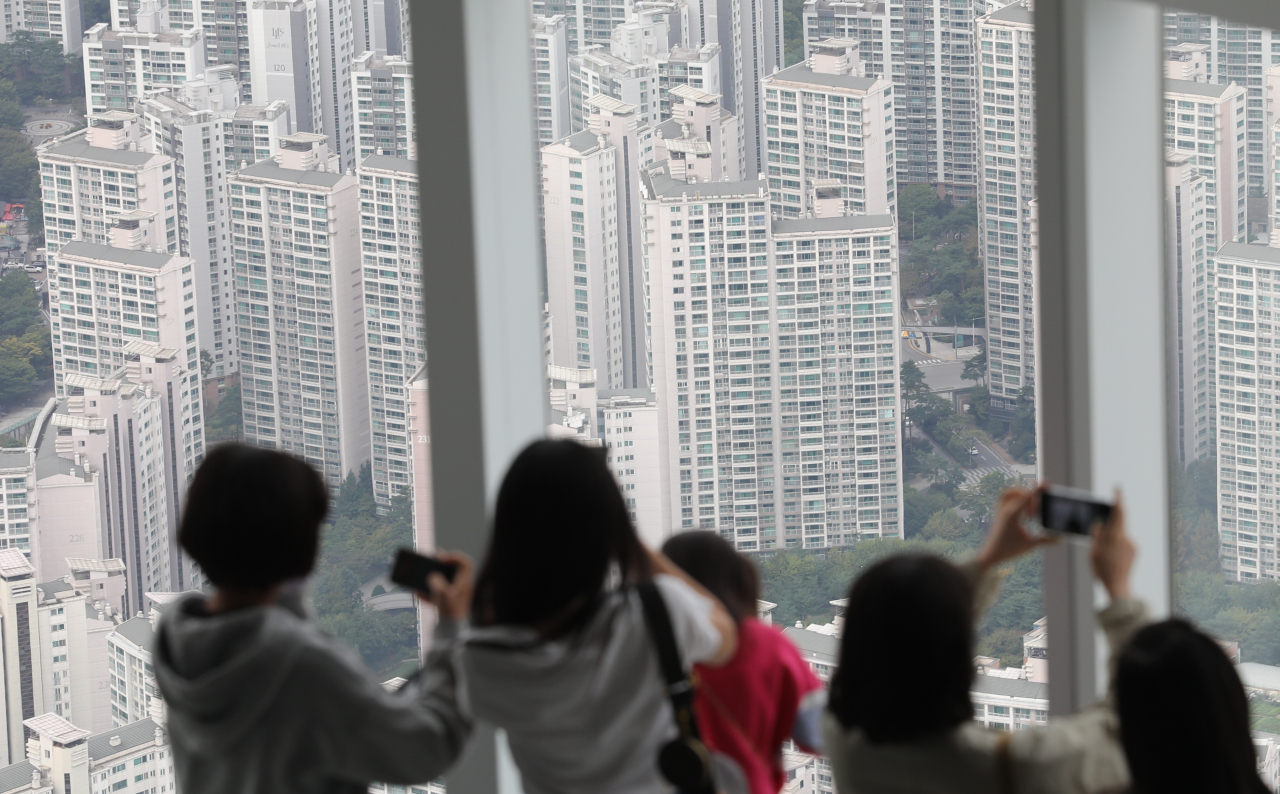 A view shows an apartment complex in Jamsil-dong, Seoul on Oct. 11. (Yonhap)
SEJONG -- Land owned by foreigners in South Korea has reached an all-time high in terms of combined size, amid their active purchases of apartments or sites for business, such as manufacturing and leisure facilities, government data showed.

According to the Ministry of Land, Infrastructure and Transport, foreigners owned 253.3 million square meters of land as of December 2020, which is the latest figure available. Though this accounts for less than 0.3 percent of the nation’s entire territory, the growth pace over the past decade is drawing wide attention.

The 2020 figure indicates an 8.1 percent increase under the incumbent administration, given the figure stood at 234.1 million square meters as of June 2017. The Moon Jae-in government took office in May 2017.

Foreigners had already been active buyers during previous administrations. Their land-owning in terms of size grew 32.9 percent in less than a decade, from 190.5 million square meters of land at the end of 2011. 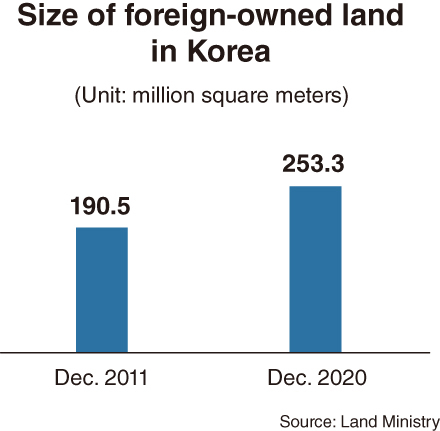 Nationals of other countries in the Americas, such as Canada, Mexico and Brazil, collectively owned 9.5 percent of the total, or 24.2 million square meters.

Real estate investors from China held 7.8 percent of all foreign-owned land, or 19.9 million square meters. According to a variety of real estate agency sources, Chinese nationals have been aggressive buyers of apartments in Seoul, Gyeonggi Province and Incheon, having shifted their focus to the capital area from Jeju Island in the early and mid-2010s.

Chinese investors aggressively purchased properties on the nation’s largest island, Jeju, since 2010. Unlike Koreans, they are not subject to the country’s tough mortgage regulations by using Chinese banks to raise funds.

Investors from other regions of the globe collectively owned 29.1 square meters, or 11.4 percent of the total.

Data from the National Tax Service, which was requested by a ruling party lawmaker, showed that Chinese purchased local apartments -- the combined real estate value of which marked 3.1 trillion won ($2.6 billion) -- between January 2017 and May 2020.

US nationals were next, as they bought apartments worth 2.1 trillion won over the corresponding period.

By trading case, Chinese nationals and US nationals bought 13,573 and 4,282 apartment units, respectively, during the period.

More and more Koreans are calling on the National Assembly to legislate laws restricting foreign ownership of local real estate, claiming it plays a part in inflating apartment prices.

They question whether the government has any means of imposing heavy property taxes on non-Koreans who own multiple homes, while Korean nationals are subject to tough taxation for owning multiple homes.

Their anxiety stems from the failure of the Moon administration’s real estate policies, despite repeated promises that those policies would curb housing prices.

Apartment prices in major regions -- including Seoul, Gyeonggi Province, Incheon, Sejong and Busan -- have shot up 100-150 percent over the past four or five years.