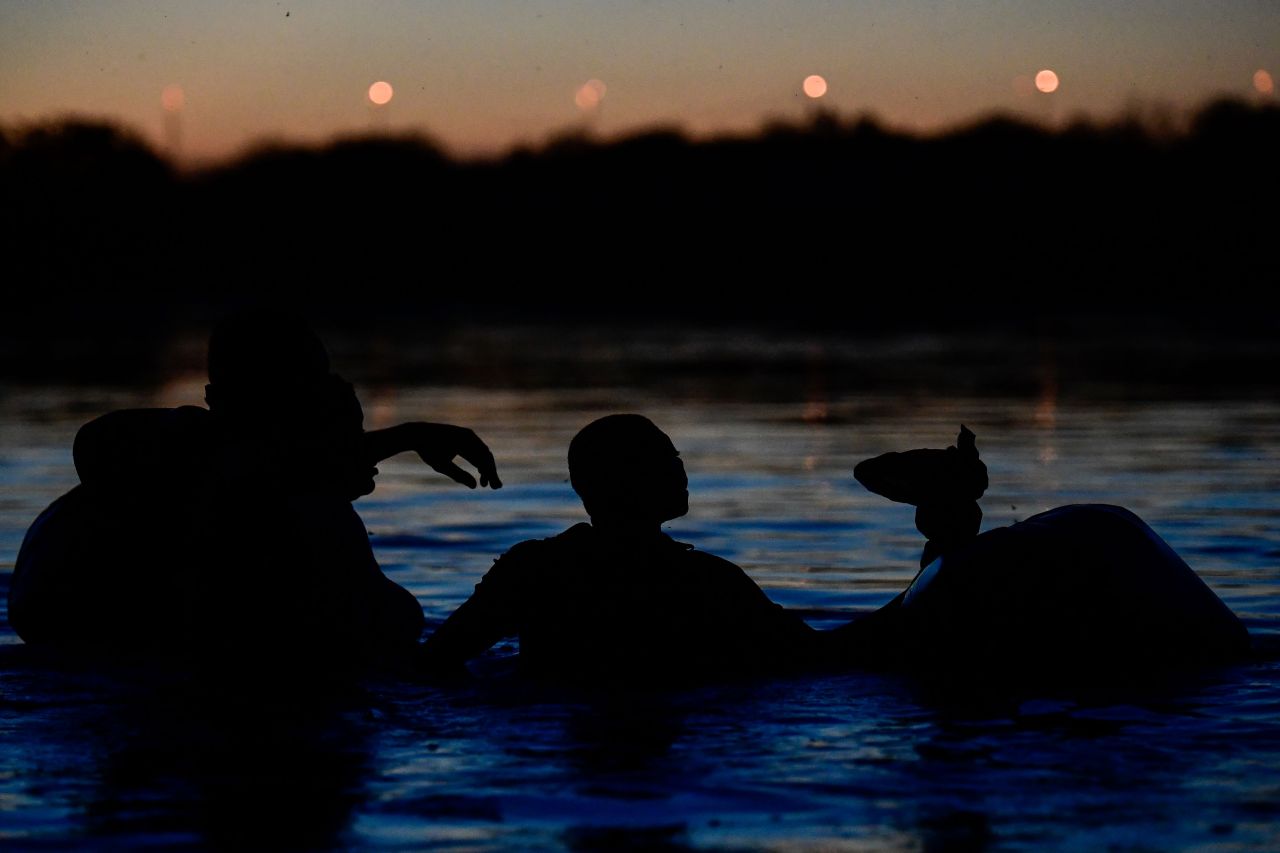 Haitian migrants cross the Rio Grande river, as seen from Ciudad Acuna, Coahuila state, Mexico on Sept. 23. (AFP-Yonhap)
The Biden administration's special envoy to Haiti resigned in protest of "inhumane" large-scale expulsions of Haitian migrants to their homeland as it is wracked by civil strife and natural disaster, US officials said Thursday.

Daniel Foote was appointed to the position only in July, following the assassination of Haiti's President Jovenel Moise. Even before the migrant expulsions from the small Texas border town of Del Rio, the career diplomat was known to be deeply frustrated with what he considered a lack of urgency in Washington and a glacial pace on efforts to improve conditions in Haiti.

Foote wrote Secretary of State Antony Blinken that he was stepping down immediately "with deep disappointment and apologies to those seeking crucial changes.''

"I will not be associated with the United States inhumane, counterproductive decision to deport thousands of Haitian refugees and illegal immigrants to Haiti, a country where American officials are confined to secure compounds because of the danger posed by armed gangs to daily life,'' he wrote. "Our policy approach to Haiti remains deeply flawed, and my policy recommendations have been ignored and dismissed, when not edited to project a narrative different from my own.''

The State Department criticized Foote for resigning at a critical juncture and pushed back against suggestions that his policy prescriptions were overlooked.

"This is a challenging moment that requires leadership,'' spokesman Ned Price said in a written statement. "It is unfortunate that, instead of participating in a solutions-oriented policy process, Special Envoy Foote has both resigned and mischaracterized the circumstances of his resignation.''

He added that the role of the president's advisers is to provide him with the best possible advice. "No ideas are ignored, but not all ideas are good ideas,'' Price said.

Foote's sudden departure leaves a void in US policy toward Haiti _ US Ambassador Michele Sison is expected to depart soon after being nominated to serve in another State Department post _ and adds another critical voice to the administration's response to Haitians camped on the Texas border.

Criticism has been fueled by images that went viral this week of Border Patrol agents on horseback using aggressive tactics against the migrants. Democrats and many pro-immigration groups say efforts to expel thousands of Haitians without giving them a chance to seek asylum violates American principles.

The migrant camp has shrunk considerably since surpassing more than 14,000 people on Saturday, with many of them expelled and many others released in the US with notices to report to immigration authorities.

The expulsion flights to Haiti began Sunday and there were 10 by the end of Tuesday, according to Haitian officials. US officials say they are ramping up to seven flights a day, which would make it one of the swiftest, large-scale expulsions from the US in decades.

At least one top official in Haiti cheered Foote's resignation while accusing the Biden administration of violating the rights of Haitian migrants.

"This is the first time we see a US diplomat who has decided to go against the will of the US government,'' Mathias Pierre, Haiti's election minister, told The Associated Press. "We salute that.''

Pierre also criticized Haiti's elite, saying they have turned a blind eye because migration fuels the economy. He noted that 35 percent of Haiti's gross domestic product is remittances, with the diaspora, much of it in the US, sending roughly $3.8 billion a year.

Haitian Prime Minister Ariel Henry has barely discussed the expulsions in public, saying only that his government is worried about conditions that migrants face on the US border and that it will help those sent back to Haiti. Pierre was far more critical of the US.

"While they're receiving (thousands) of Afghan people, they're rejecting Haitians while Haiti is in the middle of a crisis: a crisis with the earthquake, a crisis with the assassination of the president and a poverty crisis that is clearly one of the major issues why people are leaving,'' Pierre said.

Foote served previously in Haiti as deputy chief of mission and is a former ambassador to Zambia. In his new position, he worked with the US ambassador to support Haiti after the president's assassination.

For weeks, he had been quietly pushing in Washington a plan to boost US security assistance to Haiti to pave the way for new presidential elections. But Haiti watchers said he became increasingly disappointed with the pace of decision-making in the administration.

"When someone who is tasked with Haiti policy at the highest level resigns because 'recommendations are ignored and dismissed' it's not only troubling, but shows you this administration does not tolerate anyone who won't go along with their distorted view of the facts,'' said Damian Merlo, a Republican strategist who has worked for years on Haiti policy and is now a registered lobbyist for the country's government. "Dan Foote is a world class diplomat who refuses to be told what do. I wish more foreign service officers had his courage to stand up and call out their bosses.'' (AP)