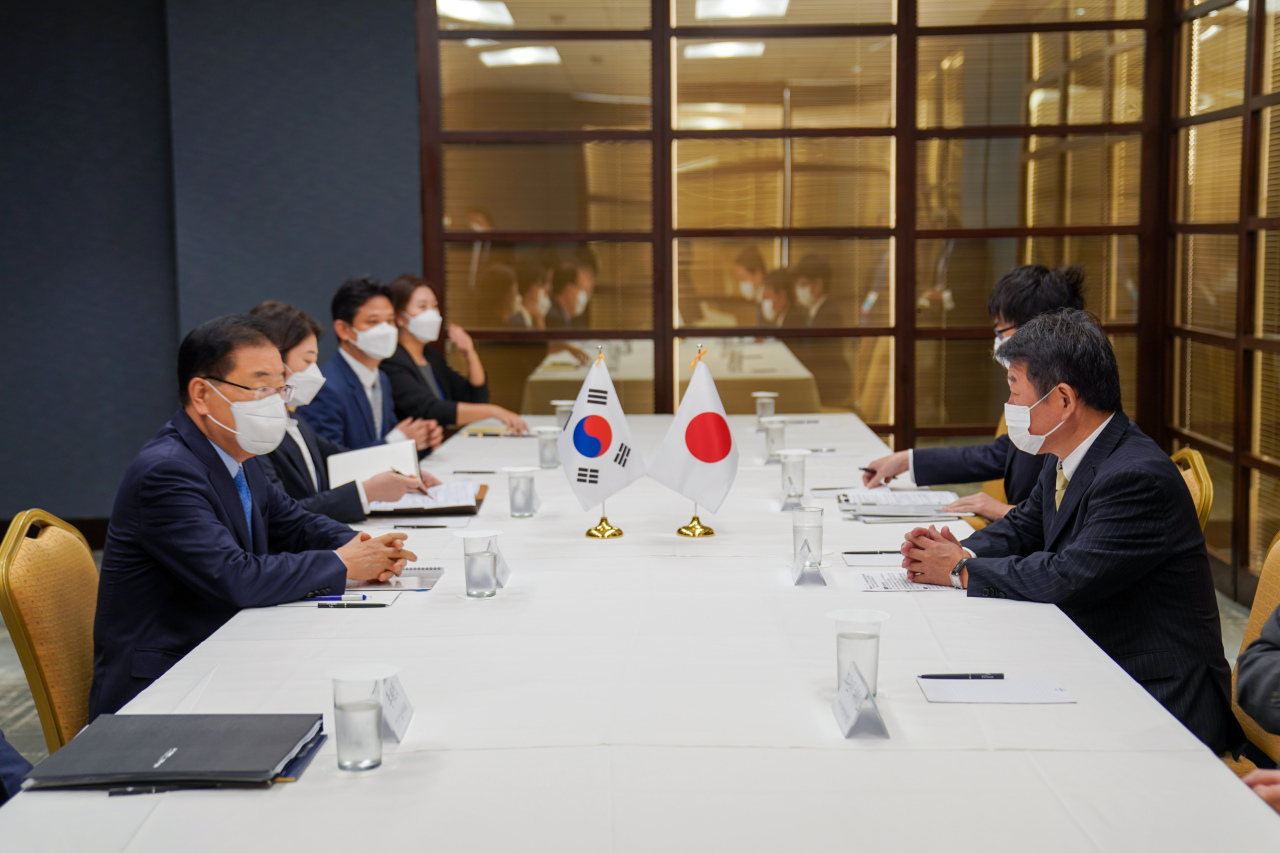 Foreign Minister Chung Eui-yong (left) holds talks with his Japanese counterpart, Toshimitsu Motegi, on the sidelines of the UN General Assembly in New York on Thursday. (Ministry of Foreign Affairs)
The top diplomats of South Korea and Japan met for talks on Thursday and restated differences on wartime history that have been at the center of a bilateral feud, but agreed to resolve the issue and improve their soured ties.

South Korean Foreign Minister Chung Eui-yong and his Japanese counterpart, Toshimitsu Motegi, held talks on the sidelines of the United Nations General Assembly in New York. Their meeting came as the neighbors are mired in a protracted row over problems stemming from Japan’s 1910-45 colonial rule of Korea, such as wartime forced labor and sex slavery issues, as well as Japan’s politically motivated export curbs.

During their meeting, Chung explained South Korea’s position on the historical issues and stressed the need to work together with Japan to find a solution. The minister called on Motegi to accelerate bilateral diplomatic consultation and reiterated that Tokyo’s export curbs should be retracted at an early date, according to the ministry.

Motegi, for his part, repeated Japan’s position on the matter.

Kyodo News reported that the two envoys failed to narrow the gaps over a host of bilateral points, including wartime compensation, but they shared views that it is necessary to normalize Seoul-Tokyo ties and cooperate in broad areas.

The two also discussed other thorny issues, including Tokyo’s recent decision to discharge radioactive wastewater from the stricken Fukushima nuclear plant into the sea, as well as a territorial dispute over Korea’s easternmost islets of Dokdo, which Japan calls Takeshima.

Meanwhile, the envoys reaffirmed cooperation between the two countries, as well as trilateral cooperation with the US in dealing with North Korea, following its recent launches of ballistic missiles and cruise missiles.

Chung stressed the inter-Korean cooperation, dialogue and engagement for the complete denuclearization and lasting peace on the Korean Peninsula. In turn, Motegi pledged to continue cooperation for substantive progress in the peace efforts, according to the ministry.

On the previous day, the two held a three-way talks involving US Secretary of State Antony Blinken, where they underscored cooperation in persuading the North to abandon its nuclear arsenals.

The last time Chung and Motegi met in-person was in May, on the sidelines of the Group of Seven meeting in London. Back then, the two also discussed various issues, but failed to narrow their differences on key historical matters.