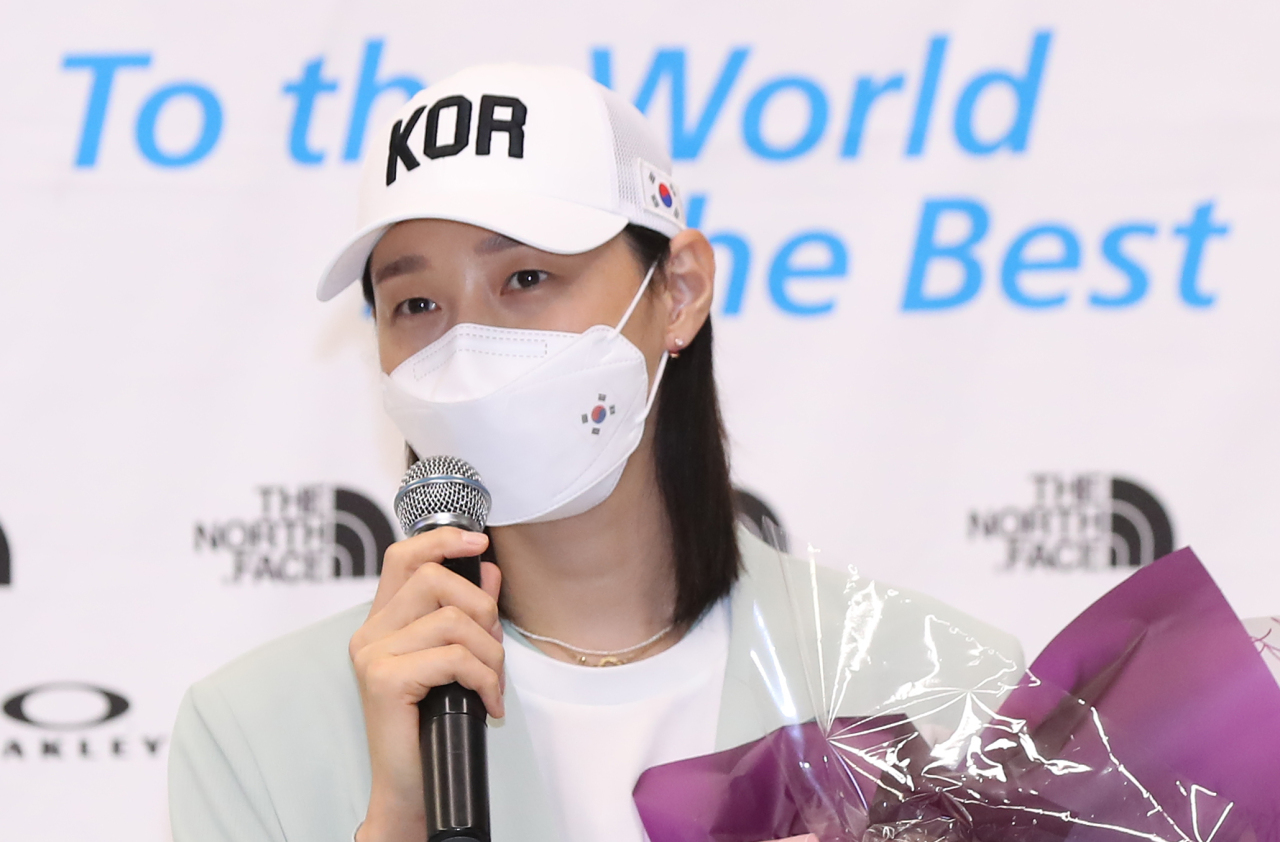 South Korean volleyball star Kim Yeon-koung speaks to reporters at Incheon International Airport, west of Seoul, on Monday, after returning home from the Tokyo Olympics. (Yonhap)
Will she stay or will she go?

It was on Sunday that the South Korean volleyball icon Kim Yeon-koung announced her retirement from international play, following the team's loss to Serbia in the bronze medal match at the Tokyo Olympics.

But a little over 24 hours later, Kim didn't seem so sure anymore.

Kim and the rest of her team arrived back home Monday night from Tokyo, greeted by dozens of fans at Incheon International Airport, west of Seoul, after making a surprising run to the semifinals and coming within a victory of the country's first medal in women's volleyball since 1976.

Asked about her future with the national team, Kim wouldn't commit, one way or another.

"I think it's a bit premature to say I've retired from the national team," the 33-year-old said. "It's something I have to discuss (with the national federation), and I will be able to make an announcement after some sort of a decision is reached."

After Kim's comments from Tokyo were first reported, Oh Han-nam, president of the Korea Volleyball Association, said he wanted to speak with Kim and listen to what she had to say.

"Kim Yeon-koung has dedicated herself to Korean volleyball for a long time. And obviously, given the current state of the national team, I'd love to ask her to stay on," Oh said Sunday. "But I also have to respect her wishes.

Kim, who spent the past season in South Korea, will take her talent to China for the upcoming season, having signed with Shanghai Bright Ubest in May.

Kim has now played in three consecutive Olympics, and South Korea reached the semifinals in two of them. It also lost in the bronze medal match at London 2012.

In 2012, Kim was the tournament's leading scorer and MVP, a rare honor for a player who didn't even win a medal and an illustration of her sheer dominance. In Tokyo, Kim finished second in scoring with 136 points. (Yonhap)