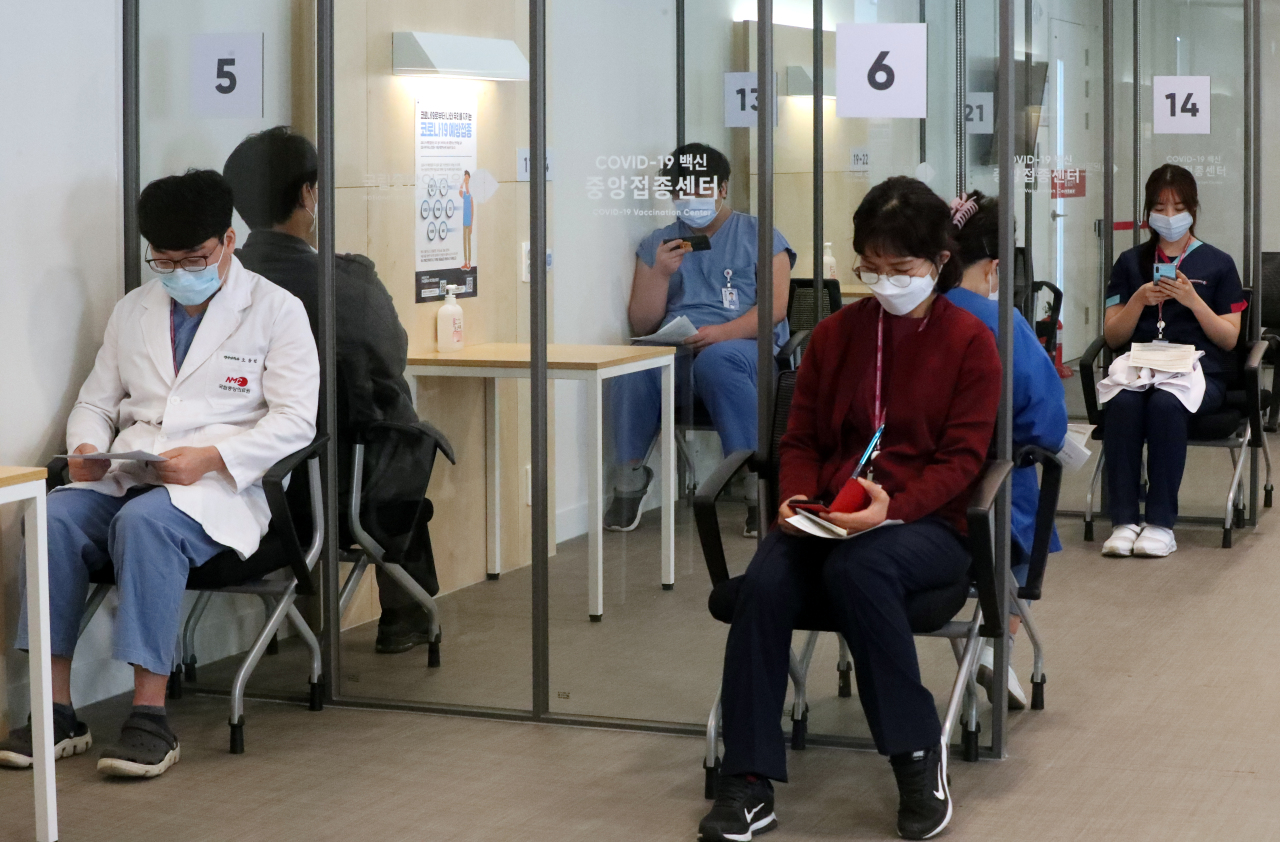 Medical workers wait in an observation area after receiving Pfizer's COVID-19 vaccine at a hospital in central Seoul on Saturday. (Yonhap)

South Korea's daily new coronavirus cases fell below 400 on Sunday, partly due to fewer testing over the weekend, as the country launched its first mass vaccination campaign last week.

The country reported 356 more virus cases, including 334 local infections, raising the total caseload to 89,676, according to the Korea Disease Control and Prevention Agency (KDCA).

Sunday's daily caseload marks a decline from 415 tallied the previous day. The figure was gradually increasing throughout last week with some ups and downs amid nationwide cluster infections.

There were eight more deaths from COVID-19, raising the total to 1,603.

On Friday, South Korea launched its first vaccination campaign starting with health care workers and patients at nursing facilities and hospitals across the nation with the vaccine developed by AstraZeneca.

The KCDA said 20,322 people across the country had received their first shots of the vaccines as of Saturday, which account for 0.039 percent of the country's population of 52 million.

The KCDA said a total of 112 mild symptoms, such as headaches and fever, were reported since Friday.

The AstraZeneca vaccine is deemed more convenient for mass inoculations as its storage temperature is 2 to 8 C, compared with the vaccine by US pharmaceutical giant Pfizer Inc. that requires ultra-cold chain storage.

Medical workers at hospitals for virus patients started receiving the Pfizer vaccine Saturday as well. They are the first batch of vaccines acquired through the World Health Organization's global vaccine COVAX Facility.

Over the past week, about 370 people were infected with the virus on a daily basis, down from an average of 454 people a week earlier.

It is a sign that the number of patients is slowing down due to social distancing rules, but health authorities warned against complacency.

The reproduction rate in greater Seoul fell below 1 last week, indicating that a single COVID-19 patient transmits the virus to less than one person.

The country decided to keep the current level of social distancing for another two weeks through March 14.

The capital area, home to around half of the nation's 52-million population, is currently under Level 2 distancing, which is the third highest in the five-tier system. Restaurants and bars in the capital area are allowed to remain open for an hour longer until 10 p.m.

Bans on gatherings of five or more people, however, are still in place nationwide.

Of the 334 locally transmitted cases, 117 cases were reported in Seoul and 139 in the surrounding Gyeonggi Province. Incheon, 40 kilometers west of the capital city, added 13 more cases.

There were 22 more cases from overseas, raising the caseload to 7,046.

The number of seriously or critically ill COVID-19 patients came to 135, down seven from the previous day.

The total number of people released from quarantine after making full recoveries was 80,697, up 346 from a day earlier. This indicates nearly 90 percent of COVID-19 patients reported here have been cured. (Yonhap)