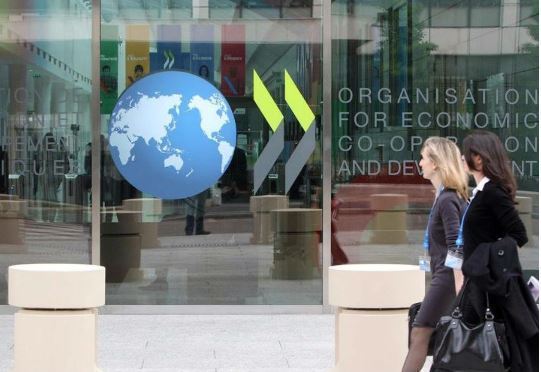 The local economy shrank 1 percent in 2020 from a year earlier, the worst on-year growth estimate since 1998 when the gross domestic product contracted 5.1 percent in the wake of the Asian financial crisis. The latest figure, however, marked the third-highest among 15 major economies, according to data from the Organization for Economic Cooperation and Development.

China topped the list of economic growth rate as its economy grew 2.3 percent, followed by Norway at minus 0.8 percent.

The OECD, a forum of 37 mostly advanced nations, has released annual growth projections for its 15 member states, including three non-OECD countries -- China, Indonesia and Saudi Arabia.

South Korea, Asia’s fourth-largest economy, outperformed a number of countries, including Indonesia, Sweden, the United States, Japan, Germany, the United Kingdom and Spain, which saw their economies contract between 2.1 percent to 11 percent.

Heavily reliant on exports for its economy and buoyed by improving outbound shipments, it fared better than major OECD member countries dependent on tourism and services industries that were dealt a heavy blow in the pandemic.

On the back of rising global demand for semiconductors and automobiles, the country’s exports, which plunged more than 20 percent in April and May last year, shot up 12.6 percent on-year in December, the sharpest growth since October 2018 when it grew 22.5 percent, according to data from the Ministry of Trade, Industry and Energy.

Since last year, the government has launched three rounds of relief cash handouts totaling 31.4 trillion won ($28 billion). The Ministry of Economy and Finance is expected to submit this year’s first supplementary budget plan to the National Assembly as early as next week on offering the fourth round of relief grants.

In line with the government’s fiscal support, Bank of Korea Gov. Lee Ju-yeol noted the central bank would likely maintain its current monetary easing stance for the time being.

“The local economy is slowly recovering mainly due to a rebound in exports and investment. However, the employment crisis is expected to linger amid a prolonged slowdown in the service sector,” Lee said during a parliamentary meeting.

“(The BOK) will continue its accommodative monetary policy to support the local economy to recover from the COVID-19 pandemic.”