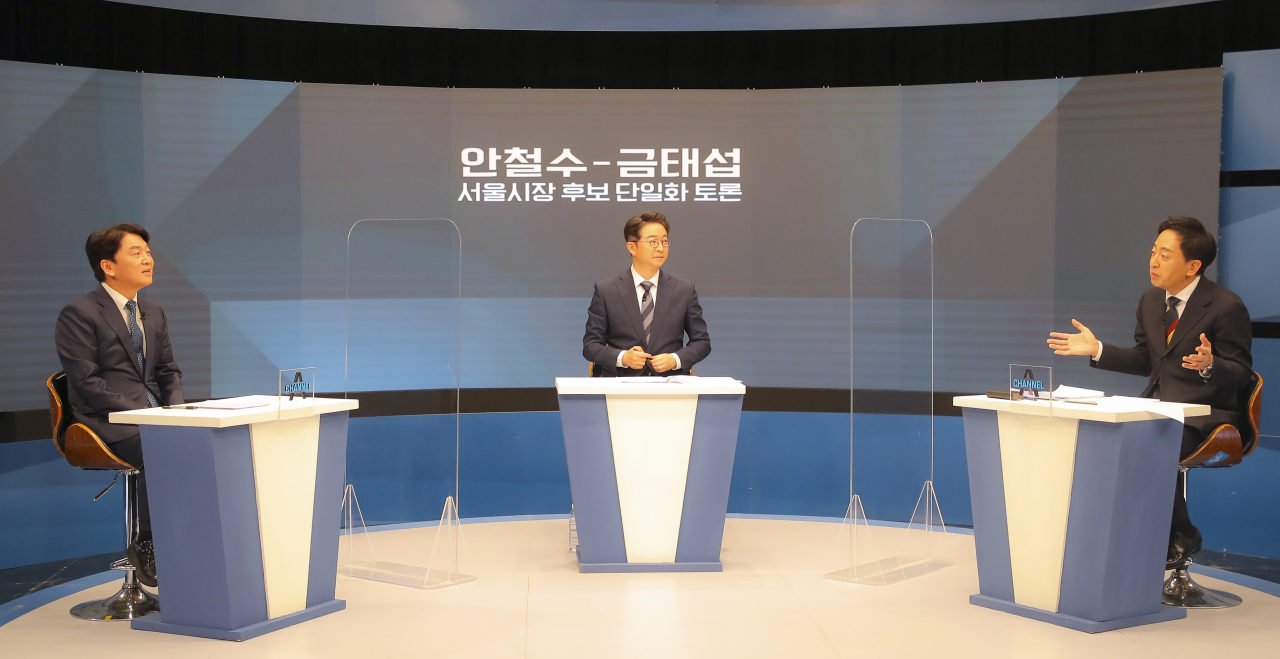 People’s Party leader Ahn Cheol-soo (left) and Keum Tae-sup (right), one of his rival candidates for the Seoul mayoral seat, speak during a TV debate held Feb. 18. (Yonhap)
The issue of LGBTQ rights has come to the fore again in South Korea’s political circles, sparked by the recent remarks from one of the leading candidates to be Seoul mayor.

The controversial remarks from minor opposition People’s Party leader Ahn Cheol-soo was made during a televised debate between him and rival candidate Keum Tae-sup last week while discussing an annual LGBTQ Pride parade held in central Seoul since 2000.

The Seoul Queer Culture Festival, held every year since 2000, has been staged at the most central and significant location in Seoul -- near the City Hall and Gwanghwamun area -- with a push from late Seoul Mayor Park Won-soon, despite opposition from conservative Christian organizations and more.

South Korea does not mention LGBTQ rights in the Constitution, but states in the National Human Rights Commission Act that “no individual is to be discriminated against on the basis of his or her sexual orientation.”

Nonetheless, marriage rights are only currently granted to heterosexual couples, and it was only recent that LGBTQ rights became discussed in the public, political and legal spheres.

In the wake of Ahn’s remarks, some rival candidates and political forces quickly fired back, accusing the candidate of being far from inclusive and failing to respect minorities’ rights. The debate has continued since, becoming a potentially important political topic in deciding the next Seoul mayor in April.

Following is a timeline of the recently sparked debate on LGBTQ rights in the Seoul mayoral race.

“Of course, I am opposed to discrimination. Individual rights must be respected. But the rights of others are just as important as his or her own rights. … If we hold the Queer Festival in the Gwanghwamun area, there will be people voluntarily coming to see the festival there, but there are also others who have to be in the area for other reasons or who visit with their children. Their rights to refuse such things should be respected as well.”

“It is hard to believe that this is a comment from a politician who should be upfront for the rights of LGBTQ and other minorities to live safely and without discrimination in Korean society. The Justice Party, being the party for sexual minorities, expresses deep regret over comments from (People’s Party) Chairman Ahn Cheol-soo. He should remember and respect that people have rights to refuse politicians who stir hate-based politics. We ask him to deeply look back on his remarks and apologize.”

"The issue of protecting minorities is related to the broad concept of human rights, so I did express disappointment during the debate. There is no difference in meaning between the right to refuse and hatred and discrimination. I hope he gives more thought to this."

"I think there’s some misunderstanding to my remarks on the ‘right to refuse.’ If we look at the Gwanghwamun queer parade, there have been excessively obscene nudity and sexual expressions. There were opinions from some citizens who worry of children and adolescents being unprotected from such acts, so I was explaining it by citing the example of the United States. I also oppose discrimination against sexual minorities and no one has any right to exclude or refuse them."

"In a broader spectrum, the principle is that the rights of minorities, including sexual minorities, must be protected and there should be no discrimination. I of course agree that discrimination must be prohibited. But I think the debate was on the queer festival being held in the central area near City Hall and Gwanghwamun Square, and the city of Seoul has a special committee to make a decision, and there are rules to that as well. This is an issue to be decided with usage rules of the City Hall square, and this is not something that a mayor can individually decide."