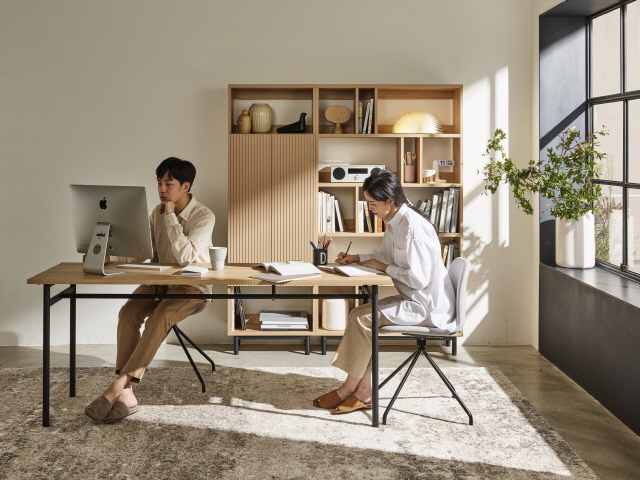 “May I know where you got the bookcase?” one comment read in response to a post showing a well-lit, nearly all-white room. Dambi, an author and blogger, who shared the original post on Instagram replied that it was from furniture company Basic Gagu.

These types of interactions are fairly common in the online sphere nowadays amid the furniture shopping boom fueled by strict social distancing measures and coronavirus woes that have affected various sectors of the country’s economy for better or worse.

Korea’s economy has been put to the test by the coronavirus crisis for a while now but the furniture industry has so far managed to not only stay afloat but prosper during over the course of the pandemic.

Online sales of furniture between January and November last year reached 4.49 trillion won ($4 billion), a 42.4 percent year-on-year increase, according to the latest data from Statistics Korea.

The increase in sales of items such as wardrobes, dressing tables and desks was far more significant than clothes and computers during the month of November.

Lee Young-ae, a professor at the Department of Consumer Science at Incheon National University, explained that the recent interior design boom reflects not only the impact of the coronavirus pandemic but the country’s increased household incomes and leisure time, as well as the growing number of single-person households.

“The obvious explanation is that we are spending a lot more time at home now,” Lee said.

The pandemic is not the only factor that drove up furniture sales last year as online furniture shopping has been on the rise for the last four years, going from 2.6 trillion won in 2017 to 3.4 trillion win in 2019.

“Though it does not equal to being ‘wealthy,’ the median income increase in the country has given many people an opportunity to pursue their interests in various fields. Leisure time has also increased, giving people more available time to pursue things [they enjoy,]” she said.

Then the coronavirus pandemic came, which forced people to spend more time at home. “People had to create a home office and make a separate living space. These tasks made us all more aware of interior design,” Lee explained.

The number of single-person households has grown at a rapid rate in the country in recent years. People living alone accounted for over 30 percent of households in 2019, nearly a twofold jump from 2000.

“Single-person households tend to be smaller places and the lack of space forces people to come up with ways to make their homes nice and efficient places to live, rather than unpleasant spaces,” Lee said.

People sharing images of their stylish homes on social media platforms such as Instagram has also in part fueled the phenomenon, Lee explained, as it often prompts positive responses, which provide a form of compensation for people’s efforts, “creating a virtuous circle.” 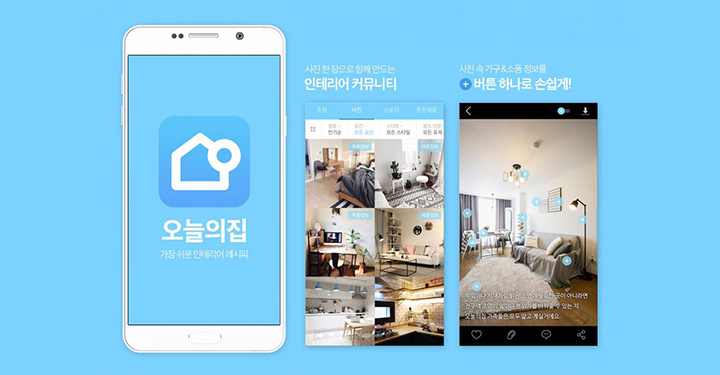 Kang Sung-joo, head of operations at the app’s operator, Bucketplace, said that the app’s appeal is the content that makes users visit the app time and again.

“Interior apps are often for short-term use, but Ohouse provides interior design information that can be useful in various situations and different seasons when change is necessary. We are providing the app as a service that can be part of someone’s life,” Kang told The Korea Herald.

With around 9 million photos available, people can not only check out other people’s homes for inspiration through using different filters and keywords, but they can also buy the furniture on display then and there.

“You can go straight to buying products without having to do additional research, which is our app’s big appeal,” he said.

The app’s main user base consists of those living in single-person households and newly married couples aged between 25 and 35, but the number of older users is also growing, Kang added.

The home decor boom has translated into a jump in the profits of established players as well.

Furniture manufacturer and distributor Hanssem also saw sales jump by 25.4 percent and its operating profit by over 230 percent during the third quarter compared to the same time last year.

Earlier this month, the company also launched a mattress subscription service on KakaoTalk for a monthly price of 9,900 won with plans to offer other types of furniture such as sofas and beds in the future.

The upward trend for Hanssem is predicted to have continued during the fourth quarter as a result of a growing interest in home interior design caused by the country’s housing market and the pandemic, according to a recent report by Yeol-mae Kim, an analyst at Eugene Investment & Securities Co.

“While there is a growing interest in finding new homes, there is a shortage of new properties and the number of old homes is growing. With the government’s housing policy focused on one household owning one home and increasing occupancy rates, the home ownership rate is also expected to rise,” Kim said in the report.

“With more time spent at home as a result of the coronavirus, kitchens and bathrooms that can be fit in within one week will sell well,” she added.

As more people are working from home, multipurpose items are gaining popularity, according to Kang, Head of Operations at Bucketplace.

“Home has become a place for a variety of activities ranging from studying, working, cooking, working out to even relaxing like you are at a café and naturally different items across the board are all enjoying a surge in popularity -- partitions and desks to create a better home office environment or houseplants to add a breath of fresh air, for instance,” he said.

“In the past, foldable or sitting tables that took less room used to be popular. But nowadays, dining tables that are suitable for doing various things such as eating, working and reading are in fashion.”