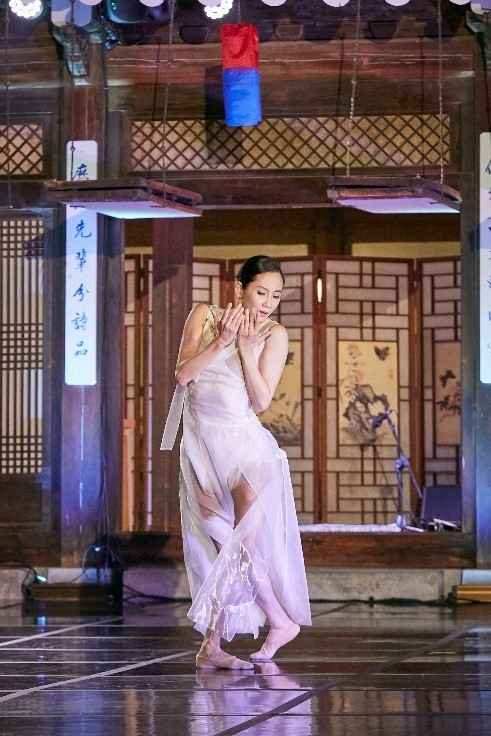 Ballerina Kim Ji-young will present a dance dedicated to her late mother as part of “Wishing Dance,” slated for Wednesday at the Seoul Arts Center in southern Seoul. (SIDance)

As has been the case with most festivals this year, SIDance, organized by the Seoul section of the UNESCO-based International Dance Council, will be held online, streaming dance performances on its official website as well as its channels on Naver TV and YouTube.

The festival will be led by Lee Jong-ho, its founder and artistic director. Lee is also the head of the international dance body’s Seoul section.

Prior to the official festival, a celebratory opening performance titled “Wishing Dance” will be held in person Wednesday at the Seoul Arts Center in southern Seoul.

Kim’s work is one of the highlights of the evening. Kim, formerly a member of the Korea National Ballet, will present a classical ballet dance backed by traditional ritual music, dedicating the show to her late mother.

The show, a joint production with the Korea Cultural Heritage Foundation, is the only in-person event in the festival.

Between opening day and Nov. 15, the dancers will present a total of 31 performances online. The program will include traditional ritual folk dance as well as contemporary dance.

Streaming of the performances will start at 8 p.m. every day, and the videos will be available for 24 hours without charge.

From Nov. 16 to 22 five films created by foreign dancers will be streamed, including “Maguy Marin: Time to Act” by David Mambouch, “Insular Bodies” and “Spectacles of Blending” by Stephanie Thiersch, and “Before / After” by Club Guy & Roni.

On Monday, recognized figures in the local performing arts scene gathered for an online forum as part of the festival and discussed the need for paid online performing arts shows. The forum was streamed via YouTube.

Details on the online program will be released soon. Tickets for the opening show at the Seoul Arts Center are priced between 20,000 won and 30,000 won.

For more information, check the official website at www.sidance.org/online_en/main.php.