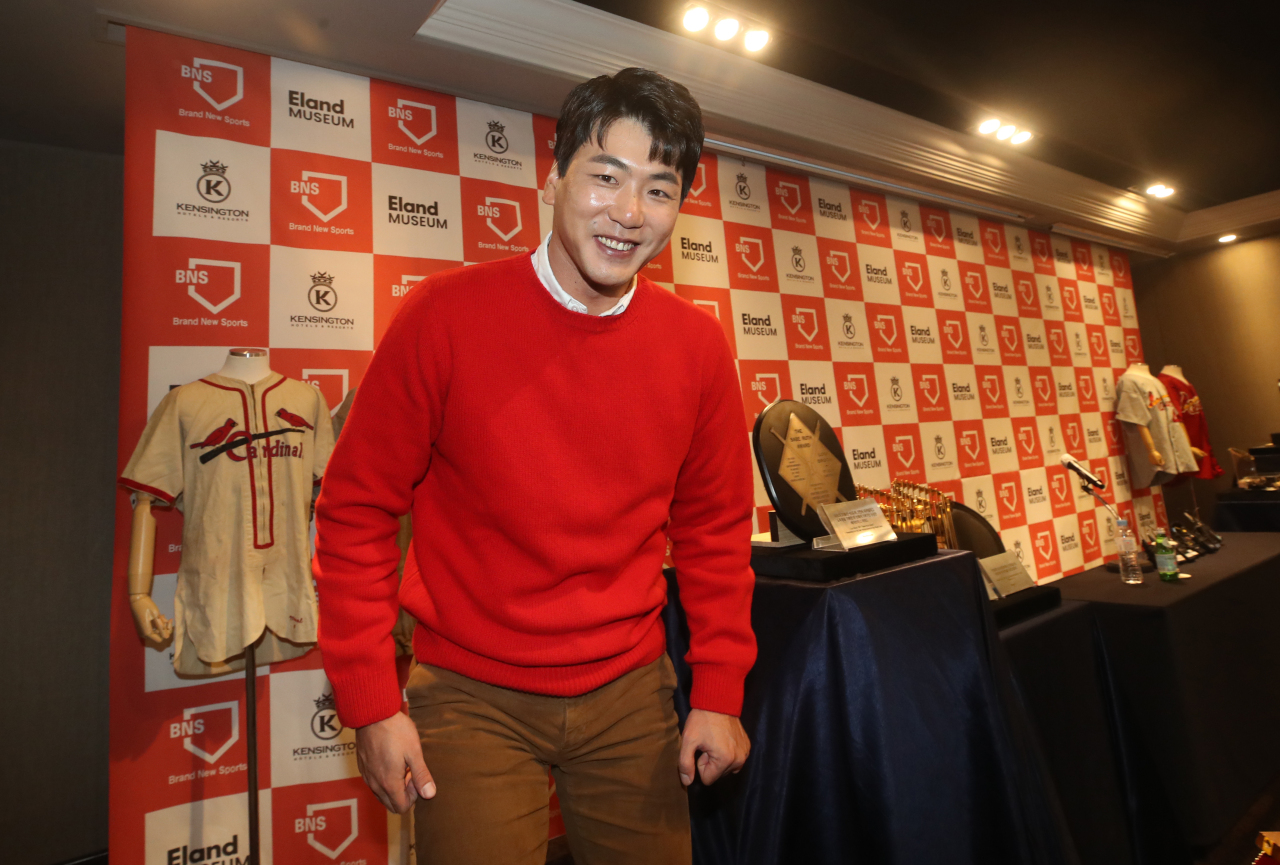 (Yonhap)
At first glance, South Korean pitcher Kim Kwang-hyun enjoyed a solid first season with the St. Louis Cardinals. Following 13 largely successful years with the SK Wyverns in the Korea Baseball Organization (KBO), Kim, who inked a two-year deal worth $8 million last December, was a perfect 3-0 with an excellent 1.62 ERA in eight appearances, including seven starts.

But in a season disrupted by the coronavirus pandemic, Kim admitted he wasn't even in his best shape. That he still managed to post those numbers gave the left-hander confidence that he can be even better next year.

"I think next year will be even more important than this year," Kim said during his press conference in Seoul on Friday. It was his first public appearance since arriving back home earlier this month and serving his mandatory 14-day quarantine.

"The most difficult part about this season was building my body up into shape," Kim added. "We all spent so much time indoors because of the pandemic, not to mention the disruption to the schedule. I think I was just dipping my toes into the major leagues this year, and I want to take care of my body better this winter and have an even better season."

As a big league rookie at 32 years old, the 2008 KBO regular season MVP had a whirlwind of a season. At the onset, there was uncertainty over his role, whether he would start or pitch out of the bullpen. Then spring training came to a screeching halt in March due to the coronavirus pandemic, and the season didn't begin until late July. Kim opened the year in the bullpen, unexpectedly handed the closer's job, and even got a save in his big league debut.

Then there was a COVID-19 outbreak inside the Cardinals' clubhouse, which forced the team to go on a two-week hiatus and then play catchup the rest of the way with multiple doubleheaders.

Kim was thrust into the rotation when the Cardinals returned, but he experienced his own health issue, as a kidney ailment sidelined him for about two weeks in early September.

Kim came back healthy and pitched well down the stretch, and also earned his first career postseason start.

Kim was the surprise Game 1 starter against the San Diego Padres in the best-of-three National League Wild Card Series. Kim gave up three runs in 3 2/3 innings in the Cardinals' 7-4 victory.

The Cardinals, though, dropped the next two games to be eliminated.

Through those ups and downs, Kim said his catcher, the future Hall of Famer Yadier Molina, played a major role in his success.

"He makes pitchers feel so comfortable," Kim said. "He is the kind of catcher who makes sure the pitcher will throw pitches he's most confident with, rather than pitches that he thinks batters can't hit. I wish we would see more catchers like that in Korea."

Kim said he marveled at the breadth and depth of Molina's knowledge of St. Louis pitchers.

"He always put down signs for pitches that I had confidence in, and it just shows you how much work he put in just to study his pitchers," Kim said. "He's such a great catcher. I hope I can continue to pitch to him on the same team."

Kim said earning his first big league victory, on Aug. 22 against the Cincinnati Reds, was the most memorable moment of the season.

"It was a dream come true," he said. "During the game, I was too nervous to feel anything. But once the game ended, I felt pretty emotional."

Aside from fulfilling his personal dreams, Kim said he also hopes to pick up as much information as he can on how major league teams are run and how big leaguers prepare for each game, so that he could impart that knowledge to a younger generation of players.

Going from the bullpen to the rotation brought its own challenges, but Kim said having some extra time off early in the season following the Cardinals' COVID-19 outbreak was a blessing in disguise.

"I knew it would be a difficult transition, but I kept telling myself I could get it done," Kim said. "I realized that I could do a lot of things as long as I stay positive and don't put too much pressure on myself."

Kim said he was most pleased with minimizing damage throughout the season, as attested by his sub-2.00 ERA. Some underlying numbers suggest, however, Kim was lucky to post the numbers that he did. Kim enjoyed some batted ball luck -- meaning, some hard-hit balls ended up being outs instead of hits -- and the Cardinals' defense also bailed him out on occasions.

Kim said he believes he put himself in a position to enjoy some luck on the mound, considering how much adversity he's had to overcome and how much work he's put in just to get to the stage.

"I think you have to be good to be lucky," he said. "I think luck will eventually even out for everyone. I want to reach a point where I will overcome bad luck with ability and hard work."

In late March, Kim posted a cryptic message on Instagram, detailing his frustration over the delayed start to his rookie season. Kim admitted on Friday that he was in a dark place then, but the thought of making his childhood dream come true kept him going.

"Back then, I wondered, 'Why am I even here?'" Kim said. "I went there to play baseball and I couldn't do it then. But looking back, I think I enjoyed all that luck on the mound because I survived that tough period." (Yonhap)