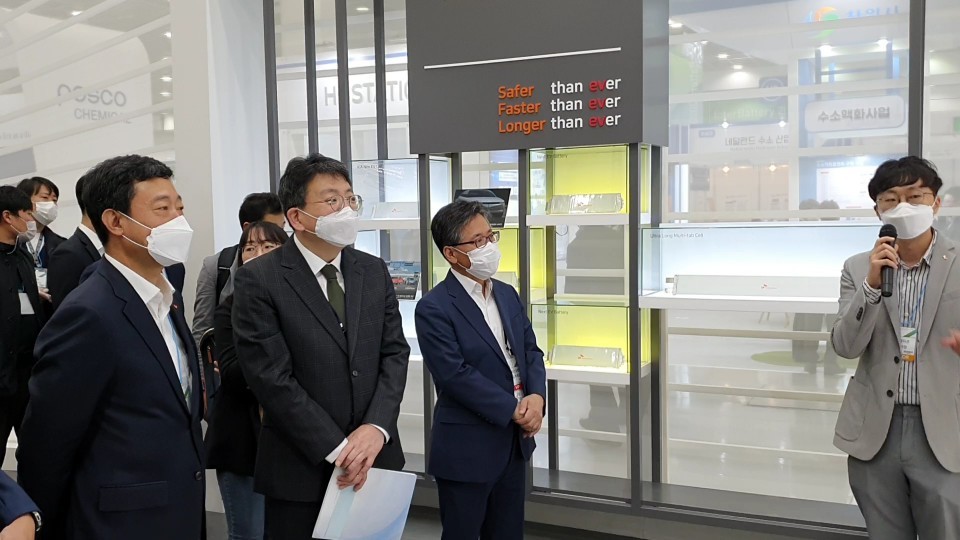 At the expo, which will be held until Friday, 198 companies are participating, including LG Chem, Samsung SDI and SK Innovation, to tout their battery technologies. To enter the expo, visitors had to scan their QR codes and wear masks and disposable gloves.

As Korea’s battery powerhouses boasted their technologies, also hovering over the expo was the word “safety” due to the recent cases of fire from EVs loaded with Korean-made batteries.

The Ministry of Land, Infrastructure and Transport released a statement on Oct. 8, which said there is a “possibility” that separators inside batteries might have been compromised to cause short circuits and trigger fires, adding uncertainties with an incomplete result.

At LG Chem’s booth, the biggest one at the expo, the company displayed its advanced battery technologies such as lamination & stacking technology and safety reinforced separator technology.

“What about the heating issue?” said Choi Nam-ho, director general of the Ministry of Trade, Industry and Energy, who visited LG Chem’s booth first.

Though Choi’s simple question was directed at batteries for laptops, not electric vehicles, it was obvious what was troubling his mind: battery safety.
An LG Chem official who was giving Choi a tour around the booth gave him a bright smile and said, “Sir, you don’t have to worry about that.”

To the LG Chem official’s answer, Choi didn’t ask further. After getting briefed on LG Chem’s next-generation lithium-sulfur batteries, Choi moved on to the next booth of Samsung SDI.

After getting briefed on Samsung SDI’s batteries for small IT gadgets and e-scooters and its state-of-the-art solid-state battery technology that can endure 210 degrees Celsius inside an oven, Choi moved on to the booth of SK Innovation.

Aware of controversy surrounding its rivals, SK Innovation’s theme for the expo “Safer than ever, faster than ever, longer than ever” was written on one side of the booth.

“EV fires are not someone else’s problem and SK Innovation is always on alert. Batteries’ price competitiveness and performance are important, but safety must be a top priority,” Jee said.

Regarding a lawsuit with LG Chem, Jee said SK Innovation was open to talks.

SK Innovation is waiting for the final ruling for a trade secret lawsuit LG Chem had filed against the company with the US International Trade Commission last April for unlawfully acquiring trade secrets. If the USITC upholds the default judgement for its final ruling set for Oct. 26, SK Innovation will have to halt imports of electric vehicle batteries, parts and manufacturing equipment to the US.

As to whether SK Innovation will split off its battery business just like LG Chem, Jee said he is reviewing options.