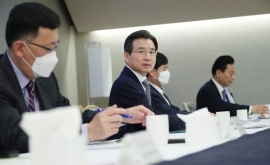 As South Korea is likely to face a severe economic shock in the second quarter under the novel coronavirus pandemic, the quarterly performance will determine the nation’s growth for the entire year, Vice Finance Minister Kim Yong-beom said Friday.

“Shocks are expected to be concentrated in the second quarter,” Kim said during a meeting with senior ministry officials.

“As the risks stemming from (the pandemic) prolong, it could evolve into a bigger risk that could shake both the real and financial economies.”

Kim vowed that the government would fully mobilize stimulus packages -- including the first and second supplementary budgets approved so far -- in the second quarter to minimize the economic fallout from the pandemic.

The National Assembly passed the first extra budget of 11.7 trillion won ($9.8 billion) in March and second supplementary budget of 14.3 trillion won last month, to minimize the economic fallout from COVID-19. The third extra budget, estimated to be around 40 trillion won, is set to be unveiled in early June, mainly to boost investment in the local sectors and the job market.

Since last week, South Korea started handing out cash to most households here for its relief handout program. One million won is handed out to households with four or more people, while those with fewer family members receive a minimum of 400,000 won.

South Korea has so far pledged coronavirus relief packages worth some 240 trillion won to provide a cushion for companies and economies hit by the pandemic.

The export-reliant nation’s economy shrank 1.4 percent on-quarter in the first quarter, marking the sharpest quarterly contraction since the last quarter of 2008, when it was hit by the global financial crisis.