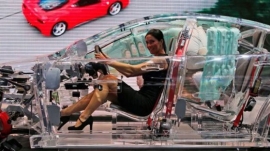 Foreign car brands captured 1 percent of the local market for the first time in history in 2002, when Korea co-hosted the FIFA World Cup. Sales reached 16,119 units with a market share of 1.3 percent.

When the share reached its all-time high of 16.73 percent in 2018, more and more market observers predicted the 20 percent milestone could be achieved in 2019 or 2020.

Some said the retreat was attributable to the economic slowdown and the sagging private consumption last year, pointing out both domestic and foreign brands suffered a decline on-year in sales last year. 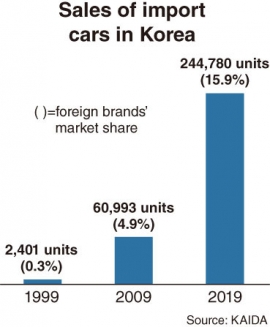 This year the automobile industry has faced an unpredictable factor, COVID-19. The epidemic, paradoxically, could elevate the market share of imported cars, which has ranged between 14 percent and 17 percent for the last five years.

Since 1999, imported cars’ market share has fallen only twice, in 2016 and 2019. But the recent data shows that there is a high chance of their market share rebounding this year.

According to the Ministry of Trade, Industry and Energy, domestic automakers’ sales came to 473,962 units during the January-April period this year, down 4.1 percent on-year.

In contrast, foreign brands reported a growth of 9.5 percent over the corresponding period as they sold 81,991 cars.

As for only April, foreign brands saw their sales climb 18.7 percent on-year, while domestic players posted only 6.4 percent growth. These were on the back of a cut in specific consumption tax, led by the government to promote consumption, which started in March.

Apart from the tax benefit, an executive of the Korea Automobile Importers and Distributors Association seemingly downplayed the sharp growth of foreign car sales, saying that it was thought to have been buoyed by a series of new models being launched recently.

But domestic and import brands have faced contrasting fortunes amid the pandemic.

Meanwhile, foreign carmakers, such as Mercedes-Benz and BMW, were still taking less than 15 percent of the market as of April despite the gap with the domestic players -- 14.75 percent for the first four months of the year.

An automobiles-segment analyst from a brokerage firm in Seoul estimated that the consumer sentiment among the high-income bracket -- the main buyers of import cars with higher price tags -- have not been affected by the novel coronavirus.

In April, sales of the Mercedes-Benz S Class increased by 62 percent from a month earlier, to 588 units, and those of the BMW 7-Series, a 12.7 percent growth on-month with 230 units, the KAIDA data showed.

Porsche Korea saw its on-month and on-year sales surge by 22.7 percent and about 200 percent, respectively.

An employee of an import brand dealership said the issue was the manufacturing capacity, involving the operation rates for assembly lines, among European carmakers. “Consumers’ preference for import cars -- among middle-income as well as high-income earners -- has quickly spread from Seoul to major metropolitan cities in the 2010s.”