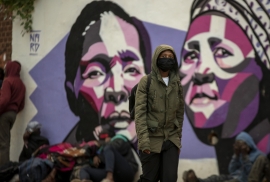 A man wearing face masks to protect herself against coronavirus, walks on the street in Hillbrow, Johannesburg, South Africa, Friday. South Africa went into a nationwide lockdown for 21 days in an effort to mitigate the spread to the coronavirus. (AP)

Two other major international rating agencies Fitch and S&P had cut the credit rating of Africa's most developed economy to subinvestment level in 2017.

Losing its last investment grade rating will see the country being excluded from the FTSE World Government Bond Index.

The downgrade late Friday came as South Africa began a three-week nationwide lockdown to try halt the rapid spread of the novel coronavirus which has infected more than 1,100 people in the country.

"The key driver behind the rating downgrade to Ba1 is the continuing deterioration in fiscal strength and structurally very weak growth," Moody's said.

"The government's own capacity to limit the economic deterioration, in the current shock and more durably is constrained," it said, blaming "unreliable electricity supply, persistent weak business confidence and investment as well as long-standing structural labour market rigidities."

The South African government said the decision by Moody's "could not have come at a worse time," adding that it will "further add to the prevailing financial market stress".

South Africa slipped into recession during the final quarter of 2019.

In the past five years, South Africa has posted its weakest growth rates -- never exceeding 1.3 percent and in some years falling below one percent.

"To say we are not concerned and trembling in our boots about what might be in the coming weeks and months is an understatement," said Finance Minister Tito Mboweni. (AFP)