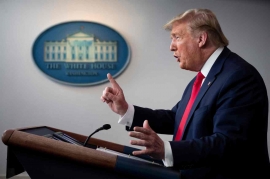 In this file photo taken on Thursday, US President Donald Trump speaks during the daily briefing on the novel coronavirus, COVID-19, in the Brady Briefing Room at the White House, in Washington, DC. - President Donald Trump issued a federal order on Friday to force auto giant General Motors to manufacture ventilators, as supplies of the crucial hospital equipment grow short and coronavirus infections mount across the country. (AFP)

Trump invoked the rarely-used Defense Production Act (DPA) to order GM to speed up its commitment to make ventilators in one of its auto plants after delays in negotiations.

The act, designed for use in wartime to commandeer private business to manufacture for defense needs, will allow the White House to require that GM "accept, perform, and prioritize federal contracts for ventilators," Trump said in a statement.

Negotiations had been "productive," he said, "but our fight against the virus is too urgent to allow the give-and-take of the contracting process to continue to run its normal course."

"GM was wasting time. Today's action will help ensure the quick production of ventilators that will save American lives."

At a later White House press conference he added that the decision "should demonstrate clearly that we will not hesitate to use the full authority of the federal government to combat this crisis."

He also announced that Peter Navarro, a top White House advisor formerly at the forefront of Washington's trade dispute with China, will now coordinate further initiatives under the DPA.

Earlier in the day Trump demanded in a tweet that both GM and rival Ford move quickly on fabricating ventilators, essential to help seriously ill coronavirus patients breathe.

GM quickly answered back that it had a deal with medical equipment maker Ventec Life Systems to build the critical care equipment in its Kokomo, Indiana, auto plant, and would likely be able to begin shipping next month.

But the White House was apparently dissatisfied with the company's response and moved to invoke the DPA about four hours later.

GM said in a statement after Trump's announcement that they were already taking action.

"Ventec, GM and our supply base have been working around the clock for over a week to meet this urgent need," the company said.

According to The New York Times, the White House had planned earlier this week to announce the GM-Ventec deal, but it reportedly ran into problems because of a projected $1 billion cost for retooling an auto plant for production.

With no deal to announce, Trump then lashed out against GM and Ford on Twitter Friday morning.

"General Motors MUST immediately open their stupidly abandoned Lordstown plant in Ohio, or some other plant, and START MAKING VENTILATORS, NOW!!!!!!" Trump tweeted.

It was an unacknowledged about-face for Trump, who had actually cheered GM's sale of its Lordstown factory to a company planning to build electric trucks, tweeting in May 2019 that it was "GREAT NEWS FOR OHIO!"

Andrew Cuomo, governor of New York, the US region most heavily impacted by the coronavirus, has repeatedly pleaded with the government for more ventilators, with infections soaring.

Cuomo said he expects the epidemic won't peak in the state for another three weeks.

Seemingly contrary to his tweets Friday, Trump, speaking on Fox News on Thursday, said Cuomo's demands for ventilators were exaggerated.

"You know, you go into major hospitals sometimes and they'll have two ventilators and now all of a sudden they're saying, 'Can we order 30,000 ventilators.'"

In its earlier statement GM said it and Ventec believed they could get production up to a level of 10,000 ventilators per month from their operation, depending on demand.

Ventec is also ramping up its own production in its Washington state plant.

Shortly after Trump's tweet Ford, too, responded with assurances it was working hard to help resolve medical equipment shortages.

"We have started delivering tens of thousands of Ford-produced face shields to hospitals and police agencies, including the NYPD," it said in a statement.

"We have teams working flat-out with GE Healthcare to boost production of simplified ventilators, and with 3M to increase the production of powered air purifying respirators." (AFP)