Korean Air, the country’s biggest and national flag carrier, is trying to assuage customers ill at ease about a revised plan for the airline’s loyalty program, saying the latest changes reflect global standards, including reasonable benefits for customers in comparison to foreign carriers, according to the company on Friday.

The airliner recently uploaded a notice to its homepage to clarify facts about the revision plan for the loyalty program amid strong backlash from customers, including some 1,000 people reportedly preparing for a class-action suit. 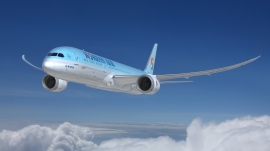 The national flag carrier announced in December its plan to reform the Skypass membership reward program on a timetable to implement a new scheme from April 2021.

But the plan received strong backlash from customers, as they viewed that the revised system would only benefit first-class and business-class passengers and make it more difficult for economy-class passengers to take advantage of the carrier’s mileage points system.

According to the revision, Korean Air plans to allow customers to use up to 20 percent of their saved miles when they buy tickets, labeling the system “mixed payment,” so that passengers would be able to better utilize their mileage points.

But because the envisioned mixed payment service is to be enabled only when passengers buy tickets directly from the Korean Air site or app, critics have raised concerns for those who often buy plane tickets via third parties that offer tickets at lower prices.

In response to the criticism, Korean Air justified the move saying online that the carrier offers its tickets at the same price range as other discount sites and travel agencies.

The revision also includes changes to the charging standard for mileage point users. Currently, the carrier offers bonus seats by charging designated miles for different regions, largely categorized into continents. But after the changes are applied to be set on service distance, more mileage points will be charged for flights going further.

Korean Air explained the changes are being made to follow global standards, and gave comparisons to foreign airlines to explain that its loyalty program still offers more benefits to passengers than competitors.

“Under the new International Financial Reporting Standards, airlines’ mileage points are appropriated as liabilities, becoming a factor that hurts the financial soundness of companies,” an industry official said. “Preventing the Korean company from acting to improve its financial soundness would only come back to lower the competitiveness of the national flag carrier.”

As of Friday, 1,475 people had signed up to participate in filing the class-action suit against Korean Air, led by law firm Taerim.