SAN FRANCISCO – South Korean biopharmaceutical firm Celltrion is likely to be consolidated with two of its subsidiaries -- Celltrion Healthcare and Celltrion Pharm -- by as early as 2021, if the shareholders approve, a top executive said Wednesday

Speaking at the JP Morgan Healthcare Conference 2020 in San Francisco, Chairman Seo Jung-jin also did not rule out the consolidation of two other subsidiaries -- Celltrion Skincure and Celltrion Entertainment.

Although Seo has announced his retirement at the end of 2020, making the consolidation uncertain, Celltrion shares finished on an upbeat note Wednesday on positive speculation.

The Celltrion chairman said he expects a consolidated on-year revenue increase of 100 percent in 2020 and another on-year 100 percent increase the following year. In terms of Celltrion Healthcare, on-year operating profit will be over 50 percent, Seo said. 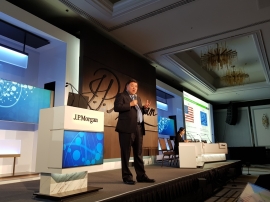 Remsima SC is only approved to treat rheumatoid arthritis as of now, but Seo said Celltrion filed for all other indications at the European Medicines Agency on Tuesday.

Remsima SC will be directly sold by Celltrion Healthcare in Europe, where it will launch in 27 countries between June and July. The direct-sales system will then branch out to Canada in 2020 and the US in 2021.

“It can be considered an original drug, as we have patented it in 120 countries,” Seo stressed.

The price would be higher than original blockbuster drug Humira (adalimumab), as Remsima SC will be used for rheumatoid arthritis patients whose condition does not improve with the Humira injection, he said.

“All doctors and patients are awaiting Remsima SC’s launch. This drug works better as you increase the dosage, without side effects,” Seo said.

In March, Celltrion will file for a biosimilar of a new type of Humira, whose official data will be disclosed at congresses. For this, Celltrion is taking a different pricing strategy.

“All the old-type drugs cannot compete with us now, as we have shockingly reduced the cost through high titer with state of the art technology that maintains the efficacy,” Seo teased.

At its China plant, Celltrion envisions the production of Insulin biosimilars.