President Moon Jae-in is expected to accept it later in the day, as his office is in the final stage of selecting her successor, according to the source. 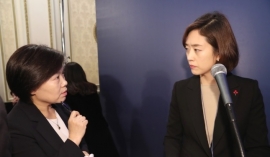 Under South Korea's election law, civil servants are required to quit their public jobs no later than 90 days ahead of the polling date -- Jan. 16 for this year's poll.

The three officials are the latest Cheong Wa Dae aides to Moon to join the election race. Around 60 people who have worked with Moon either under his administration or the Roh Moo-hyun government are setting their sights on parliamentary seats through this year's elections, although some have voiced concern about the rush to the elections by Moon's former and current presidential aides.

Other officials to run include Moon's first and second spokespeople at Cheong Wa Dae -- Park Soo-hyun and Kim Eui-kyeom.

Yoon Young-chan, who served as Moon's senior press secretary for more than a year from May 2017, is also preparing for an election campaign.