[Newsmaker] Restricted military areas to be opened up for business development

Restricted military areas in Korea, concentrated in regions adjacent to the capital, will be opened up to the public for business development, the ruling Democratic Party of Korea said Thursday. 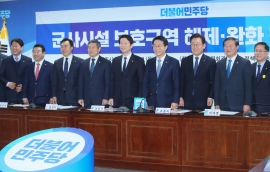 The ruling Democratic Party of Korea and Defense Ministry discuss on Thursday opening up restricted areas to the public for business development. (Yonhap)

The areas to be affected are mostly near Seoul in Gyeonggi and Gangwon provinces and cover 77 square kilometers -- roughly 27 times the size of Seoul’s financial district of Yeouido.

After a morning meeting with the Defense Ministry, the party unveiled the government plan and said the areas would include land as far away as the central Chungcheong and southeastern Gyeongsang provinces.

Once the changes take effect in early February, municipalities will be able to run businesses at the sites without consulting the military. The deregulation measure is expected to invite business opportunities and boost local economies.

The government also said it had separately eased regulations on other areas under military jurisdiction, so that more areas could be made available for business development. At the same time, the government had revised defense regulations so as to allow more companies to run businesses in restricted areas as long as they do not interfere with military operations.

Further, the ruling party and government addressed repeated calls from regional municipalities bordering the Demilitarized Zone separating the two Koreas that the government adjust the civilian control line -- an area roughly 5-20 kilometers south of the DMZ that bans civilian entry.

“We agree more people would be able to go there, so that the place starts to prosper. Additional easing of regulations to make that happen is under consideration,” the ruling party’s Floor Leader Lee In-young said.

Defense Minister Jeong Kyeong-doo concurred, saying, “Our military operations are seeing some changes in the advent of newer military technology. We will work to the advantage of local residents while standing mindful of successful operations.”

Gov. Lee Jae-myung of Gyeonggi Province, which borders the DMZ, said the government needs to ascertain whether the regulations it has put in place are reasonable and not redundant.