The Korea Football Association announced Monday that Valencia CF midfielder Lee Kang-in and SV Darmstadt 98 midfielder Paik Seung-ho will not be available for the under-23 national team for the 2020 Asian Football Confederation U-23 Championship, which will run from Jan. 8-26 in Thailand. This event will also serve as the Asian qualifying tournament for the 2020 Tokyo Olympics.

Head coach Kim Hak-bum announced his 22-man roster last Tuesday, leaving one spot open in hopes of filling it with either Lee or Paik. The deadline to submit the final team was Sunday. 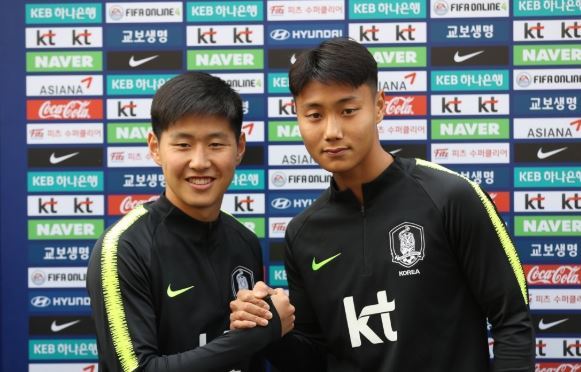 (Yonhap)
The AFC tournament isn't on the FIFA match calendar, and clubs aren't obliged to release their international players for the occasion. Coach Kim and the KFA had been in talks with Valencia in Spain and Darmstadt in Germany over their South Korean players' release.

According to the KFA, Valencia would have agreed to release Lee if not for his quad injury. Lee is currently rehabbing in South Korea. The KFA added that Darmstadt wanted Paik to play in the group stage only, whereas South Korea wanted the 22-year-old for the entire competition.

The KFA successfully convinced another German club, SC Freiburg, to release midfielder Jeong Woo-yeong. The 20-year-old is the only Europe-based player on coach Kim's team.

Both Lee and Paik have played for the senior national team.

Lee, in particular, had a coming-out party at the FIFA U-20 World Cup in June, where he won the Golden Ball as the tournament MVP at age 18 after guiding South Korea to a runner-up finish.

The KFA said FC Seoul defender Yoon Jong-gyu will round out the U-23 national team. He'll join the rest of the team in their training camp in Malaysia later Monday.

The top three teams from the AFC tournament will reach the Tokyo Olympics. Japan have already qualified for the Olympics as the host country. This means that if they reach the semifinals, the three other semifinalists will be guaranteed spots in the Olympics without having to play the third-place contest.

In Thailand, South Korea will face Uzbekistan, China and Iran in Group C. There are four groups of four, and the top two from each will move on to the quarterfinals.

South Korea will play practice matches against Saudi Arabia on New Year's Eve and Australia on Friday, both behind closed doors.

The second match will be against Iran on Jan. 12, and South Korea will close out the group stage against Uzbekistan on Jan. 15.