People sought comfort from books in past decade

Inspirational nonfiction and heartwarming novels swept bestseller lists in the 2010s, an indication that people sought solace from books over the past decade, according to the Kyobo Book Center.

“The Things You Can See Only When You Slow Down,” written by Ven. Haenim, a renowned Buddhist monk in South Korea, was the bestselling book of the decade. After its release in 2012, it remained a bestseller for two years. 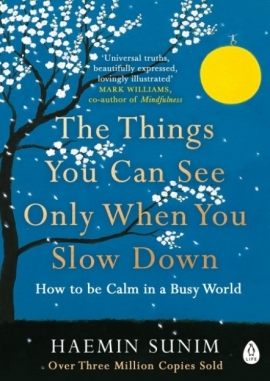 The English-language edition of “The Things You Can See Only When You Slow Down,” written by Ven. Haenim and translated by Kim Chi-young (Penguin Random House).

Translated into English by Kim Chi-young, the illustrated book offers advice and comfort for those experiencing setbacks at work and difficulties in handling interpersonal relationships.

The other four most sold books of the decade were the Japanese novel “The Miracles of the Namiya General Store” by Keigo Higashino, “Youth, It’s Painful” by Kim Ran-do, “The Courage to Be Disliked” by Ichiro Kishimi and “Temperature of Language” by Lee Ki-ju.

Meanwhile, reading rates among adults in Korea -- that is, the percentage of adults who read at least one paper book per year -- have fallen over the past few years, according to the Ministry of Culture, Sports and Tourism. The figure hovered around 70 percent in the mid- to late 1990s but plummeted to 65.8 percent in 2010. Although it recovered to 71.4 percent in 2013, it reached a record low of 59.9 percent in 2017.