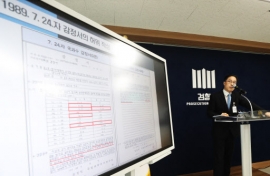 [1] A retrial should be held for a man who may have been wrongly convicted of the rape and murder of a 13-year-old girl in 1988, in light of new evidence and a series of flaws in the original investigation, the prosecution said Monday.

[2] The Suwon District Prosecutors’ Office has reopened the decades-old case after Lee Chun-jae, who is already serving a life sentence for the rape and murder of his sister-in-law in 1994, confessed to the crime in October.

[3] A recent DNA breakthrough has pinpointed Lee as the culprit behind the Hwaseong serial murders -- that is, the murders of 10 women in Hwaseong, Gyeonggi Province, from 1986 to 1991.

[4] The case of the 13-year-old victim in Hwaseong was at first regarded as the eighth of the serial murders but police then charged the 52-year-old man, surnamed Yun, who was later convicted.

[5] The prosecution contends that the forensic report, a key piece of evidence that led to the conviction of Yun, was made up, not based on the hair samples. The police have denied falsifying the report.

[1] The bones of some 80 people, 40 of them unidentified, were found Thursday at a former prison site in Gwangju, rekindling suspicions that victims of the 1980 military crackdown on democratic protests were buried en masse there by authorities.

[2] A foundation established in memory of the democratic movement, which took place from May 18-27, 1980, has suggested the unidentified human remains may belong to hundreds of protesters who went missing.

[3] The Justice Ministry said Sunday it would look into possible links between the remains and the violent crackdown on civilians by the military nearly four decades ago.

[4] According to officials, bones of 80 people were excavated from a mass grave for prisoners without any kin.

[5] While the estimated death toll varies, government figures say about 200 civilians were killed in what is commonly referred to as the Gwangju Uprising.