Kukje Gallery’s Busan venue is holding a solo exhibition of Daniel Boyd, featuring 11 convex-dot paintings based on historical photos that Boyd has come across in different sources, from family photo albums to the photo collection of the British Museum. 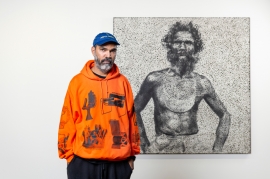 Boyd is an Australian artist who transforms photos of the colonial and postcolonial periods into paintings that raise questions about the colonial history of Australia and the power dynamic in the historical narrative.

Boyd began his artistic practice as part of his efforts to make sense of his indigenous culture, which has often been suppressed, denied, misrepresented or overlooked.

“My experience, my art that I make, starts with questions I have about where I am placed in within the whole,” said Boyd, an Australian artist who is a descendant of the Kudjla/Gangalu peoples from Far North Queensland.

“Untitled (YMKSMRWAKP)” directly addresses this issue of perspective. This painting is based on a 19th-century photograph of a man wearing a breastplate inscribed King Sandy. He is from the Yugura nation, located around the region of present-day Brisbane, Queensland. The nickname was given by British settlers who tried to monitor and understand the aborigines, according to the artist.

The original photo imbued with a colonial gaze has been a historical document that seems to epitomize how British settlers saw the Aboriginal Australians. Boyd, here, recreates that image into a work of art to dismiss the Eurocentric perspective embedded in the photo.

Through his work, Boyd brings the figure to more personal level, to create something that his people can relate to.

Boyd added that he wanted to place a person of color at the center of his artwork. By bringing people who have been on the peripheries in the cannon of art, he tries to make shifts in understanding of history of art.

Throughout his works, he makes extensive use of glossy convex dots, while leaving sort of ellipses between them. He started to use the technique in 2009 and continued to apply it in his paintings where glaze-like texture of dots appear to be overlaid upon original images. Boyd calls the dots as “lenses,” which metaphorically represent that everyone has right to interpret an image in their own way.

By recreating historical images, Boyd also tries to refresh memories and culture that his people have been lost over the past years.

In “Untitled (FCSDFPIV),” for instance, Boyd has recreated geometric shapes found in sand drawings originally documented on Pentecost Island in the South Pacific nation of Vanuatu -- the birthplace of his great-great-grandmother’s uncle, who was later taken as a slave from there to Queensland to work in the sugarcane fields.

Reproducing the anthropological records of aboriginal culture in the Pacific region is the artist’s attempts to summon the cultural inheritance that has been disconnected, Boyd explained.