BARCELONA (AFP) -- Barcelona and Real Madrid could not be separated on Wednesday in a Clasico that was overshadowed by violent clashes between Catalan independence protestors and police outside Camp Nou.

After being postponed in October, there were renewed fears of unrest around Spain's most famous fixture and while the match was only briefly interrupted by yellow beach balls thrown onto the pitch, outside the stadium, chaos ensued.

Masked protesters had set bins on fire and thrown rocks and glass bottles at police, who responded by firing foam bullets.

Forty-six people were lightly injured in the clashes, including eight who needed to be taken to a medical centre for extra care, local emergency services said.

Five people were arrested, according to a police spokesman.

The protesters, many of them carrying Catalan separatist flags, began setting up barricades in the middle of the street which they then burned, after police arrived in dozens of police vans.

Inside the stadium, the match passed largely undisturbed, save for a brief pause early in the second half as dozens of yellow beach balls had to be removed by stewards.

"There was tension in the game and I noticed when some yellow balls fell down," said Barcelona coach Ernesto Valverde.

"But nothing more. We tried to give a sense of normality."

"Everyone wanted to see a good football match," said Real coach Zinedine Zidane. "In that sense I think we can be happy."

The game was less eventful than expected, with neither Barcelona nor Real ever really at their best and both, perhaps in the end, happier not to win than to lose.

A goalless draw means Barcelona stay top of La Liga, ahead of Real on goal difference while the historic score in league meetings between the two rivals remains 72 victories apiece.

"More than a Clasico", read the frontpage of Barcelona daily Mundo Deportivo on Wednesday morning ahead of a fixture that while always politically charged, had assumed even greater significance than usual.

The game was originally due to be played on October 26 but was postponed due to violent protests breaking out across Catalonia, following the sentencing of nine independence leaders to prison.

In the 53 days since, expectations swelled around what Democratic Tsunami, the Catalan independence protest group, might do to disrupt the most watched club football match in the world.

But in truth, there was less than expected during the 90 minutes. 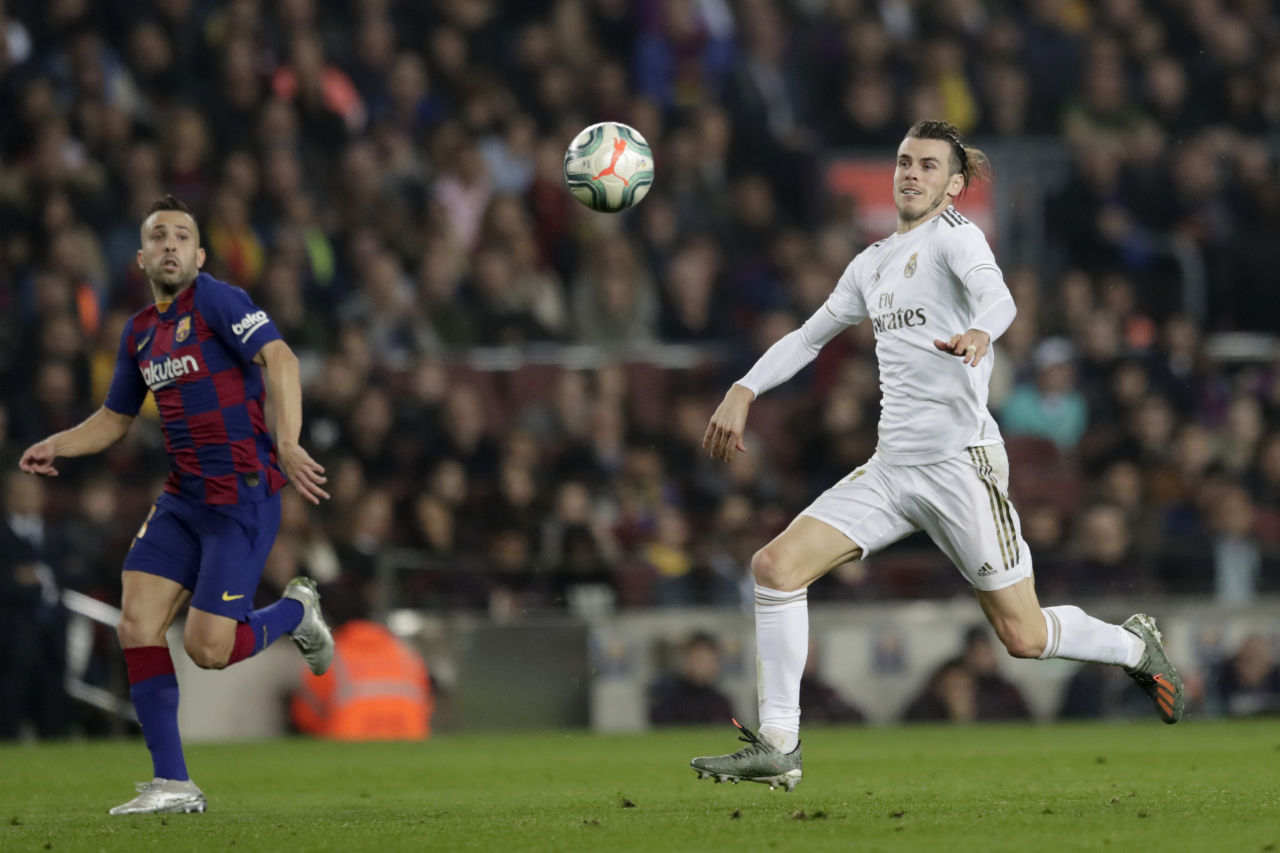 (AP-Yonhap)
Early in the second half, yellow beachballs were thrown onto the field while blue banners bearing the slogan of Democratic Tsunami: 'Spain, sit and talk', were also held up.

Four hours before kick-off, thousands had gathered at all four corners of the stadium to hold the same blue banners and wave Catalan flags, while some blocked traffic too.

But the demonstrations were peaceful, in stark contrast to the ugly scenes that would come a few hours later.

Both teams had departed from the same hotel and aside from whistles and insults directed at the Madrid team bus, each arrived without incident. Club president Florentino Perez gave a thumbs up as he walked in.

Gareth Bale was last to get off, by which time he might have known he was starting for the first time in four matches. Ramos played in his 43rd Clasico, a record for any player in history.

For Barcelona, Sergio Busquets was included in the line-up first announced before he was swapped out for Ivan Rakitic. Barca claimed it had been a communication error.

If it was, it was not the first mistake of the night, with a frantic first half full of them.

Real were the better side in the opening half an hour although Luis Suarez might have scored early had he controlled Jordi Alba's cross at the back post.

There was a goalline clearance at both ends as Casemiro's header bounced up and had to be hooked away by Gerard Pique before Thibaut Courtois punched out to Messi but his shot was blocked by Ramos.

Shortly after the interval, stewards ran on to collect the beach balls and then Barcelona twice should have scored, only for Lionel Messi and Suarez both to fluff finishes in quick succession.

Bale scored with 15 minutes left but his provider Ferland Mendy was a fraction offside. Neither team wanted to go for broke in the latter stages. (AFP)