[ The Korea Herald – Send E-mail ]
[Diplomatic circuit] UAE Embassy looks to Expo 2020 to bolster ties with Seoul
By Kim Bo-gyung
Published : Dec 17, 2019 - 11:59
Updated : Dec 17, 2019 - 11:59
In the run up to Expo 2020 Dubai, Emirati Ambassador to South Korea Abdulla Saif Al Nuaimi said the event would boost bilateral relations as next year marks the 40th anniversary of the establishment of diplomatic ties between the two countries.

“I’m quite confident that Republic of Korea’s remarkable participation in the EXPO 2020 Dubai will reinforce the ‘special strategic partnership’ and enhance the bilateral exchanges in all fields between the two countries,” Al Nuaimi said at the Expo 2020 Dubai countdown event in central Seoul on Dec. 9. 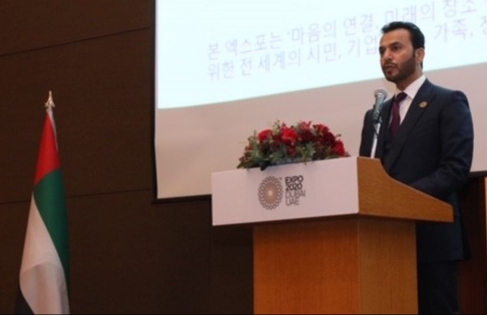 Emirati Ambassador to South Korea Abdulla Saif Al Nuaimi delivers a speech at the Expo 2020 Dubai countdown event in central Seoul on Dec. 9. (UAE Embassy in Korea)
The Expo is set to run from Oct. 20, 2020, to April 10, 2021, with 200 participants from 192 countries. The theme of the event is “Connecting Minds, Creating the Future.”

For the first time in world expo history, each participant, including Korea, will be given its own pavilion, the embassy said.

“The Expo is very special for the UAE as it is the first of its kind to be held in the Middle East, North Africa and South Asia region. It is also the first Expo to be hosted by an Arab nation,” Al Nuaimi said.

The next World Government Summit is scheduled to take place during the expo in November 2020, bringing in 30 international organizations, 10,000 high-level officials and 100,000 participants from around the world, the embassy said.

In response to concerns about sustainability, the embassy said more than 80 percent of the buildings constructed for the expo would eventually form part of the District 2020 future city, and the sustainability pavilion would serve as a facility for children and science.