The first Hungarian cultural center in Korea opened last week, coinciding with the 30th anniversary of diplomatic relations between South Korea and Hungary.

“It is our mission to provide various quality programs, to cooperate and exchange with Korean artists and cultural institutions, and to show the extremely rich cultural treasures of our country, Hungary,” Cosma said in a statement. 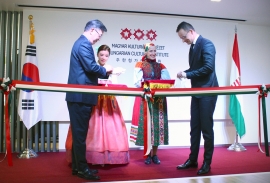 Hungarian Minister of Foreign Affairs and Trade Peter Szijjarto (right) attends the opening ceremony of the Hungarian Cultural Institute in central Seoul on Dec. 12. (Embassy of Hungary in Korea)

“We hope that the Hungarian Cultural Institute and this exhibition will provide novel and extraordinary experiences in the already vibrant multicultural environment of Seoul.”

This year the two countries celebrate the 30th anniversary of diplomatic ties established in 1989 and in the first half of this year Korea became the No.1 investor in Hungary, surpassing Germany.

The institute’s first exhibition “Hands that Bond” organized by the Hungarian Academy of Arts will run until Jan. 15, displaying both traditional and modern Hungarian work.

Paving the way for greater exposure of Hungarian arts here, the first Hungarian Film Day in Seoul took place on Dec. 14 in central Seoul as part of celebrations marking the opening the Hungarian Cultural Institute.

Seven films were screen at the event: four feature films – “Kincsem-Bet on Revenge” by Gabor Herendi; “Made in Hungaria” by Gergely Fonyo; “Fever at Dawn” by Peter Gardos; “Tail Tales” by Attila Szasz — and three short films -- “Sing” by Kristof Deak; “My Guide” by Barnabas Toth; and “Maestro” by Geza M. Toth.

Meanwhile, at the cultural center opening Szijjarto touted vibrant exchanges between the two countries on the cultural, economic and people-to-people fronts.

During his short trip to Seoul Szijjarto signed a memorandum of understanding with Dankook University to foster Hungarian language and cultural education.

In accordance with the agreement, a visiting professor from Hungary is to teach Hungarian language and culture at Dankook University starting next March.