Academics from around the world got together in Seoul on Wednesday to discuss the global success of BTS and K-pop in general.

Sponsored by Big Hit Entertainment, which houses the likes of BTS and TXT, the global seminar “K-Pop Beyond BTS” took place at Yonsei University, attracting scores of scholars, journalists and YouTubers. 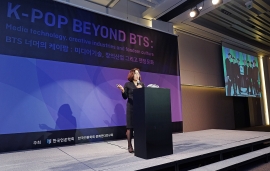 In a keynote speech, Hong Seok-kyeong, a professor of communication at Seoul National University, said BTS and other K-pop boy bands offer “soft masculinity” against a backdrop of growing levels of toxic masculinity.

Hong’s comment comes at a time when some of the traditional masculine norms have come under scrutiny while groups like BTS, in her view, have helped break stereotypes of Asian men in the West, namely that they are and dominant and static.

Though K-pop holds great visual appeal for fans around the world, one study found that it was music that mattered the most to BTS fans.

The survey, conducted by Jin Dal-yong of Canada’s Simon Fraser University, involved a total of 214 BTS fans and found that enjoyment of music was most important to them, with 41 people saying so. The bandmates’ personalities or attitudes, as well as their overall message, came next. Many fans also said the group’s main appeal was in its performance style.

Kicking off the first segment of the four-part seminar, Areum Jeong, an assistant professor at Sichuan University in China, turned the attention toward fans, who she argues have become much more organized and internet-savvy over the years.

The shift, which involves strategic, careful planning, preparation and research, is reflected in the way fans consume music -- downloading and streaming constantly in an effort to better promote their favorite groups.

Keeping the relationship tight between the stars and fans is also important, according to Michelle Cho, an assistant professor of East Asian studies at the University of Toronto in Canada.

Cho says content like reaction videos and meokbang -- live broadcasts in which the creators eat on camera -- can transmit happiness and help K-pop idols bond with their fans, as well as helping fans bond with each other.

The event also highlighted negative stereotypes of K-pop fans, such as the idea that they are naive, but professor Jeong says fans know what they are doing.

“While the media tends to dismiss fans as young people who have been brainwashed by the capitalist entertainment industry, this research argues K-pop fans possess their own agency and fully understand the Korean music industry system,” she said during the event.