A website that provides foreign language translations of local menus was launched Wednesday.

According to the state-run Korea Tourism Organization, Food Trip in Korea (foodtrip.or.kr) was launched Wednesday afternoon with translations of 8,500 Korean dishes in English, Japanese and Chinese as its main feature. The service had been previously provided via the agency’s Visit Korea (visitkorea.or.kr) site.

The tourism organization plans to add a mobile page of the website, various menu designs and information on local eateries and popular Korean delicacies for foreign visitors. 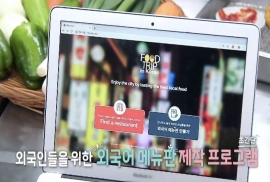 Commemorating the website’s launch, the agency will hold an event from Dec.12-21, with the first 300 applicants winning a physical copy of their new foreign language menu.

Inaccurate translations on menus had long been a subject of criticism, even ridicule, among foreign visitors, with small restaurant owners often resorting to free translation services.

Among common mistakes making news were “gomtang” translated as “bear soup,” a confusion that derives from the word “gom” meaning both bear and boiling soup. Other common mistakes include “dynamic stew” (dongtae jjigae) and “six times,” (yukhoe) which the National Institute of Korean Language recommended translating to “pollack stew” and “beef tartare” in an official guide distributed in 2014.