Imagine a Middle Eastern man walking bare feet on the streets of Mecca in the 1970s, who soon takes out his keys and drives away in a Cadillac. This interesting juxtaposition of a Bedouin city and the influx of Western influence was a common scene in Mecca at the time, when Wael Shawky was a child in the city.

His experiences in Mecca have influenced him a great deal, said Shawky, whose artistic efforts are mainly invested in grappling with the history of Arab world to better understand its present.

“Studying the old history is a way of understanding the sources of our modern life,” Shawky said during an interview with The Korea Herald at Barakat Contemporary, located in the Samcheong-dong area in Seoul. 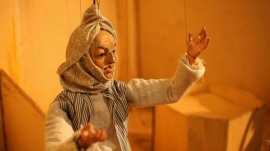 In his famous marionette trilogy “Cabaret Crusades,” a series of videos on the Crusades, the artist examines one of the earliest historical events in which the Arab world engaged with Western forces, followed by a succession of invasions by Portugal, France and Britain.

According to Shawky, major change came in the 1930s with the discovery of oil in Saudi Arabia, which led to a new relationship between the Gulf communities and US and British oil companies.

“Petropolitics” led to dramatic transformations in the Arab world, which is the subject of his upcoming film series “The Gulf Project.”

Shawky is as much a history researcher as he is an artist. Through his works of art, Shawky digs into historical events to check if they are reliable enough. If a certain historical source seems farfetched, he intervenes with his art, with a view to question actuality and to break away from the falsehood.

Shawky said there are many loopholes in researching historical sources of the Arab world because the Arab communities used to heavily rely on oral transmission, instead of written records.

Another issue in dealing with the oral transmission-based history of the Arab world is that there are many different versions of history, altered and manipulated to suit those in power, he added. 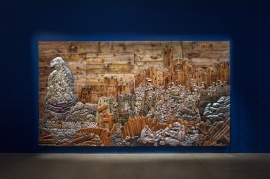 The wooden relief work “Cabaret Crusades: The Capture of Jerusalem by Jacques de Molay in 1299 (after Claude Jacquand, 1846)”

Sometimes, visual records are not to be trusted either. In his large-scale wooden relief work on display at SeMA, Shawky has reproduced de Molay’s battle in Jerusalem as depicted by French painter Claude Jacquand in 1846 -- a battle that never took place.

Art is a proper tool in dealing with vague areas, as well as in offering alternative narratives that can refresh what many people now know of or how they understand the Arab world, Shawky said.

In making films, Shawky also tries to move away from the images and narrative structures that Hollywood films might use because one is apt to strengthen the stereotypes when using similar methods. “You don’t want to be a person feeding the cliche or stereotypes,” Shawky said. 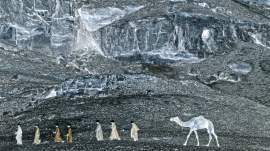 The final part of his film trilogy, “Al Araba Al Madfuna,” on show at Barakat Contemporary in Seoul, was shot in negative as a way of keeping off visual spectacles. To minimize the role of actors, amateur child actors were used.

The priority, for Shawky, has always been the history -- not a melodramatic storyline. The use of marionettes or children actors are relatively free of different types of biases, including gender, the artist added.

The final installment of “Al Araba Al Madfuna,” in which he mixes his experience in an Egyptian village called Al Araba Al Madfuna and a short story by Mohamed Mustagab, will be on view until Jan. 31 at Barakat Contemporary.