SEJONG -- The number of people over the age of 70 is rapidly increasing in South Korea, which was dubbed an “aged society” two years ago, according to standards set by the United Nations.

Further, the number of people aged 100 or over has also posted the highest growth among all age groups over the past decade.

There were 20,102 centenarians in Korea as of November -- the highest so far -- as per the monthly demographic data of the Ministry of Interior and Safety, with 4,812 men and 15,290 women.

A notice board at Sejong City Hall in Boram-dong publicizes the daily updates for its regional population. The administrative-oriented city, which has on average the youngest residents in the country with 55 centenarians as of November. (Yonhap)

Sejong, whose population is 338,647 -- it was founded only seven years ago -- had the lowest number of centenarians (55) in the country. 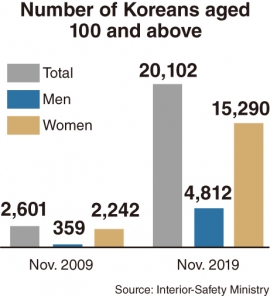 Collectively, Koreans aged 70 and above tallied 5.46 million, accounting for an all-time high -- 10.5 percent, of the total population of 51.85 million. The group outnumbered the second-youngest group, aged 10 to 19, which was 4.97 million.

“Given that the percentage of Koreans aged 65 or over of the population stayed at 10.6 percent a decade earlier, the nation should make full-fledged countermeasures against more critical demographic change in the coming decades,” said a government official.

Korea started being classified as an aged society in July 2017, when the proportion of those, aged 65 or over, topped the 14 percent mark. It became an aging society -- which refers to countries whose senior-population percentage top 7 percent -- in 2000. The country is expected to be a super-aged society, whose senior population takes up 20 percent, in about four to five years.

While Sejong and Incheon reported a population increase compared to the previous month, the other six -- Seoul, Busan, Daegu, Daejeon, Gwangju and Ulsan -- saw their figures drop.

The number of Sejong citizens increased by 2,291 in November from a month earlier, while the nation’s total population inched up 722 (down 575 for men and up 1,297 for women).