Suwon IPark Museum of Art is holding a solo exhibition dedicated to Gary Hill, a US-based artist considered one of the pioneers of video art, titled “Gary Hill: Momentombs.”

The exhibition in Suwon, Gyeonggi Province, features 24 works from the 1970s to date.

Hill gained recognition in the art scene in the 1970s and 1980s, when he began to produce video installations that incorporated sound and text. The artist, who often explores issues connected with the physicality of language, the act of speaking, and virtual space and reality, received the Golden Lion at the Venice Biennale in 2017.

“Cornered” is a video projection installed in a corner in which Hill juxtaposes images from different times and spaces. The installation throws images that have been pre-filmed together with others being captured in real time by a camera in the exhibition hall.

On view on the other side of the entrance is “Cut Pipe” (1992), an installation consisting of two aluminum pipes that face each other. On the cut surface of a pipe, Hill has put a black-and-white video of hands manipulating speakers as a voice coming from the speakers reads from a written text.

Many of the videos in the exhibition are large enough to occupy the whole gallery space and the walls, creating immersive experiences for the viewers.

On the first floor, there is a set of three video installations that present images of the ocean and waves. “Isolation Tank” (2010-11), a video projection of computer-generated images of the ocean, is shown at the center with a “Learning Curve” installation on either side. The “Learning Curve” series, featuring school-inspired desks, also presents videos of waves in continual spiraling motion on screens at the end of each desk. 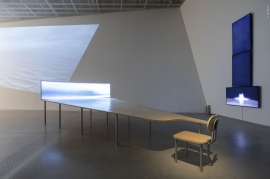 “Viewer” (1996) is another massive video installation, measuring about 14 meters wide. The five-channel video installation shows life-sized images of 17 workers. The individuals, though they were filmed separately, appear to be lined up side by side and look directly at the viewers.

Many of Hill’s works use sound and text, intricately woven so as to create a multisensory experience that is not easily digested.

“Circular Breathing” is a five-channel video installation based on a musical technique that horn players use to play one continuous note, seemingly without taking a breath. The images in this video slide from one side to another. The images -- taken from the streets of Tangier, a ship on the open seas and the interior of a mosque -- move along with sounds extracted from the filming sites, as well as “Vexations” by pianist Eric Satie.

“Wall Piece” (2000) is another work that makes extensive use of words, images and sounds. In this video, shown in a black box setting, a man repeatedly flings himself against a wall, speaking words every time he bumps into it.

The exhibition, which the museum says is the largest ever of Hill’s works in Asia, runs through March 8.