TOKYO -- After his squad lost to Japan in the championship final of the Premier12 baseball tournament, South Korean manager Kim Kyung-moon said it was all his fault that the team came up short.

Kim, long known for being fiercely loyal to his players, isn't one to throw his players under the bus. But he came as close to doing so as he ever had Sunday, when he acknowledged that the heart of his order never quite got it going. 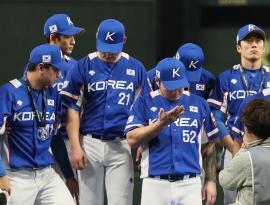 "Our sluggers never came around, and that just goes to show you baseball is not an easy game to play," Kim said. "I think they put too much pressure on themselves, and they couldn't overcome that burden."

Cleanup Park Byung-ho went 0-for-4 in the final and batted just 5-for-28 for the tournament without an extra-base hit. This is the same slugger who led the Korea Baseball Organization this year with 33 home runs.

Kim stuck with Park as his cleanup hitter for the entire tournament, while blocking out noise that Park had to be moved out of that spot. Kim waited for a turnaround that never came.

Park wasn't the only big bat that failed to produce at the Premier12. Yang Eui-ji, a hard-hitting catcher who won the KBO batting title with a .354 average, ranked dead last on the national team by hitting at a .087 clip, with two hits in 23 at-bats.

At least Yang offered value on defense as the rock steady presence behind the plate. Park, who played perhaps the least valuable defensive position at first base, simply had to do more at the dish.

These adventures by the middle-of-the-order bats are especially concerning, given that South Korea will have to compete at the next Olympics in less than a year from now and those types of players don't just fall out of the sky.

During the Premier12, South Korea received production from the top third and the bottom third of the lineup. But there will come a time when the mashers in the middle will have to put up some numbers.

For all its young talent, South Korea doesn't appear to have a viable successor to Park if the veteran slugger struggles. The team will have to hope against hope that Park and other veterans will have turned it around by the time the Olympic Games roll around.

Speaking of which, South Korea secured the berth for the 2020 Tokyo Olympics during the Premier12, despite losing to Japan in both the Super Round finale and the championship final Saturday and Sunday, respectively.

The Premier12 doubled as an Olympic qualifying event for Asia/Oceania. Because Japan was already in the Olympics as the host, South Korea had to rank ahead of Chinese Taipei and Australia in the Super Round to grab the lone Olympic spot at stake from the region.

South Korea didn't make it easy on itself after losing to Chinese Taipei 7-0 last Tuesday. The country needed some help from others, and the United States obliged by beating Chinese Taipei later in the Super Round.

It shouldn't have come down to that, but the dearth of production from the heart of the lineup nearly cost South Korea. (Yonhap)