South Korea, US to hold annual defense talks in Seoul next week

South Korea and the United States will hold their annual defense ministers’ talks in Seoul next week to reaffirm their alliance and discuss issues including the transfer of wartime operational control, the Ministry of National Defense said Friday.

Defense Minister Jeong Kyeong-doo and his US counterpart Mark Esper will attend the 51st Security Consultative Meeting on Nov. 15, where they are expected to touch on pending issues, such as Seoul’s intelligence-sharing pact with Tokyo.

Esper will kick off his trip to South Korea and three other countries -- Thailand, the Philippines and Vietnam -- on Wednesday, the US Defense Department said in a statement Thursday. 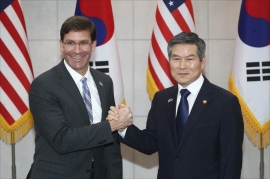 During the annual meeting, the two defense chiefs are expected to talk about the General Security of Military Information Agreement, inked between South Korea and Japan at the encouragement of the US.

Amid the ongoing trade row with Japan, South Korea has announced it will withdraw from GSOMIA, which will expire Nov. 22 at midnight.

Washington has opposed Seoul’s decision, saying it will weaken the trilateral security alliance in the region. But the South Korean government has said it will only reconsider its decision to pull out of GSOMIA if Japan withdraws its trade restrictions on Korea.

The Defense Ministry here only said the two defense chiefs of Seoul and Washington will discuss the trilateral relationship with Japan. However, the US said it will push for GSOMIA to be extended.

“We are hopeful, we’re optimistic, we’re going to continue to push on it,” Pentagon spokesman Jonathan Hoffman said during a press briefing Thursday.

“I can practically guarantee that it will be part of our conversations when we’re in Korea next week, but it’s something that we would like to see resolved, so that all of us can focus on the biggest threats in the region, which is North Korea’s activities, and then the Chinese efforts to stabilize the region.”

During the Security Consultative Meeting, the defense ministers will discuss transferring wartime OPCON from Washington to Seoul, and review the results of the initial operational capability test that they conducted during their joint military exercise in August.

“The two sides are to discuss when to conduct a full operational capability test and schedule for its preparation,” the Defense Ministry here said in a press release.

The allies have been working together for the condition-based OPCON transfer, testing Korea’s capabilities in leading the allies’ defense mechanism and in responding to North Korea’s nuclear and missile threats.

In the meeting next week, the two sides will also discuss the timely return of former sites of US military bases.

After the meeting in Seoul, the two ministers are expected to meet again in Bangkok at the ASEAN Defense Ministers’ Meeting Plus from Nov. 16 to 19.

After arriving on Thursday, the US delegation led by Esper will attend the Alliance Dinner event, co-hosted by Seoul’s Defense Ministry, the Korea-US Alliance Foundation and the Korea Defense Veterans Association.