Poet once at forefront of #MeToo movement publishes collection in English

Poet Choi Young-mi, one of the leading voices in the #MeToo movement in Korea’s literary scene last year, has published her first collection of poems in English, “The Party Was Over.”

The collection includes the poem “Monster” (2017), which Choi described as being based on her experience of sexual harassment. The revelation fueled the #MeToo movement in Korea, which shook up the country in early 2018 after a female prosecutor accused her superiors of sexual harassment.

The collection features 25 poems selected from six volumes of poetry originally published in Korea. The works were translated by Alice Kim and Seung-hee Jeon. 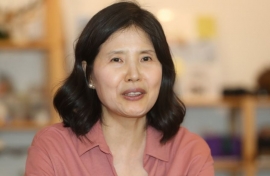 The book begins with “Already,” a piece conceived at the hospital where the poet’s mother was hospitalized, according to her blog.

The 58-year-old poet’s most recent book of Korean poems was released in June.

Born in 1961, Choi made her literary debut in 1992 and published her first poetry collection, “At Thirty, The Party Was Over,” in 1994. Twenty-two years later, she was awarded the Leesoo Literature Prize, a well-known literature prize in Korea.

The #MeToo movement, which sparked public outcry in Korea last year, led to a series of accusations being brought against high-profile figures, including those in the cultural field.

Choi will speak at the fourth World Conference Women’s Shelters, held Nov. 5 to 8 in Kaohsiung, Taiwan. The conference is aimed at raising awareness of violence against women. It is expected to be attended by some 1,500 activists from 120 countries, according to a report by Herald Business.