Bestselling Swedish novelist Jonas Jonasson visited South Korea upon the release of his latest novel, “The Accidental Further Adventures of the 100-Year-Old Man,” a sequel to his bestseller “The 100-Year-Old Man Who Climbed out of the Window and Disappeared.”

Jonasson’s first story about 100-year-old Allan Karlson sold more than 10 million copies around the world and was made into a film. Though the sequel came out in English in July 2018, it took more than a year for the Korean translation to be released.

The Korean version, published in September under Open Books, has a more explicit, alarming title, which translates to “101-Year-Old Man Who Ran Away With Nuclear.” 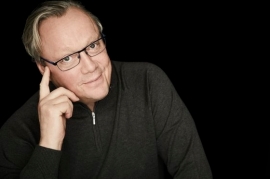 “I wrote this book mainly during 2017. (In the previous book) I dealt with old major political events, but for this, I kind of wrote it live as they happened,” Jonasson said at a press event held Friday in Gwanghwamun, central Seoul.

In the book, now-101-year-old Allan Karlson gets lost on a hot air balloon trip. He is rescued by a North Korean ship and meets North Korean leader Kim Jong-un, then gets mixed up in a complex diplomatic crisis, meeting global figures including German Chancellor Angela Merkel and US President Donald Trump.

Jonasson, a 58-year-old journalist-turned-novelist, confessed that he was not able to do much research about North Korea. Information was limited, and adding to that, he realized he would not “get close enough to the truth.”
“The scariest thing about getting here (in Seoul) is that I have invented so many (stories) about North Korea and (people in Europe), they believe everything I write. You (South Korean readers) are not easy to fool,” he said.

What encouraged him to write was advice from an author colleague: “Do as much research as you can. But never let facts stay in your way for a good story.”

“It is so much easier to poke with guys like Stalin than living people,” he said. “If you are a leader, you must accept to be made fun of. That is because, from your position, you are looking down on people rather than up.

“I think the world would be a better place, if leaders had more humor and self-distance. I just saw, earlier today, Kim Jong-un riding a white horse. That picture didn’t signal the self-distance thing,” he said.

Jonasson became a star with his 2009 debut “The 100-Year-Old Man Who Climbed out of the Window and Disappeared.” After the release of that first book, the celebrated author recounted, “everything went crazy,” as its success far surpassed his expectations.

“People tend to live great lives, they have great wife or husband back home. But nothing too exciting happens in people’s lives. Maybe they should climb out their own windows and do something else. But that’s not easy. What people can do is they climb out the window with me for about 400 pages, and then they climb back to their life,” Jonasson said.

After meeting with fans at Kyobo Book Centre’s Gwanghwamun and Gangnam branches over the weekend, Jonasson is to take the podium at Dearlife book cafe in Hapjeong, western Seoul, Tuesday.